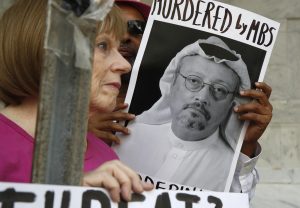 In this Oct. 10, 2018, file photo, people hold signs during a protest at the Embassy of Saudi Arabia about the disappearance of Saudi journalist Jamal Khashoggi, in Washington. The Trump administration’s ongoing courtship of Saudi Arabia is on pause over allegations that the key U.S. ally is involved in the mysterious disappearance of a Saudi writer and dissident who went into his nation’s consulate in Turkey but never came out. (AP Photo/Jacquelyn Martin)

Secretary of State Mike Pompeo traveled to Saudi Arabia and Turkey to visit with their respective leaders regarding the disappearance of U.S.-based Saudi journalist Jamal Khashoggi. Turkish officials suspect Khashoggi was allegedly murdered inside the Saudi consulate in Turkey. Upon his return, Pompeo advised President Donald Trump to give the Saudis “a few more days” to complete their own investigation. President Trump has expressed reservations about allegations against Saudi Arabia, but said there would be “very severe” consequences if they did murder Khashoggi.

Microsoft co-founder Paul Allen died from complications of non-Hodgkin’s lymphoma at age 65. Among one of the world’s wealthiest individuals alongside his colleague Bill Gates, Allen was also a prolific philanthropist.

The 125-year-old retail giant Sears filed for bankruptcy protection and announced a plan to close 142 stores nationwide and take other measures to attempt to keep the business alive.

Back home, the federal budget deficit expanded to $779 billion, the highest since 2012, in the first full fiscal year of Trump’s presidency. Court arguments also began in Harvard’s affirmative action case, alleging that the university discriminates against Asian-American students.

The Trump administration announced its intention to withdraw from the Universal Postal Union — a 144-year-old treaty between 192 nations, which allows some foreign countries, such as China, to have discounted shipping rates to the United States.

President Trump also threatened to slash humanitarian aid, scrap a tentative trade deal with Mexico, and send the U.S. military to close the southern border if the caravan of thousands of Central American migrants reaches the U.S.-Mexico border in the coming weeks.

USA Gymnastics lost its second president in two months with the resignation of former U.S. Representative Mary Bono. The organization continues to struggle to regain trust and its reputation following the Larry Nassar scandal.Former American actress and current Duchess of Sussex Meghan Markle announced that she is pregnant with her first child with Britain’s Prince Harry. The baby is due in spring 2019.

Top line: “After a whirlwind emergency trip to Saudi Arabia and Turkey, Secretary of State Mike Pompeo told President Donald Trump on Thursday that the United States needs to give the Saudis “a few more days” to investigate the fate of journalist Jamal Khashoggi. Pompeo did not say whether he believes Khashoggi is dead.” 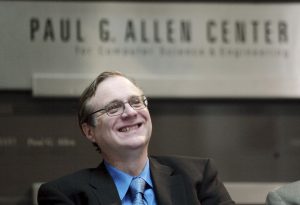 In this Oct. 9, 2003 file photo, Paul Allen, Microsoft co-founder for the dedication of the Paul G. Allen Center for Computer Science and Engineering at the University of Washington in Seattle. Allen, billionaire owner of the Trail Blazers and the Seattle Seahawks and Microsoft co-founder, died Monday, Oct. 15, 2018 at age 65. Earlier this month Allen said the cancer he was treated for in 2009, non-Hodgkin’s lymphoma, had returned. (AP Photo/John Froschauer, File)

Top line: “Microsoft Co-Founder Paul Allen died from complications of non-Hodgkin’s lymphoma on Monday afternoon. Allen’s Vulcan Inc. announced that he died in Seattle at 65 years old. Allen ranked among the world’s wealthiest individuals. As of Monday afternoon, he ranked 44th on Forbes’ 2018 list of billionaires with an estimated net worth of more than $20 billion. Through Vulcan, Allen’s network of philanthropic efforts and organizations, the Microsoft co-founder supported research in artificial intelligence and new frontier technologies. The group also invested in Seattle’s cultural institutions and the revitalization of parts of the city.” 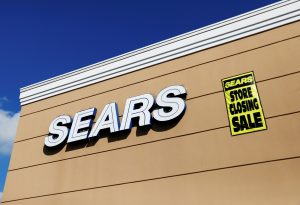 Top line: “Sears, which more than a century ago pioneered the strategy of selling everything to everyone, filed for bankruptcy protection early on Monday and laid out a plan for turning its business around. The company long ago gave up its mantle as a retail innovator, falling far behind big-box rivals like Walmart and Home Depot and the e-commerce giant Amazon. Now, Sears is using a Chapter 11 filing in Federal Bankruptcy Court in New York to cut its debts and keep operating at least through the holidays. The company, which said it would close 142 unprofitable stores, faces long odds in trying to revive its fortunes. It will need creditors to agree that it should be reorganized rather than liquidated, as other bankrupt retailers have been.” 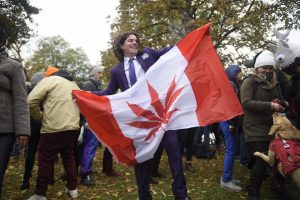 A person dancing with a replica of the Canadian flag where the “maple leaf” has been replaced by marijuana leaf during the Cannabis Legalization Day celebration in Toronto, Canada. Recreational marijuana became legal in Canada on 17th October, 2018. To celebrate the day people gathered at Trinity Bellwoods Park around noon. The party continued until late in the evening in Toronto, Canada. (Photo by Arindam Shivaani/NurPhoto via Getty Images)

Top line: “Canada has become the second country after Uruguay to legalise possession and use of recreational cannabis. Medical marijuana has been legal in the country since 2001. But concerns remain, including about the readiness for police forces to tackle drug impaired driving. Information has been sent to 15m households about the new laws and there are public awareness campaigns.”

Top line: “The U.S. budget deficit grew to $779 billion in Donald Trump’s first full fiscal year as president, the highest since 2012 amid tax cuts and spending increases. The budget gap for the 12 months through September was 17 percent wider than the same 12-month period a year earlier, as spending rose 3.2 percent and revenue gained just 0.4 percent, according to a Treasury Department report released Monday. The deficit as a share of total economic output was 3.9 percent in fiscal 2018, up 0.4 percentage point from the prior year. The government’s fiscal year runs from Oct. 1 to Sept. 30.”

Top line: “The Trump administration announced Wednesday it will withdraw from a 144-year-old postal treaty, claiming the treaty gives countries like China and Singapore an unfair advantage and floods U.S. markets with cheaper e-commerce packages. The withdrawal echoes President Donald Trump’s history of accusatory rhetoric against China for manipulating trade by subsidizing its manufacturers. Trump volleyed billions of dollars in tariffs with China over the summer, raising concerns of higher domestic manufacturing costs. A senior administration official said Wednesday that the withdrawal from the postal agreement is not related to the tariffs, but the move is aimed at protecting U.S. manufacturers and the U.S. postal system.”

Top line: “Court arguments began this week in Students for Fair Admissions v. Harvard, a lawsuit in which a group of Asian-American students allege that Harvard University discriminated against them on the basis of their race. In its lawsuit, Students for Fair Admissions, a group led by Edward Blum — a consistent opponent of affirmative action — accuses Harvard’s admissions policies of being unlawful because they engage in “racially balancing” and fails to consider race-neutral admissions plans, among other accusations. Harvard has denied the allegations. The case, in which more than a dozen friend-of-the-court briefs have been filed and which opened to a full courthouse with observers in overflow rooms, is being closely watched as it could affect race-conscious admissions policies at elite colleges across the U.S. It is expected to take three weeks.”

Top line: “The revolving door of USA Gymnastics’ top leadership keeps spinning as the organization struggles to recover from the Larry Nassar scandal. Less than a week after taking over USAG, former US Rep. Mary Bono has resigned as interim president. That means four high-ranking officials have left USAG in the past six months — even though most came on board after the Nassar sex abuse scandal. Bono took the helm just a month after embattled president and CEO Kerry Perry quit. Perry, who had only been on the job for nine months, was criticized for what many considered to be inadequate action and boilerplate soundbites during the Nassar abuse fallout. On Tuesday, four days after she started her new job, Bono announced her resignation.”

Top line: “As some 3,000 Hondurans made their way through Guatemala, attention — and pressure — turned to Mexico, after U.S. President Donald Trump threatened Thursday to close the U.S.-Mexico border if authorities there fail to stop them — a nearly unthinkable move that would disrupt hundreds of thousands of legal freight, vehicle and pedestrian crossings each day. With less than three weeks before the Nov. 6 midterm elections, Trump seized on the migrant caravan to make border security a political issue and energize his Republican base.”

Top line: “Prince Harry and Meghan Markle are going to be parents! The Duke and Duchess of Sussex, who tied the knot on May 19, are welcoming their first child together next year. Here’s everything you need to know about the next royal baby.”

~HeatherC is reading about Celebrating Hispanic Heritage Month by PopSugar