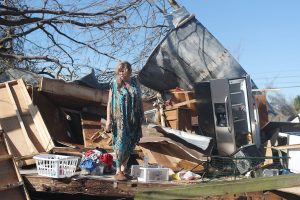 PANAMA CITY, FL – OCTOBER 11: Kathy Coy stands among what is left of her home after Hurricane Michael destroyed it on October 11, 2018 in Panama City, Florida. She said she was in the home when it was blown apart and is thankful to be alive. The hurricane hit the Florida Panhandle as a category 4 storm. (Photo by Joe Raedle/Getty Images)

Hurricane Michael devastated communities in the Florida Panhandle and Georgia before weakening to a tropical storm and flooding already hard-hit residents of the Carolinas who are still recovering from last month’s Hurricane Florence. At least 12 people died in the historic storm, ranked one of the four most powerful hurricanes to ever hit the United States.

Nikki Haley announced her resignation as United States ambassador to the United Nations during a press conference with President Donald Trump, where he praised her work and suggested he would be open to her return to the White House in the future. Haley, also a former governor of South Carolina, will continue in the role through the end of the year.

The world only has until around the year 2030 to stem catastrophic climate change, according to a stark report released by the Intergovernmental Panel on Climate Change. However, the takeaways from the report also takes an optimistic tone in its call to action.

Turkey released U.S. evangelical pastor Andrew Brunson from detention, two years after arresting and charging him with espionage. Brunson was convicted, but his three-year-and-1.5-month sentence reduced to time served.

The release of Brunson eases tensions between Turkey and the U.S. at a time when the two nations are embroiled in a dispute with a third nation, Saudi Arabia, over the disappearance and possible murder of Saudi journalist Jamal Khashoggi inside the Saudi consulate in Turkey. Khashoggi, a prominent critic of the Saudi Arabian government and its crown prince in columns for The Washington Post and other outlets, is a U.S. resident. President Trump “vowed to get to the bottom” of the case, but resisted suggestions to consider halting a $110 billion sale of weapons to Saudi Arabia, saying he prefers “other ways of handling this situation.”

U.S.-China relations also remained tense, this time as a result of the arrest of a Chinese intelligence officer for allegedly conspiring and attempting to steal trade secrets from a U.S. aviation company.

In business news, CVS Health and Aetna got conditional approval from the Justice Department for a $69 billion merger that would combine their influence in pharmaceutical provision and health insurance at a time when health care is a key topic of national concern.

On the tech front, Facebook made headway in the effort to tackle fake news and influence campaigns, stating that they had deleted over 800 spam accounts and pages. Google announced it was shutting down Google+ after a security breach revealed millions of users’ data.

The Dow sank nearly 1,400 points in two days, shedding more than 5.2%. Here’s how it impacted the stock market.

Top line: “Hurricane Michael is no more. The violent storm that ripped through the Southeast, leaving a trail of death and destruction from Florida to Virginia, finally moved off the coast over the Atlantic Ocean overnight. It is now known as Post-Tropical Cyclone Michael. Michael made landfall in the Florida Panhandle on Wednesday as a Category 4 hurricane — the strongest on record to hit the area — and charged north through Georgia and into the Carolinas and Virginia, wreaking havoc and causing emergencies. In the storm’s wake lay crushed and flooded buildings, shattered lives and at least 12 deaths, a number that officials worry could rise.” 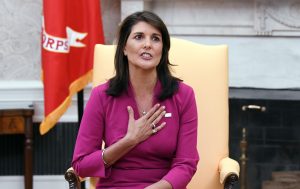 Nikki Haley, the United States Ambassador to the United Nations speaks during a meeting with US President Donald Trump speaks in the Oval office of the White House October 9, 2018 in Washington, DC. – Nikki Haley resigned Tuesday as the US ambassador to the United Nations, in the latest departure from President Donald Trump’s national security team. Meeting Haley in the Oval Office, Trump said that Haley had done a “fantastic job” and would leave at the end of the year. (Photo by Olivier Douliery / AFP/ Getty Images)

Top line: “President Donald Trump announced on Tuesday that US Ambassador to the United Nations Nikki Haley has resigned and will leave her post by the end of the year. Sitting side-by-side in the Oval Office, Trump praised Haley as a “fantastic person” who has “done an incredible job” and said he would gladly welcome her back into his administration down the line.” 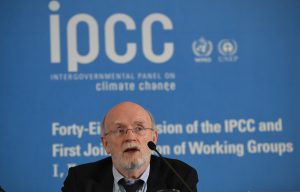 Hans-Otto Portner, co-chair of the IPCC Working Group II, speaks during a press conference of the Intergovernmental Panel for Climate Change (IPCC) at Songdo Convensia in Incheon on October 8, 2018. – Avoiding global climate chaos will require a major transformation of society and the world economy that is “unprecedented in scale,” the UN said on October 8, in a landmark report that warns time is running out to avert disaster. (Photo by JUNG YEON-JE/AFP/Getty Images)

3. Five things we have learned from the IPCC report – BBC News, Matt McGrath

Top line: “BBC environment correspondent Matt McGrath outlines five key takeaways from one of the most important reports on rising temperatures issued by the Intergovernmental Panel on Climate Change. Their study, on the impacts and possible methods of keeping temperatures from warming by more than 1.5C, has just been launched in South Korea.”

Top line: “Turkey has ordered the release of U.S. pastor Andrew Brunson, who has been in detention since 2016 in a case that has raised tensions between Turkey and the U.S. A court in the western city of Izmir actually sentenced Brunson to three years and 1.5 months in prison, according to Turkey’s state news agency Anadolu. However, as NPR’s Peter Kenyon in Istanbul explains, the court says he will serve no more time, considering his health issues.”

Top line: “Saudi Arabian journalist Jamal Khashoggi, a critic of the government who lived in self-imposed exile in the United States, went missing Oct. 2 after entering the Saudi consulate in Istanbul to obtain paperwork he needed to marry his Turkish fiancée. He has not been seen since, leading to various theories about what happened to him. Khashoggi may have been abducted or slain inside the consulate. A surveillance video shows him entering the consulate, but there are no images of him coming back out. His fiancée, Hatice Cengiz, who was waiting outside for him, says she has not heard anything from him since he went into the consulate Oct. 2.” 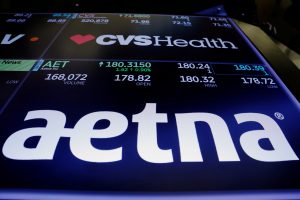 Logos of CVS and Aetna are displayed on a monitor above the floor of the New York Stock Exchange shortly after the opening bell in New York, U.S., December 5, 2017. (REUTERS/Lucas Jackson/File Photo)

Top line: “The Justice Department’s approval of the $69 billion merger between CVS Health and Aetna on Wednesday caps a wave of consolidation among giant health care players that could leave American consumers with less control over their medical care and prescription drugs. The approval marks the close of an era, during which powerful pharmacy benefit managers brokered drug prices among pharmaceutical companies, insurers and employers. But a combined CVS-Aetna may be even more formidable. As the last major free-standing pharmacy manager, CVS Health had revenues of about $185 billion last year, and provided prescription plans to roughly 94 million customers. Aetna, one of the nation’s largest insurers with about $60 billion in revenue last year, covers 22 million people in its health plans.”

Top line: “The Justice Department revealed Wednesday that an officer of China‘s intelligence and security agency has been arrested and brought to the U.S. to face charges of conspiring and attempting to steal sensitive trade secrets from a U.S. company that makes aircraft engines. Federal prosecutors said Yanjun Xu was arrested in Belgium in April after meeting with an engineer for the American firm. Though it was not identified in court papers, officials said the company is GE Aviation, based in Ohio.”

Top line: “Facebook said it has purged more than 800 U.S. pages and accounts for spamming users with politically-tinged garbage links and clickbait just weeks ahead of the U.S. midterm elections. The banned accounts and Facebook sites exhibited “coordinated inauthentic behavior” such as working together to make the pages appear more popular than they actually are. This, Facebook said, was designed to mislead users about who they are and what they’re doing. The social network said these accounts spread “sensational political content” designed to drive people to ad-laden websites outside Facebook. In the past, such spammers have often focused on celebrity gossip, weight loss remedies and fake iPhones. Pages Facebook removed fell on both sides on the political spectrum, Facebook said, although it declined to say if there were more on the right or the left.”

Top line: “Google is going to shut down the consumer version of Google+ over the next 10 months, the company writes in a blog post today. The decision follows the revelation of a previously undisclosed security flaw that exposed users’ profile data that was remedied in March 2018. Google says Google+ currently has “low usage and engagement” and that 90 percent of Google+ user sessions last less than five seconds. Still, the company plans to keep the service alive for enterprise customers who use it to facilitate conversation among co-workers. New features will be rolled out for that use case, the company says. Google is focusing on a “secure corporate social network,” which is odd considering this announcement comes alongside news that the company left profile details unprotected. In addition to sunsetting Google+, the company announced new privacy adjustments for other Google service.”

10. Here’s how much damage has been done to the stock market during a powerful rout – MarketWatch, Mark DeCambre

Top line: “Nearly 1,400 points and more than 5.2%: That is the degree to which the Dow Jones Industrial Average has gotten wrecked since Oct. 9, underscoring a punishing plunge for the broader stock market that appears to be the on verge of shedding its bullishness. So, how much damage has been done to the integrity of a stock market that just last week was testing the bounds of psychological heights at around 27,000? Quite a lot, it seems.”

~HeatherC is reading about Sleep Smarter by CNET