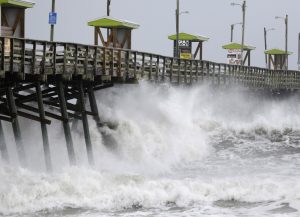 Hurricane Florence slammed into the Carolinas, swelling rivers and flooding communities, and requiring rescue operations for those residents who tried to weather the storm despite statewide evacuation orders.

Apple announced a new slate of updates on its iPhones, Apple Watch Series 4, and more during its “Gather Round” event on Sept. 12.

With midterm elections coming up in November and concerns about election security ever present, President Donald Trump ordered additional sanctions be prepared against any country, company or individual that/who interferes in U.S. elections. However, a bipartisan group of lawmakers argued the sanctions don’t go far enough.

In the business world, CBS News saw the departure of both its CEO Les Moonves, who was forced to depart after a series of allegations of sexual misconduct came to light, and Jeff Fager, the longtime executive producer of popular news show “60 Minutes,” for alleged sexual assault and tolerance of sexual harassment in the workplace.

On the world stage, the U.S. made two controversial decisions. The first came with National Security Adviser John Bolton’s threat of sanctions against and arrest of judges on the International Criminal Court if they agree to hear cases accusing U.S. servicemembers and private contractors of war crimes. That was soon followed by the U.S. announcing the closure of the Washington diplomatic offices of the Palestinian Liberation Organization as punishment for allegedly not negotiating with Israel over peace.

Pope Francis met with U.S. leaders of the Catholic Church to discuss the ongoing sex abuse crisis, which was also being mirrored in Germany, where allegations of widespread sexual abuse of 3,677 children over 70 years came to light.

The U.S. Open women’s finals in tennis made history on two counts. Naomi Osaka became the first Japanese player to win the Grand Slam, and the conflict that ensued between contender Serena Williams and umpire Carlos Ramos, who Williams accused of sexism in penalizing her for offenses that male players allegedly get away with. Meanwhile, on the men’s side, Novak Djokovic claimed victory over Juan Martín del Potro to win his 14th Grand Slam title.

Top line: “The rain turned sideways Thursday, rivers swelled and floodwaters began to fill streets, as massive Hurricane Florence trudged toward North Carolina. Florence is now a Category 1 storm with a 10-foot storm surge, according to the National Weather Service. The storm’s outer bands lashed towns on the barrier islands and on some of the Tar Heel State’s rivers, as the center of the cyclone moved to make a probable Friday landfall. In Morehead City, the rain and surf pounded the shoreline and took aim at the few boats still in the water. In New Bern, on the Neuse River, a CNN team had to keep shifting position in a park as the water kept rising until it was too dangerous to stay in the area. A weather station in Atlantic Beach recorded a total of 12.73 inches for a 24-hour period.” 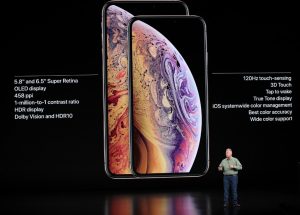 Top line: “Welcome to the 2018 Apple September launch event, where the company delivered the long-awaited (well, since this time last year) details on its new iPhones, the flagship iPhone XS Max, its little buddy the iPhone XS and a mainstream replacement for the iPhone x, the iPhone XR. Plus, the Apple Watch Series 4 goes all-in on health with a built-in ECG and more. As usual, the Apple Store went down in advance of the new product announcements. Now that it’s over, our takeaway is Apple’s testing your willingness to splurge, and testing our patience waiting for the things we didn’t get.”

Top line: “President Trump issued a new order Wednesday authorizing add­itional sanctions against countries or individuals for interfering in upcoming U.S. elections, but lawmakers of both parties immediately said the effort does not go far enough. The order would allow Trump to sanction foreigners who interfere in the midterm elections to be held in less than two months. It covers overt efforts to meddle in election infrastructure, such as vote counts, as well as “propaganda” and other attempts to influence voting from abroad, Director of National Intelligence Daniel Coats told reporters. The harshest sanctions outlined in the order would be at the president’s discretion.” 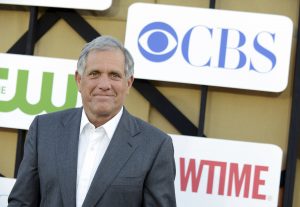 4. Threats and Deception: Why CBS’s Board Turned Against Leslie Moonves – The New York Times, James B. Stewart

Top line: “In the end, it was the evidence that Mr. Moonves had misled his board — even more than the allegations of abuse from multiple women — that doomed him. On Sunday, the CBS board announced his departure, not even paying lip service to his long career. And on Wednesday, CBS ousted Jeff Fager, the longtime head of “60 Minutes,” for sending a threatening text message to a CBS News reporter who was looking into allegations that Mr. Fager had fostered a culture of harassment at “60 Minutes.” This account of the CBS board’s six-week about-face — from vigorous support to unanimous, if belated, outrage — is based on interviews with directors and other people familiar with the board’s deliberations. They declined to be named because of confidentiality agreements, the possibility of litigation and an ongoing internal investigation.” 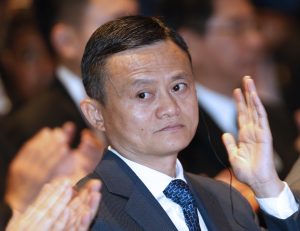 Founder and chairman of Alibaba Jack Ma arrives for signing the memorandums of understanding linked to the investment in Thailand, during a press conference Bangkok, Thailand, Thursday, April 19, 2018. (AP Photo/Sakchai Lalit)

Top line: “Jack Ma, the executive chairman of Chinese e-commerce giant Alibaba, has said he plans to step down in a year. The news, in a letter sent by Mr Ma to Alibaba customers and shareholders, follows conflicting reports over the weekend on the timing of his exit. Mr Ma, one of China’s richest men, will hand over the reins to Daniel Zhang, currently chief executive. Alibaba is one of the world’s most valuable companies – its shares nearly doubled in value last year.”

Top line: “CBS News on Wednesday fired “60 Minutes” top executive Jeff Fager, who has been under investigation following reports that he groped women at parties and tolerated an abusive workplace. The network news president, David Rhodes, said Fager’s firing was “not directly related” to the allegations against him, but came because he violated company policy. A CBS News reporter working on a story about Fager revealed that he had sent her a text message urging her to “be careful.” Fager is the third major figure at CBS to lose his job in the past year over misconduct allegations, following news anchor Charlie Rose last November and CBS Corp. CEO Leslie Moonves on Sunday.” 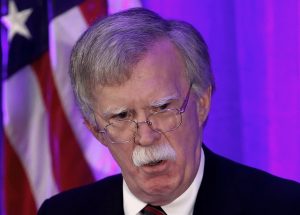 WASHINGTON, DC – SEPTEMBER 10: U.S. National Security Adviser John Bolton speaks at a Federalist Society luncheon at the Mayflower Hotel September 10, 2018 in Washington, DC. During his remarks, Bolton announced the United States will not cooperate with the International Criminal Court, and that the Trump administration intends to close the P.L.O. Mission in Washington, DC. (Photo by Win McNamee/Getty Images)

Top line: “The foreign offices of France and Germany on Tuesday reaffirmed their support for the International Criminal Court following national security adviser John Bolton’s remarks that the ICC could face severe repercussions, including sanctions, should it pursue an investigation into alleged U.S. war crimes in Afghanistan. Bolton blasted the court as “illegitimate” in a Monday speech, his first major one since arriving in the White House in April.”

Top line: “The Trump administration is closing the Washington offices of the Palestine Liberation Organization (PLO) to try to pressure the Palestinians to come to the negotiating table ahead of a US-sponsored Middle East peace plan. The decision to close the office is the latest step in a pressure campaign being waged by the Trump administration against Palestinian leadership to get them to comply with a planned Middle East peace proposal, which has yet to be unveiled. Even though the US does not recognize Palestine as a state, the PLO has maintained a diplomatic mission in Washington, DC, since the mid-1990s.”

Top line: “As Pope Francis sat down at the Vatican Thursday with a delegation of U.S. bishops and cardinals to discuss how to gain ground in the sexual abuse crisis engulfing the Catholic Church, fresh scandals emerged on both sides of the Atlantic. In Germany, a first-of-its kind study leaked to German news outlets found that over the past seven decades, at least 3,677 children have been sexually abused by clergy members there. Last month, an explosive grand jury report covering a similar time period in Pennsylvania revealed that 300 “predator priests” had abused more than 1,000 victims with the help of a systematic cover-up by church leaders. But the grand jury added a caveat: “We believe that the real number … is in the thousands.” Seeking a way forward, American bishops and cardinals laid the crisis bare before the pope at the Vatican on Thursday.” 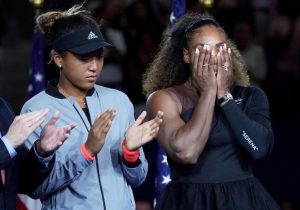 Top line: “A bizarre, ugly spectacle in the women’s final. A star’s first Slam. A historic number 14. The debut of the serve clock. A controversial pep talk. The 2018 U.S. Open was one for the books. Here are 50 parting thoughts from Flushing Meadows.”

~HeatherC is reading about The Most Delish Fall Foods by Delish