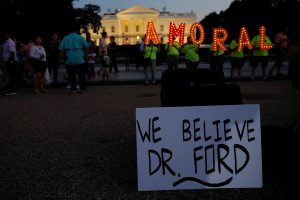 #KremlinAnnex protesters place a sign referring to Christine Blasey Ford, the woman who accused Supreme Court nominee Judge Brett Kavanaugh of a 1982 sexual assault, and spell out the word “AMORAL” on the 66th consecutive day of their demonstration outside the White House in Washington, U.S., September 19, 2018. (REUTERS/Brian Snyder)

The controversy surrounding Supreme Court nominee Brett Kavanaugh and Dr. Christine Blasey Ford, Kavanaugh’s former acquaintance who has accused him of sexually assaulting her when they were teenagers, escalated this week. Congressional Republicans are reportedly offering to hold the hearing Wednesday next week after initially pushing for a Monday hearing at which both parties would testify. Democrats and Dr. Ford’s lawyers called first for an FBI investigation and then for conditions to be met before she would agree. Negotiations continue.

Earlier this week, President Trump moved to declassify documents from the FBI’s Russia investigation, but backtracked his order under pressure from the Justice Department.

Trade tensions with China continued to mount, with the U.S. announcing additional planned tariffs on Chinese goods, China implementing more retaliatory tariffs, and the U.S. applying fresh sanctions on China for the purchase of Russian weapons, to which China responded with a threat.

Over on the Korean peninsula, the leaders of North Korea and South Korea met for the third time, agreeing on a goal of “complete denuclearization” by 2021, but with the expectation that the United States would also take some similar action. Secretary of State Mike Pompeo expressed interest in the U.S. reopening negotiations on the matter.

A week after Hurricane Florence flooded communities across the Carolinas, a fresh round of evacuations have been ordered as river levels continue to rise.

Tesla founder Elon Musk had a busy week, between the company he founded facing a U.S. criminal investigation over tweets he made about taking the company private, and the announcement that SpaceX, another company for which he serves as CEO, has chosen its first passenger for a private flight into outer space: Japanese billionaire and rock musician Yusaku Maezawa.

In sports news, Russia was reinstated to a competitive status by the World Anti-Doping Agency after a three year ban for a variety of offenses for engaging in chronic doping of athletes and cover-up efforts.

In the entertainment world, the 2018 Emmy Awards did not provide much distraction from the serious events of the day, with a mix of commentary, musical numbers, and awards that met with mixed reviews.

Top line: “Christine Blasey Ford opened the possibility she would testify before Congress about her accusation of sexual assault against Supreme Court nominee Brett Kavanaugh. An email her lawyers sent to the Senate Judiciary Committee said Ford “would be prepared to testify next week” if the senators offer her “terms that are fair and which ensure her safety.” The message came a day ahead of a 10 a.m. Friday deadline set by Senate Judiciary Chairman Chuck Grassley of Iowa for Ford to decide whether she would appear before a hearing he set for Monday.”

Top line: “President Donald Trump on Friday abandoned plans to quickly declassify and release sensitive documents connected to the FBI’s Russia investigation, citing a “perceived negative impact” on the probe and concerns raised by “key allies” about dumping the materials. Trump instead announced that he would defer to a Justice Department watchdog — Inspector General Michael Horowitz, who he once derided as an “Obama guy” — to finish a review of whether anti-Trump bias affected the FBI’s handling of its 2016 Russia probe.” 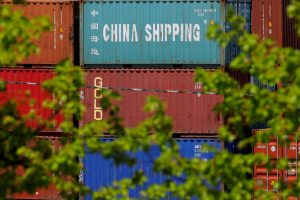 Top line: “Withdraw the sanctions or “bear the consequences.” That was the unnervingly vague ultimatum that China leveled at the Trump administration Friday, after Beijing was punished for buying Russian arms. Since December, Russia has delivered 10 Sukhoi Su-35 combat aircraft to China as well as equipment related to Moscow’s feared S-400, a state-of-the-art missile defense system. From a U.S. perspective, the problem was that Beijing bought these components from Russia’s state arms export agency, which was already on a U.S. blacklist.” 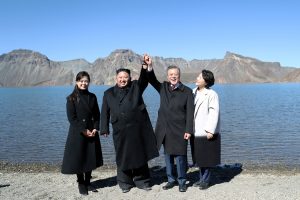 Top line: “A new round of evacuations was ordered in South Carolina as the trillions of gallons of water dumped by Hurricane Florence meanders to the sea, raising river levels and threatening more destruction. With the crisis slowly moving to South Carolina, emergency managers on Friday ordered about 500 people to flee homes along the Lynches River. The National Weather Service said the river could reach record flood levels late Saturday or early Sunday, and shelters are open. Officials downstream sounded dire alarms, pointing out the property destruction and environmental disasters left in Florence’s wake.”

Top line: “Tesla Inc. is under investigation by the Justice Department over public statements made by the company and Chief Executive Officer Elon Musk, according to two people familiar with the matter. The criminal probe is running alongside a previously reported civil inquiry by securities regulators. Federal prosecutors opened a fraud investigation after Musk tweeted last month that he was contemplating taking Tesla private and had “funding secured” for the deal, said the people, who were granted anonymity to discuss a confidential criminal probe. The tweet initially sent the company’s shares higher. Tesla confirmed it has been contacted by the Justice Department.” 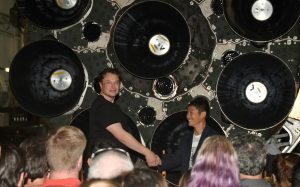 Top line: “SpaceX CEO Elon Musk says the first passenger on a private space flight around the moon will be a Japanese billionaire who also happens to be a rock musician and art collector. Yusaku Maezawa is the founder of Zozotown, Japan’s biggest fashion retail website. He’s Japan’s 18th-richest person, according to Forbes, which estimates his net worth at $2.9 billion. Maezawa, 42, is paying an undisclosed amount of money to be the first commercial passenger to fly around the moon on SpaceX’s Big Falcon Rocket (BFR), the company announced via webcast on Monday evening. The mission is scheduled to launch in 2023, and Maezawa is also paying for the fares of up to eight other passengers — all artists, who the billionaire says will create works of art reflecting their time in space.”

Top line: “Russia has been reinstated by the World Anti-Doping Agency, a controversial decision given the magnitude of the country’s doping offenses. WADA’s executive committee voted to reinstate Russia’s Anti-Doping Agency (RUSADA) at a meeting Thursday in the Seychelles. The decision was expected after WADA’s compliance review committee made its recommendation for reinstatement last week. WADA president Craig Reedie announced on Twitter the “great majority” of the executive committee decided to reinstate RUSADA as compliant.”

9. U.S. slashes the number of refugees it will allow into the country – The Washington Post, Carol Morello

Top line: “The United States will admit no more than 30,000 refugees in the coming fiscal year, Secretary of State Mike Pompeo said Monday, the lowest number in decades and a steep cut from the 45,000 allowed in this year. The new number is a small fraction of one percentage point of the almost 69 million displaced people in the world today. But Pompeo said the United States remains the most generous nation when other U.S. aid to refugees is taken into account, including funds to shelter and feed refugees in camps closer to their home countries.” 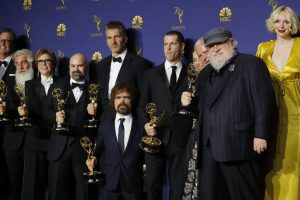 Top line: “From the world’s most awkward award-show hosts to the marriage proposal heard ’round the world — the highlights, low points and headscratching moments of the 2018 Emmy Awards.”

~HeatherC is reading about The Reclaim Movement by Amie Green