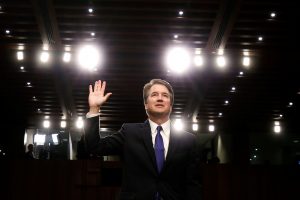 U.S. Supreme Court nominee Judge Brett Kavanaugh faced a four-day confirmation hearing during which Congress alternately protested not having access to all of his legal papers and questioned him about his stances on everything, from abortion and LGBT rights to the limits of presidential power.

The Trump administration entered crisis mode this week after the back-to-back release of statements from senior White House and government officials painted an unflattering and worrying portrait of the Donald J. Trump presidency. First came the release of excerpts and quotes from “Fear,” a book by veteran journalist Bob Woodward about the Trump presidency. That was followed by the publication of a New York Times op-ed by an anonymous “senior administration official” who claimed to be part of a “quiet resistance” within the administration. This led to rampant speculation about the author’s identity, outrage from the president, and denials from staff.

Elsewhere in Washington, the Justice Department announced charges against a North Korean hacker allegedly responsible for not only the 2014 hack of Sony Pictures Entertainment that revealed personal information about their employees, but also the 2016 theft of $81 million from a bank in Bangladesh, and the 2017 release of the devastating WannaCry ransomware strain.

Former U.S. Senator Jon Kyl, 76, also came out of retirement to serve as temporary replacement for the late Senator John McCain as one of Arizona’s congressional representatives.

Actor Burt Reynolds died at the age of 82, leaving behind a decades-long legacy of action heroes with lots of swagger and “good ol’ boy” heart.

In the tech world, Amazon became the second publicly-traded U.S. company to reach a $1 billion market cap, before dropping below that milestone again, and Facebook and Twitter executives — Google was invited, but absent — testified before Congress about what actions are being taken to limit foreign influence on the social media platforms, and what role government regulation might play in the future.

Twitter is also looking toward dangers on the domestic front, deciding to ban media provocateur Alex Jones and his company, Infowars, from using their site as a platform for his conspiracy theories, hoaxes, and attacks on individuals and groups large and small.

A ban reversal took place on the global stage, with India’s supreme court ruling unanimously that a 160-year-old colonial-era law against homosexuality is unconstitutional.

Top line: “If confirmed — and it’s looking like he will be — President Trump’s Supreme Court pick would replace a frequent swing vote on the bench, retired Justice Anthony Kennedy, who often sided with his liberal colleagues on issues such as abortion, affirmative action and LGBT rights. It’s a lifetime appointment.”

Top line: “One after another, President Donald Trump’s top lieutenants stepped forward Thursday to declare, “Not me.” They lined up to deny writing an incendiary New York Times opinion piece that was purportedly submitted by a member of an administration “resistance” movement straining to thwart Trump’s most dangerous impulses. By email, by tweet and on camera, the denials paraded in from Cabinet-level officials — and even Vice President Mike Pence — apparently crafted for an audience of one, seated in the Oval Office. Senior officials in key national security and economic policy roles charged the article’s writer with cowardice, disloyalty and acting against America’s interests in harsh terms that mimicked the president’s own words.” 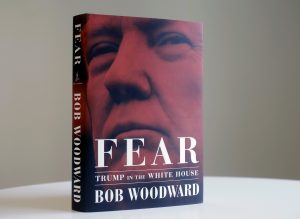 A copy of Bob Woodward’s “Fear” is photographed Wednesday, Sept. 5, 2018, in New York. It’s not clear whether President Donald Trump has much to fear from “Fear” itself. But the book of that name has set off a yes-no war between author Bob Woodward and the president, using all the assets they can muster. (AP Photo/Mark Lennihan)

Top line: “A new book by Bob Woodward, the longtime Washington Post reporter, portrays a White House with relentless infighting and a work culture so toxic and volatile that many of President Trump’s top advisers and cabinet members became accustomed to working around their boss, whom they described as unstable and uninformed.“Fear: Trump in the White House,” which is set for a public release next Tuesday and already sits atop Amazon’s best-seller list, is one in a series of insider accounts published this year that have drawn the ire of the West Wing.”

Top line: “Actor Burt Reynolds, who played good ol’ boys and rugged action heroes in an acting career that spanned seven decades, has died. Reynolds died Thursday morning at a Florida hospital following a heart attack. He was 82. Reynolds came to stardom in Deliverance and Smokey and the Bandit in the 1970s and was still making movies more than 40 years later. In 1977’s Smokey and the Bandit, Jackie Gleason was Smokey the sheriff, Burt Reynolds was Bandit, and the plot hinged on whether Bandit and a truck-driving pal could blow through Smokey’s roadblocks and make the run in 28 hours.”

Top line: “On the Monday morning before the Thanksgiving holiday in 2014, employees at the Culver City headquarters of Sony Pictures Entertainment found their computer screens taken over by an image of a red skeleton, and a message: “We’ve already warned you, and this is just a beginning.” It was the start of a months-long nightmare in which hackers, calling themselves “Guardians of Peace,” made public the personal emails, salaries, and even medical records of Sony’s workers. For years, the cybersecurity community has pinned the attack on North Korea. Thursday, the Justice Department made it official, issuing a sweeping complaint against a single Hermit Kingdom hacker for not just the Sony breach, but for 2017’s devastating WannaCry ransomware strain, a brazen heist of $81 million from Bangladesh in 2016, and more.”

Top line: “Skeptical lawmakers questioned leaders of the nation’s largest social media companies Wednesday over their plan to keep Russia and other foreign actors from using their platforms to influence U.S. elections. Facebook COO Sheryl Sandberg and Twitter CEO Jack Dorsey fielded questions about foreign influence for hours, but it wasn’t clear their conciliatory message or detailed accounts of the steps they have taken would satisfy lawmakers. “Without question, positive things are happening,” said Sen. Richard Burr, R-N.C., chairman of the Senate Intelligence Committee. “But clearly this problem’s not going away; I’m not even sure it’s trending in the right direction.”” 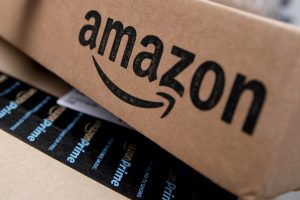 Top line: “Amazon stock briefly hit a $1 trillion market cap Tuesday before falling off and leaving Apple as the only publicly traded U.S. company above the benchmark. Analysts cite the company’s ever-diversifying portfolio as a value driver. Last year, Amazon launched into the grocery industry with its purchase of Whole Foods Markets. It is rounding out its hardware and logistics segments with last-mile deliveries, and it’s pushing forward in advertising to challenge Facebook and Google.”

Top line: “The late U.S. Senator John McCain’s seat was filled on Wednesday when Jon Kyl, a former senator, took the oath of office in time to help Republicans in their push to confirm Brett Kavanaugh to the U.S. Supreme Court. Kyl, 76, was sworn in as the new senator from the southwestern state of Arizona in a brief ceremony on the Senate floor. Vice President Mike Pence, who also serves as president of the Senate, administered the oath. In replacing McCain, a maverick who at times went against his party, Kyl is expected to bring a somewhat more conservative political viewpoint to the Senate, which is controlled by Republicans.”

Top line: “Celebrations have erupted in India after the supreme court unanimously ruled to decriminalise homosexual sex in a landmark judgment for gay rights. A five-judge bench at the country’s highest court ruled that a 160-year-old law banning sex “against the order of nature” amounted to discrimination on the basis of sexual orientation and was unconstitutional. The judgment, after 24 years of legal challenges, triggered elation among LBGT Indians and their allies across the country and plans for all-night parties in nightclubs in major cities.”

Top line: “Twitter says it has permanently suspended the accounts of Alex Jones and his Infowars website. It made the move after a number of tweets that violated Twitter’s abusive behaviour policy, the company said. A number of tech giants, including YouTube and Facebook, deleted the right-wing conspiracy theorist’s content last month, citing hate speech. The radio host is best known for spreading unsubstantiated allegations about tragic events, including 9/11. He is currently being sued for defamation by the parents of two children killed in the 2012 Sandy Hook Elementary School shooting, which he has repeatedly claimed was a “giant hoax”. Twenty children under the age of seven and six adults died in the attack.”

~HeatherC is reading about Behind The Numbers