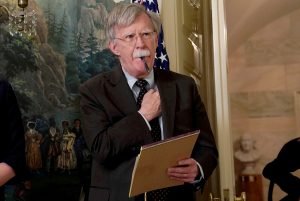 National security adviser John Bolton was fired by President Donald Trump over disagreements on foreign policy, a few days after Trump announced via tweet that he had cancelled a secret meeting with Taliban leaders at Camp David.

In other foreign policy news, Trump issued another delay to U.S. tariffs on Chinese goods, this time for two weeks. In response, Chinese officials said they would remove soybeans and pork from their list of U.S. products to tax. And the Trump administration announced they would not offer temporary protected status to Bahamian residents displaced by Hurricane Dorian.

On the heels of more health concerns about vaping, the Food and Drug Administration warned e-cigarette companies to stop marketing them as healthier alternatives to cigarettes and the Trump administration said it was considering a ban on vaping products. The FDA also announced that low levels of carcinogens were found in common heartburn medication.

In business news, Apple made a series of major announcements about new and updated products, Google faces antitrust lawsuits from 50 attorneys general, and Oxycontin maker Purdue Pharma moved closer to a multi-billion dollar settlement over its opioid sales.

Top line: “President Donald Trump ousted national security adviser John Bolton on Tuesday, saying he and the hawkish aide had “disagreed strongly” on many issues and suggesting that Bolton had collided with other Trump advisers, too. The decision came after widespread reports that Bolton tried to stop Trump from inviting leaders of the Afghan Taliban to Camp David for peace talks. Trump ultimately scrapped the idea, but multiple people familiar with the issue said the news reports about Bolton’s dissent — believed to have been planted by Bolton aides — infuriated Trump. Bolton’s ouster leaves yet another vacancy in the upper echelons of the Trump administration, where many roles are either unfilled or filled on an acting basis, including several that deal with national security issues. It also means Trump could hear fewer dissenting voices on major moves he wants to make on the national security front, such as talking to the leaders of Iran.” 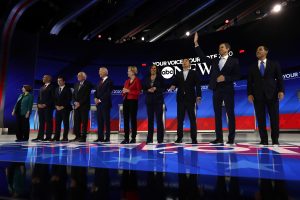 Top line: “Thursday’s Democratic primary debate was the first time all the leading candidates were onstage together. The most illuminating exchanges were not between Joseph R. Biden Jr. and Elizabeth Warren, who met onstage for the first time, but from other pairings. Here are six highlights from the debate.”

Top line: “China said on Friday it was canceling planned tariff increases on American soybeans and pork, the latest sign of a diplomatic thaw in the U.S.-China trade war that could lead to an interim agreement this fall. Chinese importers in recent days resumed purchases of American soybeans for the first time since this spring, when Beijing called a halt in retaliation for tariffs President Trump had imposed on numerous Chinese products. The soybean move capped three days of unexpected improvement in a U.S.-China relationship that had run aground. On Wednesday, China eased tariffs on 16 U.S. products, including alfalfa and lubricant oils. Trump responded by delaying a planned Oct. 1 U.S. tariff increase on $250 billion of Chinese goods by two weeks, to avoid conflicting with Beijing’s plans to celebrate the 70th anniversary of the Chinese revolution.”

Top line: “The Trump administration proposed on Tuesday reducing federal protections for U.S. waterways, an action sought by ranching and mining interests but one that will likely be held up in the courts amid lawsuits brought by environmentalists. The Environmental Protection Agency proposal would narrow the extent of protections in the Waters of the United States (WOTUS) rule that President Barack Obama’s administration expanded in 2015 to cover a wide range of water bodies. President Donald Trump, who has accused Obama of over-reaching on regulations, made rolling back WOTUS one of his top policy priorities. Tuesday’s proposal was his administration’s latest effort to rescind environmental rules to boost the energy and agriculture industries.” 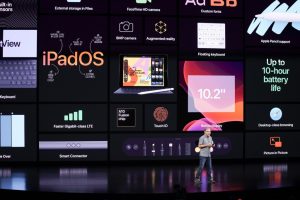 Greg Joswiak, Apple’s vice president of Product Marketing, discussing the new iPad: the 9.7″ model is being bumped up to 10.2″, it’ll have a Retina display, a smart connector on its edge to connect it with a full size keyboard accessory, and work with the first-gen Apple Pencil. (AP Photo/Tony Avelar)

Top line: “Apple’s big hardware event for 2019 has wrapped, and, as expected, it brought a bounty of exciting announcements. Of course, the iPhone 11 happened — and, yes, a version is really called the iPhone 11 Pro Max — but there were a bunch of other good moments that are worth talking about. If you weren’t able to follow along with this year’s Apple fall hardware event or if you just want to relive it again, you can read the live blog to see the moments unfold as they happened or check out this brief recap on the biggest announcements.”

Magazine to follow: Everything Announced at Apple’s September Event

Top line: “Fifty attorneys general are joining an investigation into Google over possible antitrust violations, Texas Attorney General Ken Paxton, the initiative’s leader, announced Monday. The news confirms reports last week about the bipartisan investigation into Google’s practices. The probe includes attorneys general from 48 states, the District of Columbia and Puerto Rico. California and Alabama are not involved in the probe, Paxton said at a press conference. Other attorneys general at the media conference emphasized Google’s dominance in the ad market and use of consumer data.”

Top line: “Purdue Pharma, the maker of the opioid drug OxyContin, has reached a tentative deal worth billions of dollars that would resolve thousands of lawsuits brought by municipal and state governments who sued the company for allegedly helping to fuel the opioid crisis. The pending settlement likely means Purdue will avoid going to trial in the sprawling and complicated case involving some 2,300 local governments across 23 states. Lawyer Paul Farrell, one of the lead attorneys representing more than 2,000 local governments that have filed suit against Purdue, said the Sackler family, which owns the privately-held drug company, will pay roughly $3 billion dollars in cash over several years and relinquish control of the company. Details of the deal ⁠— like how the money will be divvied up — are still being worked out. The settlement, if enacted, would mean Purdue will file for bankruptcy and divest from pharmaceutical holdings worldwide.” 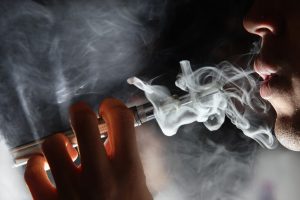 In this photo illustration, a man smokes an E-Cigarette at the V-Revolution E-Cigarette shop in Covent Garden on August 27, 2014 in London, England. The Department of Health have ruled out the outlawing of ‘e-cigs’ in enclosed spaces in England, despite calls by WHO, The World Health Organisation to do so. WHO have recommended a ban on indoor smoking of e-cigs as part of tougher regulation of products dangerous to children. (Photo by Dan Kitwood/Getty Images)

Top line: “Efforts to ban flavored e-cigarettes and reduce their appeal to youngsters have sputtered under industry pressure in over a half-dozen states this year even as one state, Michigan, moves ahead with its own restrictions and President Donald Trump promises federal ones. In many cases, the fight by the industry and its lobbyists has focused on leaving the most popular flavors — mint and its close cousin, menthol — alone. But public health experts say that all flavors should be banned, and that menthol can still hook kids on vaping. The proposal Trump outlined on Wednesday, which would supersede any state inaction, includes a ban on mint and menthol, and an industry giant quickly indicated it would capitulate.”

Top line: “The US Food and Drug Administration said on Friday that it has learned that some ranitidine — acid-reducing and heartburn medicines, including those known by the brand name Zantac — contain low levels of an impurity that could cause cancer. The nitrosamine impurity known as N-nitrosodimethylamine or NDMA has been classified as a probable human carcinogen based on lab tests, and this isn’t the first time that it has been detected in a common medication. Since last year, the FDA has been investigating NDMA and other impurities in blood pressure and heart failure medicines known as angiotensin receptor blockers or ARBs. Numerous recalls have been launched as the FDA found “unacceptable levels” of nitrosamines in several of those common drugs containing valsartan.”

Top line: “The U.S. will not grant temporary protected status to people from the Bahamas displaced by Hurricane Dorian, an administration official told NBC News. The status would allow Bahamians to work and live in the U.S. until it is deemed safe to return home. The same status is currently granted to over 300,000 people living in the U.S. from 10 countries, including the victims of Haiti’s 2010 earthquake. Bahamians can still come to the U.S. temporarily, if they have the right travel documents, but will not be granted work permits.”