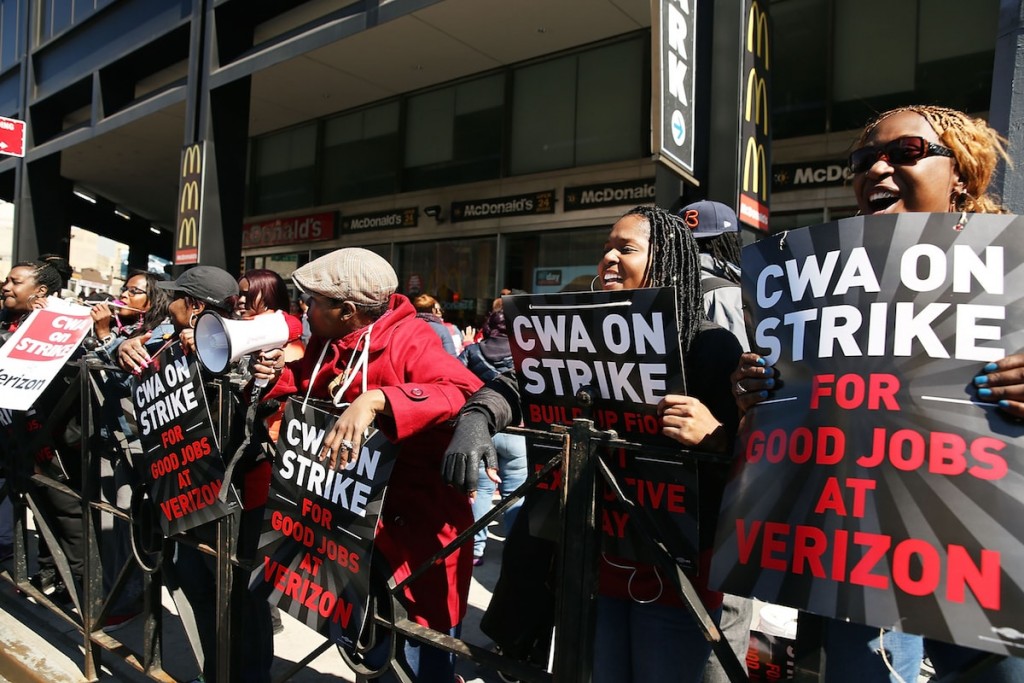 Hundreds of Verizon workers strike outside of the telecommunications company’s Brooklyn offices on April 13, 2016 in New York City. (Photo by Spencer Platt/Getty Images)

A tension-filled Democratic presidential debate capped off this week that included a record-breaking game for the Golden State Warriors, the end of Kobe Bryant‘s NBA playing career, a large Verizon workers strike and rising political tensions in Brazil, among other stories. Read some of the biggest news of the week below, as it appeared in The Daily Edition.

Top line: “A question of judgment…Clinton further than ever from a general election pivot…’Think big’ or get things done?…Clinton won’t give on transparency…One place where Sanders and Clinton agreed: Regrets…But no apology from Sanders on guns.”

Top line: “Stephen Curry and the Golden State Warriors took their last shot at Michael Jordan and history and they swished it — for 73. Down to their final chance at the record, the Warriors became the first 73-win team Wednesday night by beating the Memphis Grizzlies 125-104, breaking what many considered an unmatchable mark set 20 years ago by Jordan’s Chicago Bulls — oh, and Golden State coach Steve Kerr, too.”

Top line: “The final points of his illustrious career were two game-sealing free throws to give himself 60 points (on a career-high 50 shots) and the Lakers a 101-96 victory over the Utah Jazz. It was all a fever dream, 48 minutes of unprecedented glory in front of a hyperventilating Staples Center crowd that didn’t know what to do with itself.”

Top line: “CNN has obtained a video of some of the ‘Chibok Girls’ sent to negotiators by their captors as a ‘proof of life.’ The video had been seen by negotiators and some members of the government. But no one had shown the parents. Until now.”

Top line: “36,000 Verizon workers have walked off the job Wednesday after failing to reach a new labor agreement. This is the largest strike in the United States since Verizon workers last walked off the job in 2011, according to the U.S. Bureau of Labor Statistics. That strike involved 45,000 workers…The union’s list of complaints is a long one: Verizon has outsourced 5,000 jobs to workers in Mexico, the Philippines and the Dominican Republic. Verizon is hiring more low-wage, non-union contractors, the union says.”

‘If no candidate has a majority on the first ballot, I believe you should only choose a person who actually participated in the primary. Count me out.'”

Top line: “Lawmakers backing impeachment allege Rousseff’s administration violated fiscal rules, using sleight of hand accounting in a bid to shore up public support. However, many of those pushing for impeachment face grave accusations of corruption themselves. Rousseff’s defenders insist she did nothing illegal, and say similar accounting techniques were used by previous presidents.”

Top line: “Belgium has charged two more men with terrorist offences over alleged links to the rental of a property thought to have been used as a safe house before the Brussels attacks, federal prosecutors said on Tuesday…That brought to six the total of suspects caught and charged since late last week as a result of investigations since the March 22 bombings in Brussels that killed 32 people.”

Top line: “A Florida prosecutor has decided not to prosecute Donald Trump’s campaign manager for battery after a March run-in with former Breitbart reporter Michelle Fields, sources with knowledge of the situation told POLITICO.”