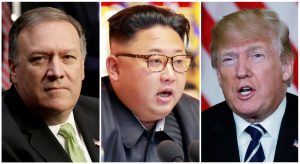 North Korea reportedly told South Korea that they are committed to unconditional “complete denuclearization” of the Korean Peninsula. The news followed the revelation that secretary of state nominee and current CIA Director Mike Pompeo visited North Korean President Kim Jong Un over Easter to prepare for a possible meeting with President Donald Trump.

Cuba elected a new president this week and it’s their first not named Castro in nearly 60 years. Outgoing president Raúl Castro passed the torch to Miguel Díaz-Canel, a Communist Party veteran who served as first vice-president for five years.

Former first lady Barbara Bush died at the age of 92, setting off a wave of tributes from around the world. Known for her warm personality and subtle wit, she leaves behind a legacy of advocacy for literacy and health education.

James Comey, fired last year as FBI director, embarked on a book tour for his new memoir, “A Higher Loyalty,” which offers his impressions of President Trump and the Russia investigation.

President Trump’s personal lawyer, Michael Cohen, dropped his libel lawsuits against Buzzfeed and Fusion GPS for publishing information from a dossier alleging ties between Trump and Russia. Cohen claimed he was only doing so to focus on his own legal troubles.

One woman died after being partially sucked out the window of a Southwest Airlines plane from New York to Dallas when the engine exploded, resulting in an emergency landing and a Federal Aviation Administration investigation into all similar engines.

In other news, two-time Olympian Desiree Linden became the first U.S. woman to win the Boston Marathon in over 30 years and the Pulitzer Prizes were announced. Rapper Kendrick Lamar was among the winners, becoming the first non-classical/non-jazz artist to win for music.

Top line: “North Korea has expressed its commitment to “complete denuclearization” of the Korean Peninsula and is not seeking conditions, South Korean President Moon Jae-in said on Thursday, as the United States vowed to maintain “maximum pressure” on Pyongyang.”

Top line: “Miguel Díaz-Canel has been sworn in as Cuba’s new president, replacing Raúl Castro who took over from his ailing brother Fidel in 2006. It is the first time since the revolution in 1959 that a Castro is not at the helm of the government. Mr Díaz-Canel had been serving as first vice-president for the past five years. Even though Mr Díaz-Canel was born after the revolution, he is a staunch ally of Raúl Castro and is not expected to make any radical changes. There was “no room in Cuba for those who strive for the restoration of capitalism” he said in his inaugural address.” 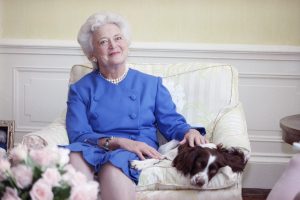 Top line: “Barbara Bush, the widely admired wife of one president and the fiercely loyal mother of another, died Tuesday evening at her home in Houston. She was 92. Jim McGrath, a family spokesman, announced the death in a statement posted to Twitter. On Sunday, the office of her husband, former President George Bush, issued a statement saying that after consulting her family and her doctors, Mrs. Bush had “decided not to seek additional medical treatment and will instead focus on comfort care.” The Bushes had celebrated their 73rd wedding anniversary in January, making them the longest-married couple in presidential history.” 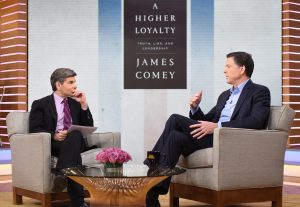 Top line: “On Sunday night, James Comey told his side of the story. The former — and fired — FBI director sat down with ABC’s George Stephanopoulos Sunday night to talk about his deep concerns about President Donald Trump and to recount a number of now-famous/infamous episodes between the two men. (Comey has written a book about his experiences titled “A Higher Loyalty.”)”

Top line: “The Justice Department inspector general referred his finding that former FBI deputy director Andrew McCabe repeatedly misled investigators to Washington’s top federal prosecutor, who will determine whether McCabe should be charged with a crime, according to people familiar with the matter.”

Top line: “Embattled attorney Michael Cohen has dropped a pair of much-touted libel suits against BuzzFeed and the private investigation firm Fusion GPS over publication of the so-called dossier detailing alleged ties between President Donald Trump and Russia. Cohen abandoned the suits late Wednesday as he continues to fight to recover documents and electronic files seized from his home, office and hotel room last week by federal authorities as part of what appears to be a broad criminal investigation into his conduct.”

Top line: “The U.S. Federal Aviation Administration said it will order inspections of at least 220 aircraft engines as investigators are focusing on a broken fan blade in an engine that exploded Tuesday on a Southwest Airlines flight, killing a passenger. The regulator said late on Wednesday it plans to finalize the air-worthiness directive within the next two weeks.” 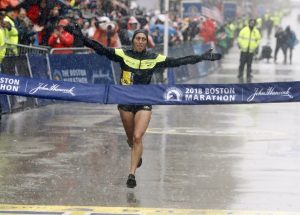 Desiree Linden of Washington, Mich. wins the women’s division of the Boston Marathon. She is the first American woman to win the race since 1985. (Winslow Townson-USA TODAY Sports)

Top line: “A two-time Olympian and the 2011 Boston Marathon runner-up, Linden decided to stick around, outlasting the weather and the rest of the field to win the race’s 122nd edition on Monday in 2 hours, 39 minutes, 54 seconds. That was more than four minutes better than second-place finisher Sarah Sellers but the slowest time for a women’s winner in Boston since 1978.”

9. Prince’s death: Superstar didn’t know he was taking fentanyl; no one charged with a crime – USA Today, Maria Puente

Top line: “Just short of two years after Prince’s death, Metz announced that no one will be charged with a crime in connection with his death because there’s no evidence showing how he got fake Vicodin laced with fentanyl, a synthetic opioid 50 times stronger than heroin, and no evidence he knew that’s what it was.”

Top line: “Out of more than 2,400 submissions, distinguished projects in just 21 categories earned gold Monday as winners of the 2018 Pulitzer Prizes. “They include books, music and drama that inform us, that challenge our conventional notions of creative expression and that push us to consider and embrace new ideas and perspectives,” Pulitzer administrator Dana Canedy said during the announcement at Columbia University in New York City.”