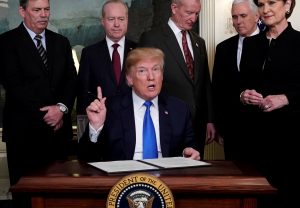 The tariff dispute between the United States and China escalated this week. Both countries announced $50 billion in tariffs that included electronics, medical devices, soybeans and pork. President Trump also threatened an additional $100 billion in tariffs if China’s government didn’t comply with U.S. demands.

A disgruntled YouTube user opened fire at the company’s San Bruno, California headquarters, injuring three, before turning the gun on herself.

The Russia investigation netted its first prison sentence—30 days and a $20,000 fine—in the case of lawyer Alexander van der Zwaan, who pleaded guilty to lying to Special Counsel Robert Mueller’s team about his work with ex-Trump campaign manager Paul Manafort.

Public school teachers in Oklahoma and Kentucky marched on their state capitals in coordinated walkouts to protest pay and school funding. Their rallies followed in the footsteps of an earlier walkout by teachers in West Virginia.

Around the country, vigils, speeches and calls to action marked the 50th anniversary of Martin Luther King Jr’s untimely death.

Top line: “China’s government vowed Friday to “counterattack with great strength” if President Donald Trump goes ahead with plans to raise U.S. tariffs on an additional $100 billion worth of Chinese goods and said negotiations were impossible under current conditions. Trump’s surprise move Thursday to instruct the U.S. trade representative to consider additional tariffs came a day after Beijing said it would tax $50 billion in American products, including soybeans and small aircraft, in response to a U.S. move this week to impose tariffs on $50 billion in Chinese imports.” 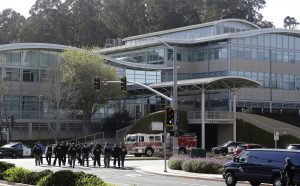 Top line: “Family members of the woman who opened fire at YouTube’s headquarters this week were stunned by news of the attack in San Bruno, California, but said they warned police ahead of the shooting. Nasim Najafi Aghdam was upset with some of YouTube’s policies, according to San Bruno police Chief Ed Barberini, motivating her to shoot and wound three people before killing herself. Aghdam used YouTube to post videos about her views on animal rights and her vegan lifestyle, among other topics. But police in Mountain View, California, where Aghdam was found early Tuesday hours before the attack dispute the family’s characterization of phone calls with authorities.” 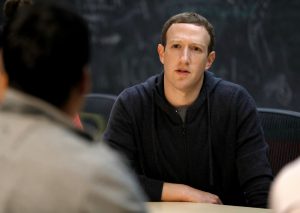 In this Nov. 9, 2017, file photo, Facebook CEO Mark Zuckerberg meets with a group of entrepreneurs and innovators during a round-table discussion in St. Louis. As Zuckerberg prepares to testify before Congress over Facebook’s privacy fiasco, public-relations experts who have prepped CEOs before have plenty of advice on handling the hot seat. (AP Photo/Jeff Roberson, File)

Top line: “Facebook CEO Mark Zuckerberg will testify on Capitol Hill on April 10 and 11 before the a joint hearing of the Senate Judiciary and Commerce Committees, followed by one before the House Energy and Commerce Committee, to answer questions about how the company protects its users’ data. Multiple congressional committees have asked Zuckerberg to testify in light of reporting about Cambridge Analytica‘s use of Facebook data to target American voters in the 2016 election.”

Top line: “Frustrated educators were asking politicians to do the math on Monday as thousands of teachers swarmed the Oklahoma and Kentucky state capitals to demand an increase in their wages and in school funding. Every public school in Kentucky and many schools in Oklahoma closed on Monday due to the large number of teachers protesting. The simultaneous protests across the country marked a breaking point for many teachers, who say they’re tired of raising money and paying out of pocket for their underfunded classrooms.”

Top line: “A group that includes 17 states, seven cities and the U.S. Conference of Mayors is suing the Commerce Department and the Census Bureau over efforts to include a question about U.S. citizenship on the upcoming 2020 census. The lawsuit, led by New York Attorney General Eric Schneiderman, argues that adding a citizenship question “will fatally undermine the accuracy of the population count and cause tremendous harms” by discouraging census participation among immigrant communities, many of which are concentrated in urban areas whose congressional representation and federal funding might then suffer.”

8. Spotify’s stock opened with a bang, but closed on a down note – Marketwatch, Mark DeCambre

Top line: “Shares of music-streaming service Spotify Technology SA debuted just after noon on Tuesday with much fanfare on the New York Stock Exchange, but pulled back sharply into the close. The Sweden-based company SPOT, +2.06%  used an unorthodox “direct listing” to go public, which means it let existing shares float publicly on an exchange, without underwriting banks to smooth the process. Spotify said it didn’t want “the pomp or the circumstance” of a traditional initial public offering or the lockup period that follows, and wasn’t in dire need of new funds, as is often the case with an initial public offering.” 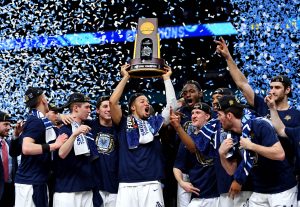 Top line: “The college basketball season is over. Villanova defeated Michigan on Monday night, 79-62, en route to its second national championship in three seasons. The Wildcats overcame a 7-point first half deficit to bury the Wolverines, building a lead that ballooned to as many as 22 in the closing minutes to comfortably cut down the nets in the Alamo City. Player of the Year frontrunner Jalen Brunson finished with only 9 points, but the Wildcats squeezed a surprise career-high 31 from Donte DiVincenzo, who took home MOP honors in convincing fashion.”

Top line: “Fifty years after Martin Luther King was assassinated, the civil rights leader’s family and admirers were marking the anniversary of his death with marches, speeches and quiet reflection on Wednesday. The commemorations stretched from his hometown of Atlanta to Memphis, where he died, and points beyond, including the nation’s capital.”