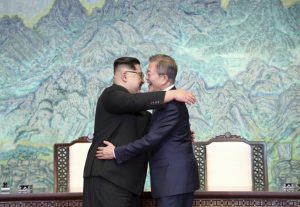 A historic one-day summit between North Korean leader Kim Jong Un and South Korean President Moon Jae-in led to the announcement that they signed an agreement committing to denuclearization and talks aimed at ending the Korean War.

President Donald Trump hosted his first state visit, welcoming French President Emmanuel Macron with tours of historical sites, a state dinner, and an opportunity to address Congress. In his speech, Macron called for the U.S. to reject isolationism in favor of multilateralism around climate change, the Iran nuclear deal and other global issues.

White House physician Dr. Ronny Jackson withdrew his name from consideration to be Veterans Affairs secretary after multiple reports alleged that he had over-prescribed opioids to staff, was inebriated on the job, and fostered a hostile work environment. And the Senate confirmed former CIA Director Mike Pompeo as the new secretary of state, replacing Rex TIllerson who departed the role last month.

Bill Cosby was convicted on three charges of aggravated indecent assault for allegedly drugging and sexually assaulting at least one woman. The 80-year-old TV star faces up to 30 years in prison.

A shooting at a Nashville-area Waffle House left four people dead and sparked a nearly two-day manhunt for the shooter, Travis Reinking, who was eventually arrested in nearby woods.

On the other side of the Atlantic, the United Kingdom got a new prince, Prince Louis Arthur Charles. The royal newborn was born to the Duke and Duchess of Cambridge and is fifth in line to the throne.

1. North and South Korea vow to end the Korean War in historic accord – CNN, James Griffiths

Top line: “The leaders of North and South Korea have committed themselves to the complete denuclearization of the Korean Peninsula and pledged to bring a formal end to the Korean War, 65 years after hostilities ceased. In a remarkable day-long summit that weighed heavy with symbolism, South Korean President Moon Jae-in and his North Korean counterpart, Kim Jong Un embraced, planted a tree and talked alone for more than 30 minutes. Then they signed the Panmunjom Declaration for Peace, Prosperity and Unification on the Korean Peninsula, which commits the two countries to denuclearization and talks to bring a formal end to conflict. It was a startling conclusion to the first meeting between leaders of the two countries in 10 years.” 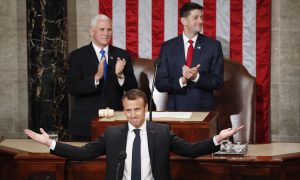 French President Emmanuel Macron gestures as he is introduced before speaking to a joint meeting of Congress on Capitol Hill in Washington, Wednesday, April 25, 2018. Standing behind him are Vice President Mike Pence and House Speaker Paul Ryan of Wis., (AP Photo/Pablo Martinez Monsivais)

Top line: “French President Emmanuel Macron on Wednesday delivered an impassioned call for multilateralism and U.S. engagement in the world, saying it was “an essential part of our confidence in the future.” Speaking to a joint meeting of Congress, amid frequent standing ovations and cheers, Macron recalled the long history of U.S.-French relations, and the countries’ shared values and culture in areas as diverse as democracy and freedom, human and civil rights, literature, jazz and the “Me Too” movement. Much of what he said, although couched in stirring and global terms, posed a direct challenge to the Trump administration and to the U.S. president with whom Macron has said he has a special relationship.” 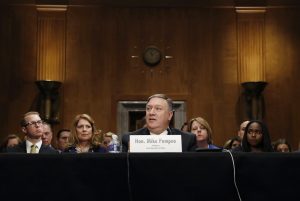 Top line: “The Senate easily confirmed Mike Pompeo on Thursday as the United States’ 70th secretary of state, elevating the current C.I.A. director and an outspoken foreign policy hawk to be the nation’s top diplomat.In the end, the 57-to-42 tally lacked the drama of other nail-biting confirmation votes in the Trump era.” 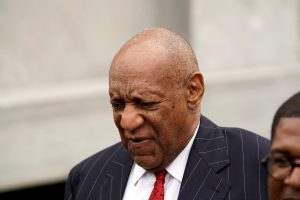 Actor and comedian Bill Cosby departs after a pretrial hearing for his sexual assault trial at the Montgomery County Courthouse in Norristown, Pennsylvania, March 30, 2018. REUTERS/Jessica Kourkounis

Top line: “Bill Cosby, who once embodied the idealized American father on a wildly popular sitcom, was convicted of sexual assault on Thursday in a high-stakes retrial after a half-dozen women testified that the famed comedian drugged and assaulted them. The jury found Cosby, 80, guilty on all three counts of aggravated indecent assault against one woman, Andrea Constand, 45, drawing an emotional reaction from his other accusers in the courtroom. The verdict was one of the first major courtroom victories for the #MeToo movement, which has exposed sexual harassment and misconduct in entertainment, media, politics and beyond.” 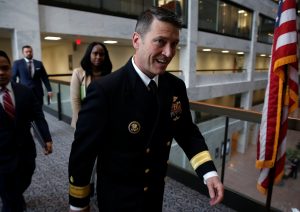 Top line: “Rear Adm. Ronny Jackson, President Trump’s embattled nominee to lead the Department of Veterans Affairs, has withdrawn from consideration for the post amid allegations he had fostered a hostile work environment and behaved improperly while serving as the top doctor leading the White House medical unit. The allegations included providing “a large supply” of the opioid Percocet to a member of the White House Military Office and wrecking a government car while driving drunk after a Secret Service going-away party. Jackson denied wrecking a vehicle to reporters.”

Top line: “The “crazy Stormy Daniels deal” got even crazier Thursday as President Donald Trump made bombshell statements about that porn star’s legal claim against him — and his lawyer Michael Cohen prepared to deal with the fallout from pleading the Fifth Amendment in the Daniels suit. Daniels’ lawyer, Michael Avenatti, immediately crowed that Trump’s comments were “hugely damaging” to the president’s legal defense against a lawsuit by the actress. All of this occurred shortly before a key hearing in Manhattan federal court, where prosecutors and lawyers for Cohen and Trump were set to discuss details of how to handle evidence recently seized from Cohen as part of a criminal probe of him.”

Top line: “Bipartisan legislation to protect special counsel Robert Mueller now lies in the hands of Senate Majority Leader Mitch McConnell after the GOP-led Senate Judiciary Committee voted Thursday to advance it. McConnell, R-Ky., has said the bill is unnecessary and he won’t let it reach the Senate floor. But the chairman of the Senate Judiciary Committee added to the pressure on McConnell by voting for the measure and saying McConnell should change his mind.”

Top line: “Police on Monday arrested the man suspected of fatally shooting four people at a Waffle House restaurant, ending a 36-hour manhunt after tips from the public led police to search secluded woods nearby. Photos posted online by Nashville police showed Travis Reinking, a 29-year-old construction worker, in custody. He was suspected of opening fire with an assault rifle at the restaurant early Sunday then fleeing the scene naked.”

Top line: “A man accused of using a rented van to plough into a busy Toronto sidewalk has been charged with 10 counts of first-degree murder and 13 counts of attempted murder as Canadian authorities attempted to make sense of what is thought to be one of the deadliest incidents of violence in the country’s history.”

Top line: “The Duke and Duchess of Cambridge have named their third child Louis Arthur Charles. The couple’s second son was born at 11:01 BST on Monday at the Lindo Wing of St Mary’s Hospital in London, weighing 8lb 7oz. A tweet from Kensington Palace said the baby would be known as His Royal Highness Prince Louis of Cambridge (pronounced Lou-ee, not Lou-iss). The new prince is fifth in line to the throne.”

~HeatherC is reading about Sunday Reads