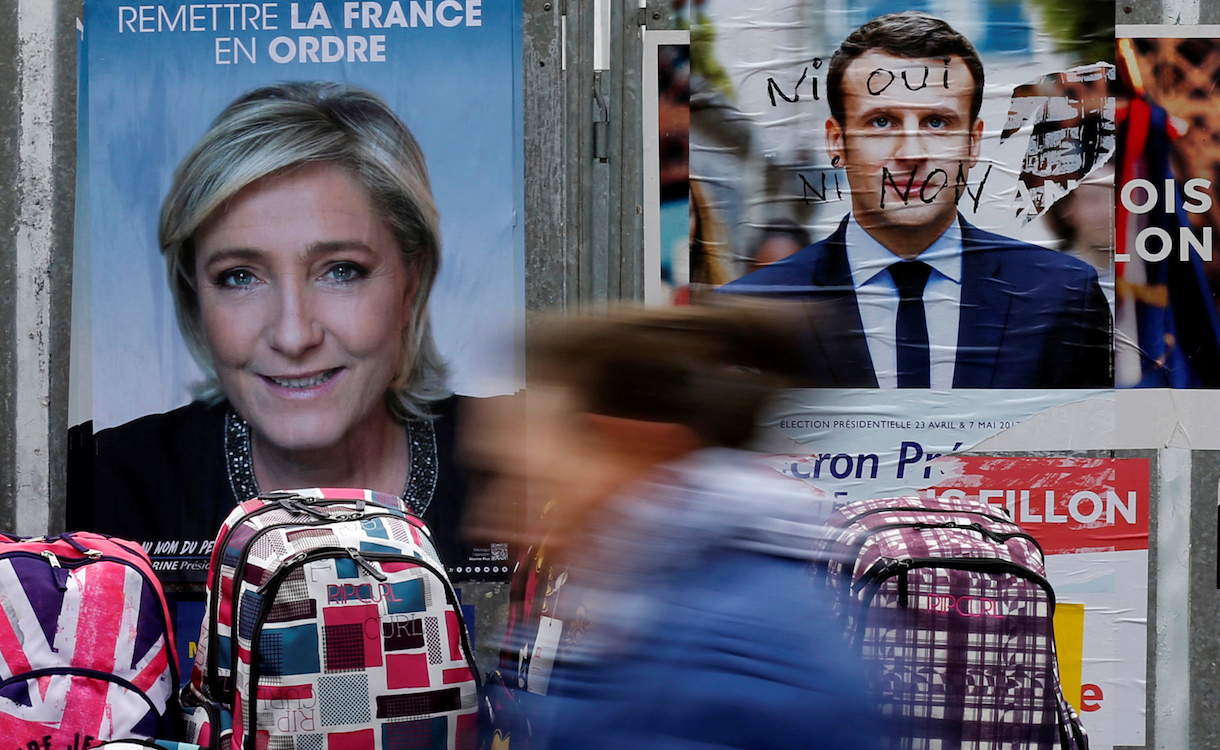 As Trump reaches the end of his first 100 days in office this weekend, he unveiled a new tax plan, hinted that conflict with North Korea is possible and signed a short-term bill to avert government shutdown. Meanwhile, the Pentagon announced Thursday that Trump’s former adviser Michael Flynn was under investigation amid an FBI probe over foreign government payments.

Elsewhere in the U.S., United Airlines settled a lawsuit, for an undisclosed amount, with a man filmed being dragged off a flight earlier this month. Arkansas carried out its fourth execution in eight days, having previously not held one in 12 years and conservative commentator Ann Coulter pulled out of a speech at UC Berkeley following concerns over violent protests.

It was also a surprising week in French politics as party leaders Marine Le Pen and Emmanuel Macron made it through to the second round of the country’s presidential election. Neither candidate is a member of the two main parties that have dominated France’s government for decades.

Top line: “The Trump administration unveiled what it called the biggest tax cuts ‘in history’ on Wednesday, in a move that will simplify the US tax system, slash taxes for businesses large and small – including Trump’s own – eliminate inheritance taxes and set the president on a collision course with Congress over the likely $2tn-plus cost of the proposal.”

Top line: “U.S. President Donald Trump said on Thursday a major conflict with North Korea is possible in the standoff over its nuclear and missile programs, but he would prefer a diplomatic outcome to the dispute.”

Top line: “Lawmakers cleared the measure easily and Trump signed it with just hours to spare before the shutdown deadline at midnight. But with Trump marking his presidency’s milestone Saturday, he did not wring any major legislation out of Congress, despite a renewed White House push to revive the House GOP’s health care bill in time for a vote that could give him bragging rights.”

4. Michael Flynn Is The Subject Of A Pentagon Investigation—NPR, Bill Chappell

Top line: “The Pentagon is investigating whether Michael Flynn broke the law by receiving money from a foreign source after retiring from the service, according to a letter written by the Department of Defense’s acting inspector general to House Oversight Chairman Jason Chaffetz.”

Top Line: “Voters in France have comprehensively snubbed the country’s political establishment, sending far-right populist Marine Le Pen and political novice Emmanuel Macron through to the second round of the country’s presidential election.”

Top line: “Nearly two-thirds of Americans give President Donald Trump poor or middling marks for his first 100 days in office, including a plurality who say he’s off to a ‘poor start,’ according to results from a brand-new NBC News/Wall Street Journal poll.”

7. Two U.S. troops killed and one wounded in Afghanistan, near where massive bomb was dropped—The Los Angeles Times

Top line: “The service members were conducting an operation alongside Afghan forces in Nangarhar province, where a U.S.-backed offensive is underway against Islamic State-Khorasan, or ISIS-K. Khorasan is the historic name for a region that encompassed parts of modern-day Afghanistan.”

Top line: “David Dao, the doctor who was seen being dragged off a United Airlines jet this month in videos that sparked widespread outrage, has reached a settlement with the airline for an undisclosed amount, his lawyers said on Thursday.”

Top line: “Arkansas executed a death-row inmate late Thursday in the state’s fourth lethal injection in eight days, concluding a frantic execution schedule officials said was necessary to carry out death sentences before one of their drugs expired.”

Top line: “Ann Coulter’s speech at the University of California at Berkeley was canceled. But the debate and hostility that were unleashed by the controversy over the conservative commentator’s planned event continued here Thursday. Demonstrators who participated in other recent violent clashes on Berkeley’s streets began gathering at a city park and on campus Thursday to fight for free speech or to protest hate speech. Many were geared up – with helmets, shields and padding – for a confrontation at the park, just blocks from the campus and Berkeley High School. And the possibility of violence caused authorities to turn out in force.”