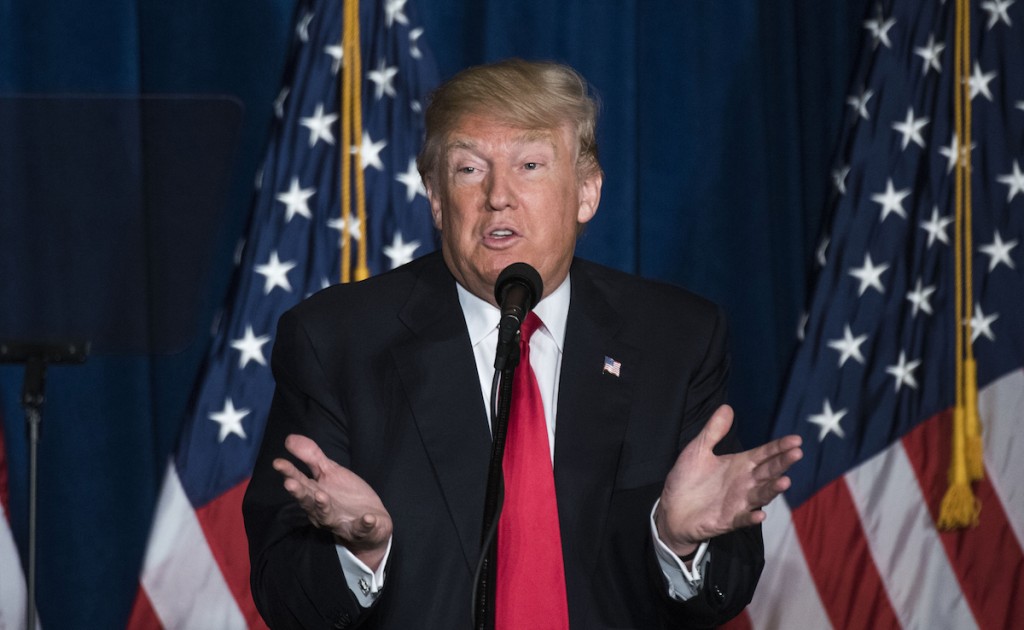 Donald Trump speaks about his foreign policy positions during an event at The Mayflower Hotel in Washington, Wednesday, April 27, 2016. Photo By Al Drago/CQ Roll Call

The 2016 U.S. presidential election dominated this week’s news, from the Tuesday’s decisive election results to protests around Republican frontrunner Donald Trump’s appearances in California. Get caught up on news from the campaign trail below and read about some of the other biggest news of the week, as it appeared in The Daily Edition.

Top line: “The Republican presidential front-runner proposed a sweeping redirection of America’s global role in a major speech, part of a string of planned addresses designed to flesh out what a Trump administration would look like and to establish leadership credentials ahead of an increasingly probable general election clash with Democrat and former Secretary of State Hillary Clinton.

The billionaire businessman simultaneously addressed restive American voters and global elites worried by his fiery rhetoric on national security: He stressed that the United States would always put its economic and foreign policy interests first but said that allies in Europe, Asia and the Middle East would benefit from a much stronger, less ambiguous U.S. role in the world — as long as they were prepared to pay up.”

Top line: “Protesters in California forced Donald Trump to leave his motorcade and walk along a highway on Friday, amid chaotic demonstrations in which activists torched an American flag and set fire to a piñata of the Republican frontrunner. Hundreds of protesters repeatedly tried to storm the hotel where Trump was due to address the California Republican convention in Burlingame, near San Francisco International Airport.”

Top line: “Mr. Cruz named a running mate, Carly Fiorina, to help bring down Donald J. Trump, the Republican favorite, and both spoke of Mr. Trump in the language of relentless opposition, casting him as a sinister figure who must not be allowed to become president.”

Top line: “Trump is winning, and winning big…The ‘Stop Trump’ movement can’t…Sorry, Sanders, Clinton isn’t a regional candidate…Cruz is a fish out of water on the East Coast…Sanders can’t close in cities…Make that one for 46.”

Top line: “Iraqi officials declared a state of emergency for all of Baghdad Saturday after protesters loyal to popular Shiite cleric Muqtada al-Sadr breached the heavily fortified Green Zone, home to government buildings and foreign embassies, including the American one.”

5. Obama says new US troops in Syria will be essential—Associated Press, Darlene Superville

Top line: “President Barack Obama on Monday announced the deployment to Syria of an additional 250 U.S. special operations forces to assist local troops who are trying to dislodge Islamic State extremists from their war-torn country, significantly broadening the American presence there.”

Top line: “The 70-year-old man from San Juan died from an auto-immune reaction to the virus in late February, Puerto Rico’s Health Secretary Ana Rius said…Zika is mostly known for causing microcephaly, a birth defect marked by an abnormally small head size that can lead to severe developmental problems in babies. There is also strong evidence linking the virus to Guillain-Barre, a paralyzing neurological syndrome that causes the immune system to attack nerves.”

Top line: “North Korea has sentenced a former Virginia man to 10 years in prison with hard labor for subversion, its official news agency said Friday, in the latest case involving an American being detained by Kim Jong Un’s regime.

Kim Dong-chul, 62, who was born in South Korea but became a U.S. citizen in 1987, was accused of ‘perpetrating the state subversive plots and espionage against the DPRK,’ the Korean Central News Agency reported, using the official abbreviation for North Korea.”

Top line: “The air controller was wrong. His mistake was one link in a chain of human errors and equipment and procedural failures that led to the devastating attack on a Doctors Without Borders hospital in Afghanistan last year that killed 42 people, the Defense Department said Friday, in its first extensive account of what happened in the city of Kunduz, early on the morning of Oct. 3.

In a heavily redacted report, which runs more than 3,000 pages, military investigators described a mission that went wrong from start to finish. Even after Doctors Without Borders informed American commanders that a gunship was attacking a hospital, the airstrike was not immediately called off because, it appears, the Americans could not confirm themselves that the hospital was actually free of Taliban.”