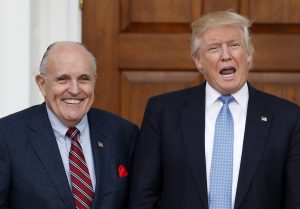 Israeli Prime Minister Benjamin Netanyahu accused Iran of violating its 2015 nuclear deal with the United States and other nations by continuing to develop nuclear weapons. The allegations come as Trump weighs whether to pull the U.S. out of the agreement.

White House lawyer Ty Cobb announced he was stepping down from the team, to take effect at the end of the month. He will be replaced by Emmet Flood, one of the lawyers who represented then-President Bill Clinton during his impeachment proceedings.

Data firm Cambridge Analytica shut down amid ongoing investigations by the U.S. and U.K. governments into alleged harvesting of over 87 million Facebook users’ data for use in political campaigns. 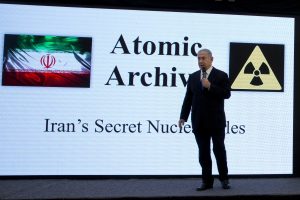 Israeli Prime Minister Benjamin Netanyahu presents material on Iran’s purported nuclear program in Tel Aviv. Netanyahu displayed what he said was a trove of Iranian nuclear documents collected by Israeli intelligence. The Mossad, long shrouded in mystery and mythology, is legendary in international intelligence circles for being behind what are believed to be some of the most daring covert operations. (AP Photo/Sebastian Scheiner, File)

Top line: “Days before President Trump was to decide whether to pull out of the 2015 nuclear deal with Iran, Mr. Netanyahu presented records from a secret warehouse in Tehran, making the case that Iranian leaders had deceived the international nuclear agency when they insisted their nuclear program was for peaceful purposes. Israeli spies seized the documents in an overnight raid in January, a senior Israeli official said. But Mr. Netanyahu did not provide any evidence that Iran had violated the nuclear agreement since it took effect in early 2016. That suggests that the Israeli prime minister — who has opposed the deal since its inception, and even went to the American Congress to try to block it — was hoping that the disclosures would bolster Mr. Trump’s resolve to scuttle the agreement on May 12.”

Top line: “White House lawyer Ty Cobb is leaving his position, and a lawyer who represented former President Bill Clinton during his impeachment process is joining President Donald Trump’s legal team as it adopts a more adversarial posture toward the special counsel’s investigation. Cobb has been discussing his retirement for several weeks and let chief of staff John Kelly know he would be retiring at the end of May, White House press secretary Sarah Sanders said in a statement. She later confirmed reports that Emmet Flood, who represented Clinton in the late 1990s, is joining the White House staff.” 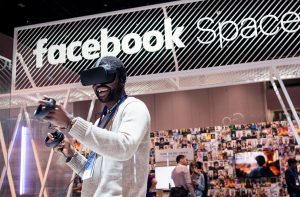 Barnabas Lazarus tries out the new Oculus Go during the annual F8 summit at the San Jose McEnery Convention Center in San Jose, California on May 1, 2018. – Facebook chief Mark Zuckerberg announced the world’s largest social network will soon include a new dating feature — while vowing to make privacy protection its top priority in the wake of the Cambridge Analytica scandal. (JOSH EDELSON/AFP/Getty Images)

4. Everything Facebook launched at F8 and Why – TechCrunch, Anna Escher, Josh Constine

Top line: “Day 1 of Facebook’s F8 conference was packed with announcements and updates. Here are 10 big takeaways from Mark Zuckerberg’s keynote on Day 1.”

Top line: “California and more than a dozen other states are suing EPA over Administrator Scott Pruitt’s recent decision to roll back greenhouse gas emissions standards for cars. The lawsuit comes just days after sources said the Department of Transportation is planning to propose freezing fuel economy standards at model year 2020 levels. That could pave the way to a lower EPA greenhouse gas standard as well as an effort to block California from enforcing its own more stringent greenhouse gas standards.”

Top line: “Seven states, led by Texas, have filed a lawsuit against the Trump administration to end the Deferred Action for Childhood Arrivals (DACA) program — launching a new front in the fight over the Obama-era immigration policy. Alabama, Arkansas, Louisiana, Nebraska, South Carolina and West Virginia joined Texas to collectively urge the federal government to declare the program unconstitutional and halt the issuing or renewing of DACA permits. The lawsuit alleges that the Obama administration exceeded its legal authority when it unilaterally created the program without the approval of Congress.”

Top line: “At least 26 people have been killed in two bombings in the Afghan capital Kabul, including several journalists documenting the scene. AFP chief photographer in Kabul, Shah Marai, is among the victims. The first explosion was carried out by an attacker on a motorbike. A second followed about 15 minutes later after a crowd, including several reporters, had gathered at the scene. The Islamic State group (IS) said it had carried out the attack.”

Top line: “All nine people on board were killed when a Puerto Rico Air National Guard cargo plane, on what was to be its last flight before retirement, crashed on Wednesday near Savannah, Georgia, scattering fiery debris over a highway and railroad tracks, authorities said on Thursday. Officials said the plane, a Hercules WC-130, was believed to be around 50 years old but was in good mechanical condition, and was making what had been scheduled to be its last flight.”

Top line: “Cambridge Analytica, the embattled data firm that worked on President Trump’s 2016 presidential campaign, has told employees it is shutting down, along with its UK counterpart SCL Elections. The move, which impacts all offices of both companies worldwide, comes amid recent revelations that the company harvested the data of up to 87 million Facebook users without their consent, according to multiple sources close to the company.”

Top line: “T-Mobile US Inc. agreed to acquire Sprint Corp. for $26.5 billion in stock, a wager that the carriers can team up to build a next-generation wireless network and get a jump on industry leaders Verizon Communications Inc. and AT&T Inc. The deal follows years of will-they-won’t-they deliberations between Deutsche Telekom AG, the German company that controls T-Mobile, and SoftBank Group Corp., the Japanese owner of Sprint, and comes about five months after an earlier merger attempt collapsed. The combination reduces the U.S. wireless industry to three major competitors from four, ensuring heavy scrutiny from regulators.”