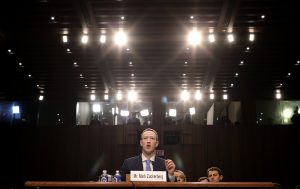 Facebook co-founder, Chairman and CEO Mark Zuckerberg testifies before a combined Senate Judiciary and Commerce committee hearing in the Hart Senate Office Building on Capitol Hill April 10, 2018 in Washington, DC. Zuckerberg, 33, was called to testify after it was reported that 87 million Facebook users had their personal information harvested by Cambridge Analytica, a British political consulting firm linked to the Trump campaign. (Photo by Chip Somodevilla/Getty Images)

Facebook CEO Mark Zuckerberg faced scrutiny from members of the House and Senate over how his company handles user data and whether it should be regulated. The hours of testimony came after a political consulting firm, Cambridge Analytica, harvested data of up to 87 million users — including Zuckerberg himself.

House Speaker Paul Ryan announced his retirement, to take effect next January. The news rocked the Republican Party ahead of the mid-term elections and led to guesses over who would succeed him as third in line to the presidency. Homeland Security Adviser Tom Bossert also resigned this week.

The FBI raided the offices and hotel room of Michael Cohen, who is the long-time personal attorney of President Trump, as part of a months-long investigation into fraudulent business dealings. The search warrant was issued by the Southern District of New York and is a separate investigation from the Russia probe being led by Special Counsel Robert Mueller.

Trump himself made world headlines by condemning a chemical gas attack on Syrian civilians, but not committing to military action yet. He also asked his advisers to look into rejoining the Trans-Pacific Partnership — a trade agreement with 11 other countries along the Pacific Rim — despite having pulled out of the deal over a year ago.

On the domestic front, Trump ordered a task force to review the U.S. Postal Service’s “pricing, policies and workforce costs” and issued a full pardon to Lewis “Scooter” Libby, the former chief of staff to ex-Vice President Dick Cheney.

Top line: “Over two days, nearly 100 lawmakers in the House and Senate interrogated Mr. Zuckerberg about the company’s handling of user information. He faced almost 600 questions, including whether the company should be more heavily regulated, whether it intentionally censors conservative content and how much Russians may have meddled with America’s democratic process through the social network. The hearings came in the wake of revelations that the political consulting firm Cambridge Analytica improperly harvested data of up to 87 million Facebook users.” 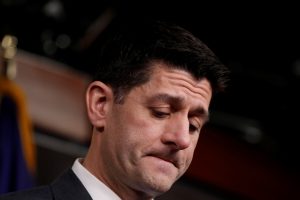 House Speaker Paul Ryan (R-WI) addresses a news conference where he announced he would not seek re-election in November, on Capitol Hill in Washington. REUTERS/Aaron P. Bernstein

Top line: “House Speaker Paul Ryan is not seeking re-election and will retire from Congress after this year, the Wisconsin Republican announced Wednesday. “You realize something when you take this job,” Ryan told reporters on Capitol Hill on Wednesday morning. “It’s a big job with a lot riding on you … but you also know this is not a job that does not last forever. … You realize you hold the office for just a small part of our history. So you better make the most of it.” He reminded reporters that he took the job “reluctantly” in 2015, when he took over from John Boehner, but Ryan also said he has no “regrets.”” 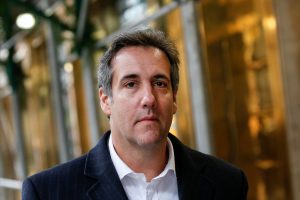 Top line: “Federal prosecutors said in a court filing Friday that the criminal probe that led them to raid the offices of President Donald Trump’s personal lawyer, Michael Cohen, is focused on the attorney’s “personal business dealings” and has been going on for months. In the filing with a court in New York, prosecutors blacked out a section describing what laws they believe Cohen has broken, but they said the “crimes being investigated involve acts of concealment” and suspected fraud. They also made clear that investigators have been gathering extensive evidence for some time as part of an ongoing grand jury investigation.” 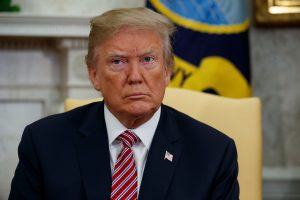 FILE – In this April 10, 2018, file photo, President Donald Trump listens as he meets in the Oval Office of the White House, in Washington. Trump said Thursday, April 12, that an attack on Syria could take place “very soon or not so soon at all!” (AP Photo/Evan Vucci, File)

Top line: “The White House said Thursday that President Donald Trump has not made any final decisions regarding a U.S. response to a deadly chemical attack in Syria after convening with national security advisers at the White House. The president told reporters ahead of the meeting that he was reviewing all options amid growing international calls for action against Syrian President Bashar Assad’s regime. Defense Secretary Jim Mattis was among the top U.S. officials attending the White House meeting with the president.”

Top line: “The president has asked chief economic advisor Larry Kudlow and U.S. Trade Representative Robert Lighthizer to consider trying to rejoin the Trans-Pacific Partnership (TPP), according to White House spokeswoman Lindsay Walters. He wants them to “take another look at whether or not a better deal could be negotiated,” she said. In a tweet on Thursday night, Trump said the U.S. would only join the TPP if the deal were “substantially better.””

Top line: “President Donald Trump ordered the creation of a task force to review business practices at the United States Postal Service, a move that could affect one of the president’s favorite corporate targets: Amazon.com Inc. “The USPS is on an unsustainable financial path and must be restructured to prevent a taxpayer-funded bailout,” the president said in an order that was released Thursday night. The order calls for an examination of the Postal Service’s pricing, policies and workforce costs.”

Top line: “Senior staff were initially worried about former National Security Advisor Mike Flynn and thought somebody was needed to “keep an eye on him.” Bossert was partly brought in to fulfill that role and focus more on domestic terrorist threats — but it never worked out that way as Flynn was gone in a matter of weeks. H.R. McMaster’s entrance further essentially stripped Bossert of his terrorism work. Bossert ended up playing an important role on natural disasters, but that was a very different job than what he was brought in to do.”

Top line: “President Donald Trump on Friday pardoned Lewis “Scooter” Libby, the chief of staff to former Vice President Dick Cheney who was caught up in the investigation into the leak of the identity of CIA officer Valerie Plame. “I don’t know Mr. Libby,” Trump said in a statement, adding, “but for years I have heard that he has been treated unfairly. Hopefully, this full pardon will help rectify a very sad portion of his life.””

Top line: “The Justice Department Inspector General alleges in a damaging report made public Friday that former FBI Deputy Director Andrew McCabe inappropriately authorized the disclosure of sensitive information to a reporter and then misled investigators and former FBI Director James B. Comey about it on several occasions. The report is remarkable for its level of detail, casting McCabe as a man who lied to investigators and his own boss about his role in a disclosure of information, even while he lashed out at others who he thought might be responsible for leaks.”

Top line: “Volkswagen has replaced its chief executive with Herbert Diess, who takes on responsibility for the entire company after overseeing the VW brand. He takes over from Matthias Mueller, who was appointed in 2015 at the height of the diesel emissions scandal. Mr Diess has clashed with unions and is known for his cost-cutting measures. The move is part of sweeping changes announced by the German company, which also owns several other brands including Audi and Porsche. The carmaker said it will reorganise its 12 brands by creating six new vehicle divisions and a special arm devoted to China, its largest market.”