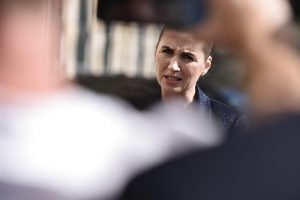 Denmark’s Prime Minister Mette Frederiksen talks to the press after US President cancelled his state visit after her government said its territory Greenland was not for sale on August 21, 2019 in Copenhagen, Denmark. – “I am both annoyed and surprised that the US president has canceled a state visit,” Frederiksen told reporters, adding: “Denmark and the US are not in crisis, the US is one of our closest allies.” (Photo by Mads Claus Rasmussen/AFP/Getty Images)

The week ended with another escalation of the U.S.-China trade war: first, China announced $75 billion in tariffs on U.S. goods as retaliation for President Donald Trump’s pending tariffs, set to take effect after the holiday shopping season. Trump then responded by ordering U.S. companies to stop doing business with China, then hiking existing U.S. tariffs on all Chinese goods from 25 percent up to 30 percent.

Trump also strained relations with ally Denmark, calling off a September state visit and criticizing the country’s prime minister after being told that Greenland, which is a Danish province, is not for sale.

Also, student activists with March for Our Lives unveiled a five-point gun control proposal, Attorney General William Barr reassigned the director of the Bureau of Prisons as part of the fallout over accused child sex abuser Jeffrey Epstein’s death, and the NYPD fired Daniel Pantaleo—the police officer who used a banned chokehold on unarmed Eric Garner, who subsequently died.

Billionaire conservative activist and philanthropist David Koch died at the age of 79.

And global concern over the environmental impact of man-made fires that have been engulfing the Amazon rainforest for three weeks spurred European leaders to threaten economic penalties on Brazil if its pro-deforestation president, Jair Bolsonaro, does not take action.

1. Trump Says He Will Raise Existing Tariffs on Chinese Goods to 30% – The New York Times, Alan Rappeport and Keith Bradsher

Top line: “President Trump, angered by Beijing’s decision on Friday to retaliate against his next round of tariffs and furious at his Federal Reserve chair for not doing more to juice the economy, said he would increase taxes on all Chinese goods and demanded that American companies stop doing business with China. Mr. Trump, in a tweet, said he would raise tariffs on $250 billion worth of Chinese goods to 30 percent from the current rate of 25 percent beginning Oct. 1. And he said the United States would tax the remaining $300 billion worth of imports at a 15 percent rate, rather than the 10 percent he had initially planned. Those levies go into effect on Sept. 1. Those levels are likely to exacerbate the financial pain already being felt from the tariffs as companies and consumers face higher prices for products that they buy from China. Even before the new 30 percent rate, the tariffs were expected to cost the average American household more than $800 per year, according to research by the Federal Reserve Bank of New York.”

Top line: “President Trump on Wednesday lashed out at Danish Prime Minister Mette Frederiksen, saying the leader of the U.S. ally had made “nasty” comments about his interest in having the United States purchase Greenland. Trump announced Tuesday night that he was calling off a planned two-day state visit to Copenhagen early next month over Frederiksen’s refusal to entertain the sale of Greenland, a self-governing country that is part of the kingdom of Denmark. Frederiksen told reporters Wednesday she was surprised by Trump’s change in plans and also lamented the missed opportunity to celebrate the historical alliance between Denmark and the United States, saying preparations for the visit had been “well underway.” Frederiksen called the idea of the sale of Greenland “absurd” over the weekend after news broke of Trump’s interest — a characterization that apparently offended him.”

Top line: “Rep. Seth Moulton (D-Mass.) announced his exit from the 2020 Democratic presidential race Friday during a speech at the Democratic National Committee’s summer meeting. Moulton said he will run for reelection to his House seat and will relaunch a group dedicated to winning down-ballot races, which he called “just as important as the presidential [race].”  An Iraq War veteran, Moulton tried to focus his presidential campaign on foreign policy and issues involving military veterans. He spoke candidly about mental health and experiencing post-traumatic stress disorder. His poll numbers hovered around 1% since his entry into the race in April.” 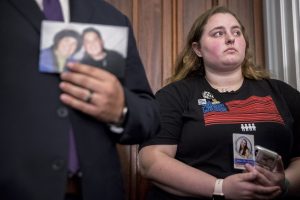 Brady Campaign to Prevent Gun Violence Vice President Christian Heyne, left, holds a photograph of him and his mother who was a victim of gun violence and Jaxon O’Mara, right, with March For Our Lives, holds a photograph of her fellow student Jaelynn Rose Willey who was a victim of gun violence as House Majority Leader Steny Hoyer of Md., Rep. Debbie Dingell, D-Mich., Rep. Anthony Brown, D-Md., and others, hold a news conference calling for Senate action on H.R. 8 – Bipartisan Background Checks Act of 2019 on Capitol Hill in Washington, Tuesday, Aug. 13, 2019. (AP Photo/Andrew Harnik)

Top line: “Student activists and survivors of the 2018 deadly mass shooting in Parkland, Florida, are proposing bold action to reduce gun violence by half over the next decade. The initiative led by March for Our Lives — the group of former Parkland students who have turned to promoting gun reform in the wake of the mass shooting — is called the Peace Plan for a Safer America. It aims to get at the root causes of gun violence and open a dialogue about gun use in America, where nearly 40,000 people die annually from guns. The plan not only makes recommendations to end mass shootings, but also outlines the steps needed to combat everyday gun violence that grips communities nationwide. It comes shortly after two deadly mass shootings over the span of one weekend earlier this month in El Paso, Texas, and Dayton, Ohio.”

Top line: “Attorney General William Barr removed the acting director of the Bureau of Prisons from his position Monday, more than a week after millionaire financier Jeffrey Epstein took his own life while in federal custody. Hugh Hurwitz’s reassignment comes amid mounting evidence that guards at the chronically understaffed Metropolitan Correctional Center in New York abdicated their responsibility to keep the 66-year-old Epstein from killing himself while he awaited trial on charges of sexually abusing teenage girls. The FBI and the Justice Department’s inspector general are investigating his death. Barr named Kathleen Hawk Sawyer, the prison agency’s director from 1992 until 2003, to replace Hurwitz. Hurwitz is moving to a role as an assistant director in charge of the bureau’s reentry programs, where he will work with Barr on putting in place the First Step Act, a criminal justice overhaul.”

Top line: “The Trump administration on Wednesday announced a proposal to detain undocumented families together indefinitely, replacing the agreement that set a 20-day limit for holding children, with President Donald Trump saying it would discourage migrants from coming to the US. The rule, unveiled by acting Homeland Security Secretary Kevin McAleenan, is part of the administration’s aggressive effort to revamp immigration laws as the number of families and unaccompanied minors crossing the US-Mexico border has increased. In recent months, the administration has proposed rules that could make it more difficult for immigrants to get green cards, worked to end temporary protected status for migrants from certain countries and limit avenues to declare asylum.” 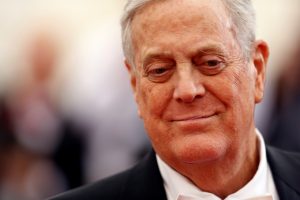 Top line: “David Koch, the billionaire conservative activist and philanthropist, who was lauded by the right and rebuked by the left, has died. He was 79. Charles Koch did not say how his brother died, but David Koch blamed deteriorating health when he stepped down last year from Koch Industries, a Kansas-based energy and chemical corporation with an annual revenue of about $110 billion. The brothers were tied as 11th richest in the world this year in a ranking by Forbes. At the time of his death, David Koch was worth $42.4 billion. With the wealth from their business, David and Charles Koch helped to build a massive conservative network of donors for organizations that work to mobilize voters and sway elected officials in support of libertarian-leaning economic policies. The brothers are also credited with helping to fuel the tea party. While celebrated on the right, the Koch brothers are often regarded by Democrats as a symbol of the corrupting force of corporate money in American politics.”

Top line: “Planned Parenthood said Monday it will withdraw from the federal Title X program that helps low-income people access contraception rather than comply with what it calls a new Trump administration “gag rule” that prohibits it from providing abortion referrals to those patients. The announcement comes amid a protracted legal battle with the White House over changes to the nearly 50-year-old Title X program, which annually provides $286 million to healthcare providers to fund family planning services such as birth control. The administration required grantees to explain by Monday how they would comply with the new rule. All seven Planned Parenthood facilities that are direct grantees in the program and hundreds of “sub” grantees that received funding through a third party will withdraw from Title X.” 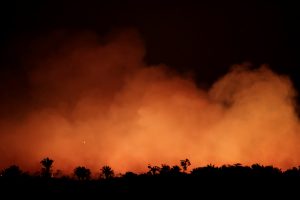 Top line: “France and Ireland say they will not ratify a huge trade deal with South American nations unless Brazil does more to fight fires in the Amazon. French leader Emmanuel Macron said President Jair Bolsonaro had lied to him about his stance on climate change. There are currently a record number of fires in the Amazon rainforest – a major source of oxygen for the world. Environmental groups say the fires are linked to Mr Bolsonaro’s policies, which he denies. European leaders have also expressed dismay over the fires. UK Prime Minister Boris Johnson called the fires “not only heartbreaking” but “an international crisis”.”

Top line: “New York City Police Commissioner James O’Neill announced Monday that the police department is terminating the officer involved in the fatal 2014 altercation with Eric Garner, ending a five-year battle over the officer’s status. Officer Daniel Pantaleo used a chokehold on Garner, which is banned by the city’s police department, O’Neill said. The decision backs the recommendation of an NYPD administrative judge earlier this month that Pantaleo should be fired for his role in Garner’s death.”

~ HeatherC is reading Back to School by Chowhound