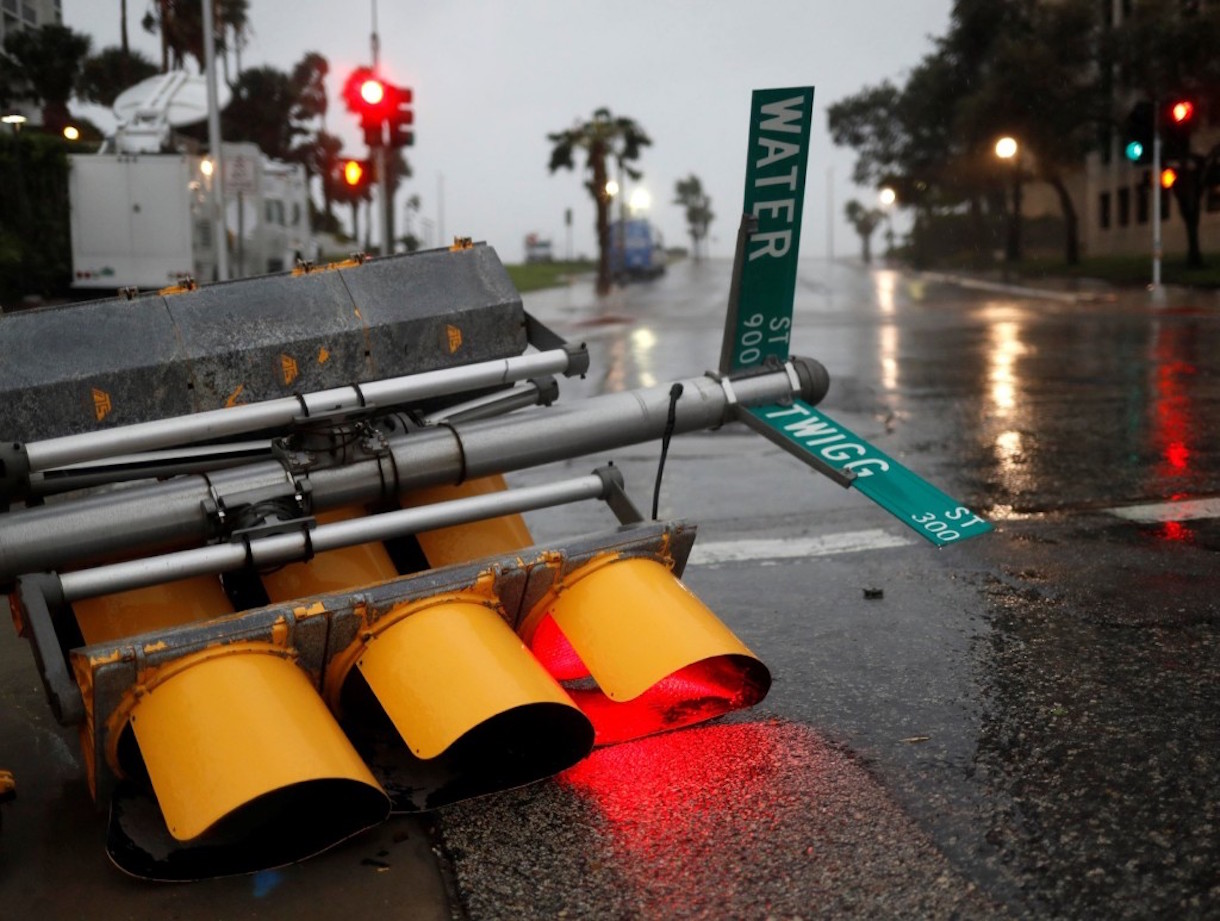 Traffic lights on a street after being knocked down by high winds as Hurricane Harvey approaches Corpus Christi. REUTERS/Adrees Latif

Texas residents prepared for the worst this week as Hurricane Harvey hit the area. At least two people died, after torrential rain and strong winds led to collapsed buildings and flooded streets. The most powerful storm to hit the U.S. in 13 years, Harvey was downgraded to a tropical storm Saturday, but experts expect heavy rain and flooding to continue until Tuesday.

Earlier in the week the nation watched as a solar eclipse engulfed the sky Monday. A 2,500-mile-long zone across the country saw day briefly turn to night for the first time in nearly a century.

President Donald Trump announced his intention to win the war in Afghanistan by committing more U.S. troops to the cause. He called on NATO allies to do the same. The president also signed a memo Friday banning transgender individuals from openly serving in the military.

And following the fourth overseas Navy accident since January, with 10 soldiers still missing from the USS John S. McCain, Vice Admiral Joseph P. Aucoin was relieved of his duties.

Top line: “The monster hurricane, which had weakened to a tropical storm by Saturday afternoon, made landfall as a Category 4 hurricane late Friday night near Rockport, a city of about 10,000 people. An estimated 40 percent of the residents did not evacuate, according to officials.”

2. Moon blots the sun out of the sky in historic US eclipse—Associated Press, Marcia Dunn

Top line: “Millions of Americans gazed in wonder at the cosmic spectacle, with the best seats along the so-called path of totality that raced 2,600 miles (4,200 kilometers) across the continent from Oregon to South Carolina.”

Top line: “President Trump on Monday announced he will not pull out U.S. troops from Afghanistan, saying he’s committed to a new strategy aimed at winning the nation’s longest war.”

4. These are the 10 sailors lost from the USS John S. McCain—The Washington Post, Thomas Gibbons-Neff and Alex Horton

Top line: “After more than 80 hours of searching thousands of miles of open sea, the U.S. Navy now hopes only to recover the bodies lost from the USS John S. McCain after it collided with an oil tanker near Singapore. The collision Monday between the McCain — a 500-foot-long guided-missile destroyer — and the Liberian-flagged Alnic MC left five Navy sailors injured and 10 missing.” 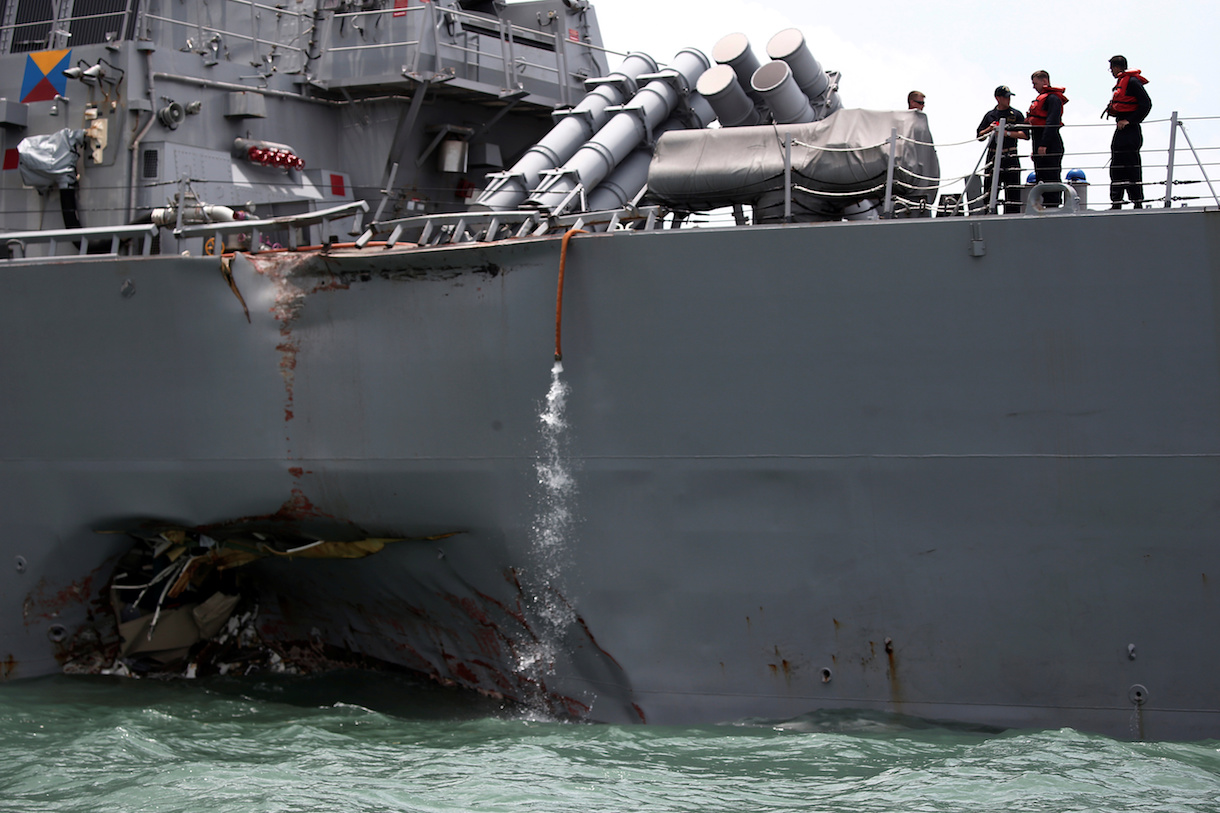 Top line: “Vice Adm. Joseph P. Aucoin, the head of the Seventh Fleet, the Navy’s largest overseas, was removed Wednesday in connection with the four accidents since January, including two fatal collisions in the past two months, according to a statement by the Navy.”

Top line: “A Massachusetts hospital worker who considered winning the lottery a ‘pipe dream’ cashed in the most valuable ticket in U.S. history Thursday, hours after her numbers came up for the  $758.7 million Powerball jackpot.”

Top line: “President Trump issued an executive pardon Friday to Joe Arpaio, the controversial former Arizona sheriff who was a hero to the right and a national nemesis of Latinos, immigration advocates and civil rights groups.”

Top line: “President Donald Trump revved up supporters on Tuesday with a defense of his response to a white supremacist-organized rally in Virginia and a promise to shut down the U.S. government if necessary to build a wall along the border with Mexico.”

Top line: “Venezuela’s President Nicolás Maduro has said that a preliminary analysis shows that new financial sanctions imposed by the United States will lead to a halt in oil exports to the US.”

Top line: “President Donald Trump signed a memo on Friday that formally directs the Pentagon to ban transgender individuals from openly serving in the U.S. military. The directive gives the Department of Defense six months to develop an implementation plan that will go into effect on March 23, 2018.”