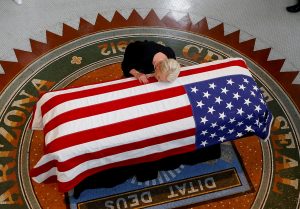 Senator John McCain died at the age of 81, sending politicians and citizens alike into collective mourning for the Vietnam War veteran and prisoner-of-war, who was often described as a hero for both his military service and efforts at bipartisanship.

The presidents of the United States and Mexico announced a tentative trade deal that might eventually replace the North American Free Trade Agreement, of which Canada is also a partner. Leaders of the U.S. and Canada now face negotiations of their own.

One year after Hurricane Maria devastated Puerto Rico, the death toll was raised from just a few hundred to nearly 3,000 after an independent study spent six months examining the storm’s ongoing impact.

White House counsel Donald McGahn will be leaving his position in the fall, announced President Donald Trump in a tweet.

Police continue to investigate the deadly shooting at a video game competition held in Jacksonville, Florida, that left three people dead, including the alleged shooter, who committed suicide. The alleged shooter was reportedly a gamer himself and targeted fellow gamers after losing a game earlier in the event.

In sports news, a judge allowed athlete Colin Kaepernick’s lawsuit against the National Football League to move to trial, suggesting there was enough evidence to support his accusation that the league conspired to keep him from playing due to his social activism.

Federal workers will not be receiving a raise in January after President Trump cancelled the previously agreed upon increase, citing budget concerns.

In other business news, software company SurveyMonkey filed paperwork to go public in the hopes of raising $100 million after struggling with sales in the first half of the year, and the creator of a blueprint for 3D-printed guns is selling the material for $10 each in defiance of a court order.

Notable playwright and comedy writer Neil Simon died at the age of 91 due to complications from pneumonia while receiving treatment at a New York hospital. He penned many hits, including “The Odd Couple” and “Barefoot in the Park.”

Top line: “Sen. John McCain, who died Saturday, will be honored in three cities this week. Here’s what to expect: Thursday: The senator was honored at a memorial service at North Phoenix Baptist Church. An aircraft carrying his body then headed to Washington, DC. Friday: McCain will lie in state at the US Capitol. Saturday: A mass of mourners will gather at the National Cathedral in Washington to attend McCain’s memorial service. Sunday: The late senator will be buried in a private ceremony at US Naval Academy’s cemetery in Maryland.” 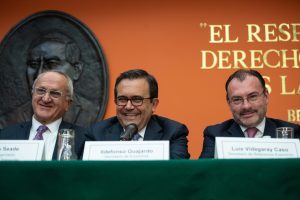 Top line: “The United States and Canada are aiming to reach a deal by the end of the week that keeps the three-country North American Free Trade Agreement intact, as President Trump and Prime Minister Justin Trudeau of Canada expressed optimism that the two countries could resolve their differences. Both countries are under pressure to find a way to keep Nafta intact and to prevent the United States from moving ahead without Canada. Republican lawmakers have warned the White House that a bilateral agreement with just Mexico would probably not pass congressional muster, and companies have said a Nafta without Canada would cause severe economic damage.” 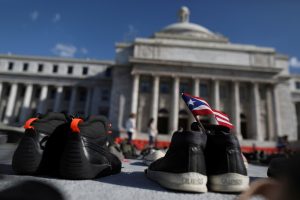 FILE PHOTO: A Puerto Rican flag is seen on a pair of shoes as hundreds of pairs of shoes displayed at the Capitol to pay tribute to Hurricane Maria’s victims after a research team led by Harvard University estimated that 4,645 people lost their lives, a number not confirmed by the government, in San Juan, Puerto Rico June 1, 2018. (REUTERS/Alvin Baez/File Photo)

Top line: “Puerto Rico’s governor updated the island’s official death toll for victims of Hurricane Maria on Tuesday, hours after independent researchers from George Washington University released a study estimating the hurricane caused 2,975 deaths in the six months following the storm. As a result of Maria, researchers estimate 22 percent more people died during the six months after the storm than would have had the hurricane not struck. They also said those most likely to have died were poor people and the elderly.” 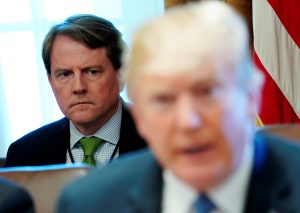 Top line: “The exit of McGahn — a low-key, 50-year-old lawyer who has been at Trump’s side since the early days of the 2016 presidential campaign — comes at a fragile moment inside the White House amid escalating tensions between the president and the Department of Justice in recent weeks. McGahn, who has deep ties in Washington’s legal community, has long functioned as Trump’s liaison to Justice officials and Congress. He has frequently played the informal role of peacemaker, as special counsel Robert S. Mueller III and his team have pursued interviews, including with McGahn, and documents from White House officials as part of their investigation into Russian interference in the 2016 presidential campaign. Trump’s announcement of McGahn’s departure came as a surprise, including to McGahn.”

Top line: “At the Chicago Pizza and Sports Grille, the lunch shift was swinging into action across from the glistening St. Johns River, most customers oblivious to the intense contest buzzing in the back unless they cut through the space on their way to the restroom. At about 1:30 p.m., two hours into the tournament, both worlds collided in a blitz of bullets that would leave three dead, 11 injured – and a stunned nation grappling again with the high price of gun violence.”

Top line: “An arbitrator is sending Kaepernick’s grievance with the NFL to trial, denying the league’s request to throw out the quarterback’s claims that owners conspired to keep him out of the league because of his protests of social injustice. Kaepernick, who led the San Francisco 49ers to a Super Bowl appearance and NFC championship game in consecutive seasons, argues that owners have colluded to keep him off any NFL roster since he hit free agency in 2017. Burbank’s decision means there was sufficient evidence of collusion to keep Kaepernick’s drive going. Now some owners, coaches and team executives will be called to testify during the season, a situation the league hoped to avoid.”

Top line: “President Donald Trump canceled automatic pay raises for civilian federal workers in 2019 as Congress continues to negotiate on salary increases. Trump made the announcement in a letter released by the White House on Thursday to House Speaker Paul Ryan and Senate Majority Leader Mitch McConnell. Trump cited the need to “maintain efforts to put our Nation on a sustainable fiscal course.” Congress can still raise federal workers’ pay in spending legislation. The Senate has already approved a 1.9 percent pay increase for next year but the House would still need to approve it. The House version of the legislation doesn’t include a raise. The two bills must now be reconciled.”

Top line: “Neil Simon, whose comic touch in “The Odd Couple,” “Barefoot in the Park” and many other hits on stage and screen made him the most commercially successful playwright of the 20th century — and perhaps of all time — has died, according to his representative. He was 91. Early in his career, critical consensus pegged Simon as an insubstantial writer more interested in drawing laughs than in probing the truth of human existence. But as time went on, he pushed to deepen his plays and expose more nakedly the pain — much of it derived from his own experience — that he identified as the engine of his comedy.”

Top line: “SurveyMonkey, a company with software that companies can use to get input from employees, customers and others, on Wednesday filed to go public on the Nasdaq under the symbol SVMK. The company is looking to raise as much as $100 million in the deal, according to the filing.”

Top line: “The libertarian activist who was blocked by a federal court from publishing his 3D-printed gun blueprints is distributing them to the public anyway, Cyrus Farivar and Nathan Mattise reported for ArsTechnica. Cody Wilson, the owner of Defense Distributed, said he’s still complying with the court order, which, he argued, only blocked him from publishing the blueprints for free on the internet. To get around that limitation, he’s charging a “suggested price” of $10 for each (although people can pay what they want) and distributing the blueprints via a mailed “DD-branded flash drive” or, potentially, email or secure download links.”

~HeatherC is reading about Back To School by NPR