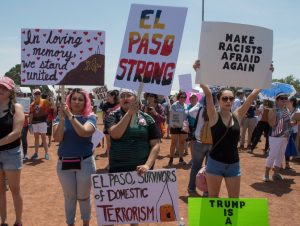 The nation was rocked by two mass shootings in less than 24 hours, first in a Walmart in El Paso, Texas and 13 hours later outside a bar in Dayton, Ohio. At least 31 people were killed. President Donald Trump visited both cities and was met with mixed reactions.

The El Paso shooter was arrested and is under investigation for domestic terrorism due to his alleged political and anti-immigrant motivation, as detailed in an online manifesto posted on 8chan, which then saw its internet hosting service dropped by service provider Cloudflare.

Last week’s deadly shooting at the Gilroy Garlic Festival in California is also now under investigation by the FBI as an act of domestic terrorism.

Nobel laureate and American literary icon Toni Morrison passed away at the age of 88.

In government turnover news, Trump tapped National Counterterrorism Center chief Joseph Maguire to replace Dan Coats as acting director of national intelligence. The move sparked the resignation of Deputy Director Sue Gordon, who was next in line for the position.

U.S. Ambassador to Russia and former Utah governor Jon Huntsman also submitted his resignation and Puerto Rico installed its third governor in under a week.

U.S. Immigration and Customs Enforcement agents conducted a mass raid on poultry factories in Mississippi, arresting a record 680 suspected undocumented immigrants, later releasing around 300 of them, and sparking criticism for leaving children parentless.

While “MAGA bomber” Cesar Sayoc was sentenced by a New York court to 20 years in prison for sending package bombs to Democratic Party politicians and donors, as well as news organizations, Tennessee released Cyntoia Brown from prison after she served 15 out of 30 years for killing the man who she said trafficked her as a child for sex.

Top line: “President Trump visited Dayton, Ohio, and El Paso on Wednesday on a day intended as a show of compassion to cities scarred by a weekend of violence, but which quickly devolved into an occasion for anger-fueled broadsides against Democrats and the news media. Mr. Trump’s schedule was meant to follow the traditional model of apolitical presidential visits with victims, law enforcement officials and hospital workers after calamities like the mass shootings that resulted in 31 deaths in Dayton and El Paso and that created a new sense of national crisis over assault weapons and the rise of white supremacist ideology. That plan went awry even before Mr. Trump, who has acknowledged his discomfort with showing empathy in public, departed Washington.” 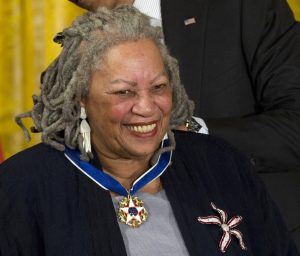 Toni Morrison receives her Medal of Freedom award during a ceremony in the East Room of the White House, May 29, 2012. (AP Photo/Carolyn Kaster)

Top line: “Toni Morrison, the Nobel Prize-winning novelist who conjured a black girl longing for blue eyes, a slave mother who kills her child to save her from bondage and other indelible characters who helped transfigure a literary canon long closed to African Americans, died Aug. 5 at a hospital in the Bronx. She was 88. Paul Bogaards, a spokesman for the publishing company Alfred A. Knopf, announced the death and said the cause was complications from pneumonia. Ms. Morrison spent an impoverished childhood in Ohio steel country, began writing during what she described as stolen time as a single mother and became the first black woman to receive the Nobel Prize in literature. Critically acclaimed and widely loved, she received recognitions as diverse as the Pulitzer Prize and the selection of her novels — four of them — for the book club led by talk-show host Oprah Winfrey.”

Top line: “President Donald Trump announced Thursday night that Joseph Maguire, the leader of the National Counterterrorism Center, is his new pick to be the acting director of national intelligence. The announcement came not long after Trump tweeted that Sue Gordon, the country’s number two intelligence official and an intelligence veteran of more than 30 years, would resign. White House officials had been signaling such a move for days, saying Trump would prefer to have a political loyalist in the role. Under normal protocol, Gordon would have become acting director after outgoing Director of National Intelligence Dan Coats resigned. But administration officials told CNN that the White House was reviewing whether it could legally choose an acting director outside the line of succession. And two sources told CNN that Gordon was not viewed by some in the administration as the type of political loyalist Trump wanted in the role. Maguire will take over for Coats, whose last day with the administration is on August 15.” 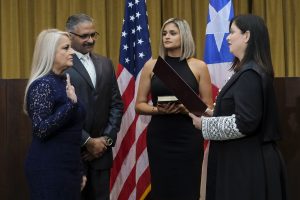 Top line: “A day after Puerto Rico got its third governor in less than a week following angry street protests, top officials from new leader Wanda Vázquez’s own party talked openly Thursday about their desire to see a fourth take over the position. Senate President Thomas Rivera Schatz, who played a key role in the successful court challenge to the swearing-in of Pedro Pierluisi as governor after Gov. Ricardo Rosselló resigned, publicly backed Jenniffer González — Puerto Rico’s non-voting representative in Congress — to be secretary of state, which would put her first in line to become governor if the office should be vacated again. He said González had everyone’s support, but he added that he would not ask Vázquez to step down.”

5. Huntsman to step down as ambassador to Russia – POLITICO, Caitlin Oprysko

Top line: “Jon Huntsman, the U.S ambassador to Russia, will step down this fall, he told the president Tuesday. In a letter submitted to President Donald Trump and obtained by POLITICO, Huntsman called it a “high honor” to have served in Moscow during a “historically difficult period in bilateral relations.” The former Utah governor and diplomat under both Republican and Democratic administrations has held the post since the early days of Trump’s presidency. His resignation comes amid reports that he is considering launching a third gubernatorial run in Utah. Huntsman’s resignation will take effect Oct. 3, which he said he hopes will allow enough time for his replacement to be named and confirmed.”

Top line: “A day after U.S. Immigration and Customs Enforcement officers arrested nearly 700 people in sweeping raids at several food-processing plants in Mississippi, officials said Thursday that nearly half of those detained had already been released. A total of 680 people were arrested, according to ICE, in what has been described as “record setting” raids in terms of size and scope. But a statement released Thursday by the U.S. Attorney’s Office for the Southern District of Mississippi said that approximately 300 of them had been released. The procedures ICE followed in this week’s raids stood in contrast to President Trump’s “zero tolerance” policy of separating migrant children from their parents at the U.S. border. That policy came under widespread and harsh criticism. Included among those released in the Mississippi raids were 18 juveniles, with the youngest being 14 years old, the news agency said, quoting Jere Miles, a special agent in charge of ICE Homeland Security Investigations in New Orleans.”

Top line: “A handful of companies that provide crucial internet services have announced they will not work with the anonymous online forum 8chan or other companies that work with it in the wake of a shooting in El Paso, Texas, in which at least 22 people were killed. Cloudflare, which provides a variety of internet services including protection against common cyberattacks, said Sunday that it planned to cease doing business with 8chan after the alleged gunman in the El Paso attack apparently posted a racist screed to the website. Cloudflare’s CEO, Matthew Prince, wrote in a blog post that his company was dropping 8chan, which the Anti-Defamation League has tied to the rise of online extremism, after gunmen in Christchurch, New Zealand, and Poway, California, also used the site.” 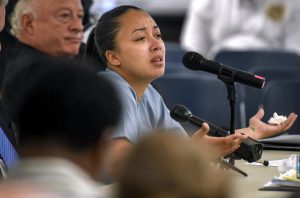 This May 23, 2018, file photo shows Cyntoia Brown appearing in court during her clemency hearing at the Tennessee Prison for Women in Nashville, Tenn. Several Democratic Tennessee lawmakers are urging Republican Gov. Bill Haslam to grant clemency to a woman convicted of first-degree murder as a teen. (Lacy Atkins/The Tennessean via AP, Pool, File)

Top line: “Cyntoia Brown, an alleged sex trafficking victim sentenced to life in prison for killing a man when she was 16, was released on parole early Wednesday morning, according to the Tennessee Department of Corrections. She was released from the Tennessee Prison for Women in northwest Nashville around 3:30 a.m. CT, her attorneys confirmed. Brown, who was institutionalized for nearly half her life, is free after serving 15 years of a life sentence for the 2004 murder of a Nashville real estate agent. She will be on parole for 10 years. Conditions of her parole include her compliance with an approved release plan, that she maintain employment or educational enrollment and that she participate in regular counseling sessions, said Dorinda Carter, spokeswoman for the Tennessee Department of Corrections.  She’s also required to perform at least 50 hours of community service, including working with at-risk youth. Earlier this year, former Gov. Bill Haslam took the rare step of commuting her sentence, paving the way for her release.”

Top line: ““MAGA Bomber” Cesar Sayoc was sentenced to 20 years in prison on Monday for sending 16 mail bombs to 13 people around the United States last year, including leading critics of President Donald Trump such as former President Barack Obama, ex-Vice President Joe Biden, former Secretary of State Hillary Clinton, actor Robert De Niro and financier George Soros. Judge Jed Rakoff noted that Sayoc, even if he proves to be a model prisoner, “will be about 75 years old before he can be released.” Sayoc, a 57-year-old Florida resident whose own lawyers called him “a Donald Trump super-fan,” pleaded guilty on March 21 to 65 criminal counts, which included using weapons of mass destruction and illegal mailing of explosives with intent to kill or injure. Prosecutors said Sayoc’s crimes amounts to a “domestic terrorist attack.””

Top line: “Srinagar, the main city in Kashmir, is in complete lockdown following a dramatic announcement by the Indian government on Monday, which stripped the territory of its autonomy and divided it in two. Under the changes, Kashmir’s constitution and flag will disappear. Rules that have prevented people from outside Kashmir buying land in the territory, India’s only Muslim-majority state, are also scrapped. Many Kashmiris fear the demography of the state, and their way of life, could be altered. Pakistan responded angrily, with the prime minister, Imran Khan, suggesting India could carry out ethnic cleansing, while China called the decision “unacceptable”. The voices of Kashmiris – whose future will be dramatically affected by the government’s actions – have been almost completely silenced. Hours before the announcement, millions of people in the territory were placed under strict curfew and a wide-ranging communications blackout. In residential areas, where a few people venture outside to sit in side lanes, there is a deep sense of anger and betrayal.”

~ HeatherC is reading Eight to Three: The Back to School Issue by Romper