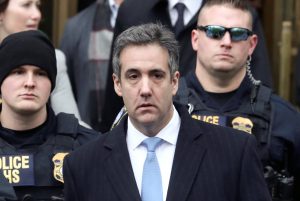 On domestic issues, Trump told Sen. Chuck Schumer and Rep. Nancy Pelosi, both Democrats, that he would be “proud” to oversee a shutdown of the government if Congress failed to approve additional funding for a border wall with Mexico.

U.K. Prime Minister Theresa May survived an attempted vote of no-confidence from opposition members in parliament. However, she still faces an uphill battle around support for Brexit.

In business news, Google CEO Sundar Pichai testified before Congress about the company’s possible expansion plans in China and about allegations of bias against conservative views.

Top line: “Michael Cohen, President Donald Trump’s one-time fixer, was sentenced Wednesday to three years in prison for crimes that included arranging the payment of hush money to conceal his boss’ alleged sexual affairs, telling a judge that he agreed time and again to cover up Trump’s “dirty deeds” out of “blind loyalty.” Separately, the legal and political peril surrounding Trump appeared to deepen when prosecutors announced that another major piece of the investigation had fallen into place: The parent company of the National Enquirer acknowledged dispensing some of the hush money in concert with the Trump campaign to fend off a scandal that could have damaged his bid for the White House.” 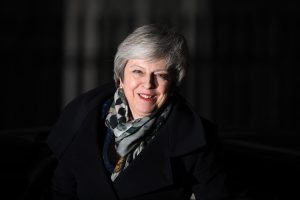 British Prime Minister Theresa May returns to Downing Street after the Confidence Vote in her leadership on December 12, 2018 in London, England. Sir Graham Brady, the chairman of the 1922 Committee, has received the necessary 48 letters (15% of the parliamentary party) from Conservative MP’s that will trigger a vote of no confidence in Prime Minister Theresa May. (Photo by Leon Neal/Getty Images)

2. Theresa May defeats Tory coup over Brexit deal but is left damaged – The Guardian, Heather Stewart

Top line: “Theresa May has won the backing of her party to stay on as prime minister – but more than a third of Conservative MPs voted against her, underscoring the uphill battle she faces in getting her Brexit deal through parliament. Tory MPs rejected a no-confidence motion in the embattled prime minister’s leadership by 200 votes to 117 on Wednesday night, after a swift contest that exposed the bitter split in her party over Brexit.”

Top line: “A Russian gun rights activist pleaded guilty Thursday to conspiring with a senior Russian official to infiltrate the conservative movement in the United States as an agent for the Kremlin from 2015 until her arrest in July. Maria Butina, 30, is the first Russian national convicted of seeking to influence U.S. policy in the run-up to the 2016 election by acting as a foreign agent. She agreed to cooperate in a plea deal with U.S. investigators in exchange for less prison time. Butina admitted to working with an American political operative under the direction of a former Russian senator — now the deputy governor of Russia’s central bank — to forge connections with officials at the National Rifle Association, conservative leaders and candidates in the 2016 U.S. presidential race, including Donald Trump, whose rise to the White House she presciently predicted to her Russian contact.” 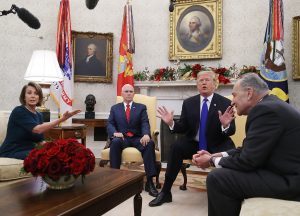 Top line: “President Donald Trump clashed sharply with Nancy Pelosi and Chuck Schumer in a remarkable Oval Office meeting before reporters Tuesday, with the president threatening to shut down the government and the Democrats warning him they will not bend. In a pitched partisan argument televised for all to see, the GOP president and the House and Senate Democratic leaders traded barbs over Trump’s border wall during what was supposed to be a private negotiating session to keep a large swath of the government from shuttering after Dec. 21. And in perhaps his most definitive statement yet, Trump said he would be “proud” to preside over a partial shutdown if that’s what it takes to get his campaign promise fulfilled. Democrats urged the president against such a stance, even as they seized on the chance to blame Trump for any potential shutdown.”

Top line: “The Christmas market in the French city of Strasbourg has reopened, two days after the attack carried out by a gunman on Tuesday evening. Cherif Chekatt was killed on Thursday by police on a city street after he opened fire on officers. Three people died following the shooting at the market and several more are seriously injured. Strasbourg’s mayor Roland Ries said security would be tight: “We have restricted the number of entrances with checkpoints, body searches and bag searches. We have reduced [the number of entry points] for greater control, with a better distribution of police forces,” he told French radio. The city had been in lockdown after the attack while more than 700 police and soldiers hunted down the suspected gunman. Chekatt, 29, had a string of criminal convictions in France and Germany and had become a radical Islamist in jail.”

Top line: “Vast amounts of wetlands and thousands of miles of U.S. waterways would no longer be federally protected by the Clean Water Act under a new proposal by the Trump administration. The proposal, announced Tuesday at the Environmental Protection Agency, would change the EPA’s definition of “waters of the United States,” or WOTUS, limiting the types of waterways that fall under federal protection to major waterways, their tributaries, adjacent wetlands and a few other categories. The change aims to “provide states and landowners the certainty they need to manage their natural resources and grow local economies,”said the EPA’s acting administrator, Andrew Wheeler.”

Top line: “Fentanyl is now the most commonly used drug involved in drug overdoses, according to a new government report. The latest numbers from the US Centers for Disease Control and Prevention’s National Center for Health Statistics say that the rate of drug overdoses involving the synthetic opioid skyrocketed by about 113% each year from 2013 through 2016. The number of total drug overdoses jumped 54% each year between 2011 and 2016. In 2016, there were 63,632 drug overdose deaths.”

Top line: “China intensified its punitive campaign against Canada over the arrest of a top Chinese technology executive by arresting a second Canadian working here and announcing on Thursday that both men faced charges of undermining China’s national security. China’s foreign ministry confirmed the second arrest, a day after suggesting that the first involved a comparatively mild administrative matter involving the registration of a nongovernmental organization. Accusing the two men of national security crimes — as yet unspecified — signaled a serious escalation of the diplomatic crisis that began when Canada detained Meng Wanzhou, the chief financial officer of Huawei, at the request of American prosecutors on charges of bank fraud related to violating sanctions against trade with Iran.” 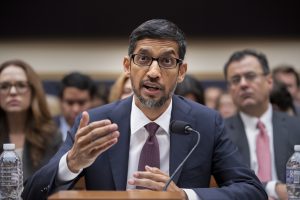 Google CEO Sundar Pichai appears before the House Judiciary Committee to be questioned about the internet giant’s privacy security and data collection, on Capitol Hill in Washington, Tuesday, Dec. 11, 2018. Pichai angered members of a Senate panel in September by declining their invitation to testify about foreign governments’ manipulation of online services to sway U.S. political elections. (AP Photo/J. Scott Applewhite)

Top line: “Google CEO Sundar Pichai sparred with conservative lawmakers who claim the search engine is politically biased while avoiding specific commitments on privacy and company’s plans for a censored search engine in China. Tuesday’s three-hour-long hearing was Pichai’s first appearance before Congress. Google has largely avoided the congressional scrutiny that hit Facebook and Twitter after its top executives declined a request to testify earlier this year.”

10. The Guardians and the War on Truth – TIME, Karl Vick

Top line: “Khashoggi put his faith in bearing witness. He put it in the field reporting he had done since youth, in the newspaper editorship he was forced out of and in the columns he wrote from lonely exile. Khashoggi had fled his homeland last year even though he actually supported much of Crown Prince Mohammed bin Salman’s agenda in Saudi Arabia. What irked the kingdom and marked the journalist for death was Khashoggi’s insistence on coming to that conclusion on his own, tempering it with troubling facts and trusting the public to think for itself. Such independence is no small thing. It marks the distinction between tyranny and democracy. And in a world where budding authoritarians have advanced by blurring the difference, there was a clarity in the spectacle of a tyrant’s fury visited upon a man armed only with a pen. Because the strongmen of the world only look strong. All despots live in fear of their people. To see genuine strength, look to the spaces where individuals dare to describe what’s going on in front of them.”

Magazine to follow: The Guardians: TIME Person of the Year 2018

~ HeatherC is reading Girlhood Around the World by The Washington Post