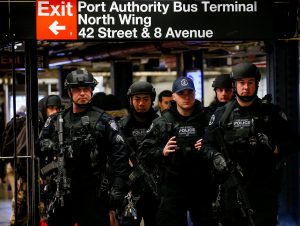 Members of the Port Authority Police Counter Terrorism unit patrol the subway corridor, at the New York Port Authority subway station near the site of an attempted detonation the day before, during the morning rush in New York City, U.S. December 12, 2017. REUTERS/Brendan McDermid

A terror attack was attempted in New York City this week, when an ISIS-inspired attacker sought to detonate a pipe bomb in a walkway below the Port Authority Bus Terminal. No one was killed but five people were treated for minor injuries.

The Alabama election captured much of the national attention throughout the week. The much-watched race resulted in a win by Democrat Doug Jones. He beat Republican Roy Moore, who was hit with allegations of sexual misconduct.

Top line: “A would-be suicide attacker detonated a pipe bomb strapped to his body in the heart of Manhattan’s busiest subway corridor on Monday, sending thousands of terrified commuters fleeing the smoke-choked passageways, and bringing the heart of Midtown to a standstill as hundreds of police officers converged on Times Square and the surrounding streets. But the makeshift weapon failed to fully detonate, and the attacker himself was the only one seriously injured in the blast, which unfolded just before 7:20 a.m. Law enforcement officials said the attacker, identified by the police as Akayed Ullah, 27, chose the location because of its Christmas-themed posters, a motive that recalled strikes in Europe, and he told investigators that he set off his bomb in retaliation for United States airstrikes on ISIS targets in Syria and elsewhere.” 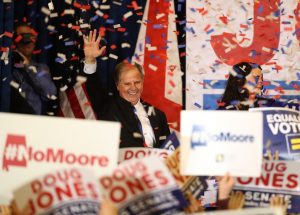 Top line: “Jones’ victory in a state that hadn’t sent a Democrat to Washington in almost 30 years was even more shocking than when Republican Scott Brown won the late Ted Kennedy’s seat in a Massachusetts special election in 2010.” 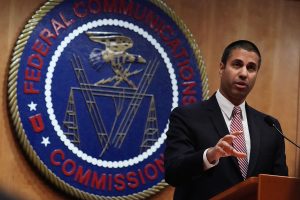 WASHINGTON, DC – DECEMBER 14: Federal Communications Commission Chairman Ajit Pai speaks to members of the media after a commission meeting December 14, 2017 in Washington, DC. FCC has voted to repeal its net neutrality rules at the meeting. (Photo by Alex Wong/Getty Images)

3. What you need to know about the FCC’s net neutrality repeal – CNET, Marguerite Reardon 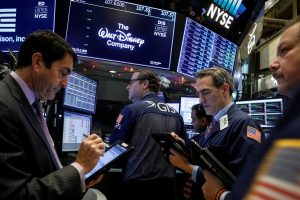 Traders work at the post where Walt Disney Co. stock is traded on the floor of the New York Stock Exchange (NYSE) in New York, U.S., December 14, 2017. REUTERS/Brendan McDermid

Top line: “Walt Disney Co. agreed to a $52.4 billion deal to acquire much of the global empire that media baron Rupert Murdoch assembled over three decades, from a fabled Hollywood studio to Europe’s largest satellite-TV provider to one of India’s most-watched channels. Holders of Murdoch’s 21st Century Fox Inc. will get 0.2745 Disney share for each Fox share, for assets including the movie and TV production house, a 39 percent stake in Sky Plc, Star India, and a lineup of pay-TV channels that include FX and National Geographic, the companies said in statements Thursday.”

Top line: “After weeks of quarrels, qualms and then eleventh-hour horse-trading, Republicans revealed the details of their huge national tax rewrite late Friday — along with announcements of support that all but guarantee approval to give President Donald Trump the Christmas legislative triumph he’s been aching for. The legislation would slash tax rates for big business and lower levies on the richest Americans in a massive $1.5 trillion bill that the GOP plans to muscle through Congress next week before its year-end break. Benefits for most other taxpayers would be smaller. According to the 1,097-page bill released late Friday, today’s 35 percent rate on corporations would fall to 21 percent, the crown jewel of the measure for many Republicans. Trump and GOP leaders had set 20 percent as their goal, but added a point to free money for other tax cuts that won over wavering lawmakers in final talks.”

Top line: “The #MeToo sexual harassment movement roiling the nation reached the doors of the White House on Monday, when three women who last year accused President Trump of sexual misconduct began a renewed public push to gain attention for their allegations. The three accusers were among more than a dozen who had initially come forward during the 2016 presidential campaign. The three reinvigorated their stories this week with an appearance on Megyn Kelly’s NBC show — their first joint interview — and a subsequent news conference in Manhattan, in which they also called on Congress to investigate their claims. The White House dismissed the allegations in a morning statement and an afternoon news conference, saying the president has previously denied any improprieties and arguing that the questions were already litigated as part of his ascension to the presidency.”

Top line: “The raging Thomas Fire claimed the life of a firefighter on Thursday after charring 249,500 acres of California since early December. Fire apparatus engineer Cory Iverson, 32, died while fighting one of the top five largest fires in California’s history, fire officials said. Iverson is survived by his pregnant wife Ashley and their 2-year-old daughter, officials said. His body was brought from the fire line to the city of Ventura on Thursday evening. “Anne and I are saddened by Engineer Cory Iverson’s tragic death,” California Governor Jerry Brown said in a statement. “His bravery and years committed service to the people of California will never be forgotten.”’

Top line: “Jerusalem (CNN)Four Palestinians were killed and hundreds wounded Friday in the West Bank and Gaza during clashes between Israeli troops and protesters opposed to US President Donald Trump’s recognition of Jerusalem as the capital of Israel. Roughly 2,500 Palestinians rolled burning tires and hurled firebombs and rocks at police in several West Bank cities, and another 3,500 clashed with soldiers along the security fence in Gaza, the Israeli army said. Tens of thousands of worshippers came to the al-Aqsa mosque in Jerusalem’s Old City for Friday prayers; hundreds stayed behind after prayers had finished to protest. Some waved the flags of countries most critical of Trump’s announcement, among them those of Turkey and Malaysia.”

Top line: “Prince Harry and Meghan Markle’s wedding will be held on Saturday 19 May 2018, Kensington Palace has announced. The pair confirmed their engagement in November and said the service would be at St George’s Chapel, Windsor Castle.The date breaks with tradition as royal weddings usually take place on a weekday – the Queen wed on a Thursday and the Duke of Cambridge on a Friday.The wedding will be on the same day as the FA Cup Final, which Prince William normally attends as FA president.The Royal Family will pay for the wedding, including the service, music, flowers and reception. The event will take place just a month after the Duke and Duchess of Cambridge are expected to welcome their third child to the family. Ms Markle will be baptised into the Church of England and confirmed before the wedding.”

Top line: “Initially, the second phase of Brexit talks will be dominated by discussions over the transition period, under which the UK will continue to abide by EU law for roughly two years, but not have a role in any decision-making institutions. Theresa May has been given three months to get agreement within the cabinet on the UK government’s vision of a future trade deal, after which substantive talks on the future relationship will begin.”

~SonaliK is reading The Last Jedi by Mashable