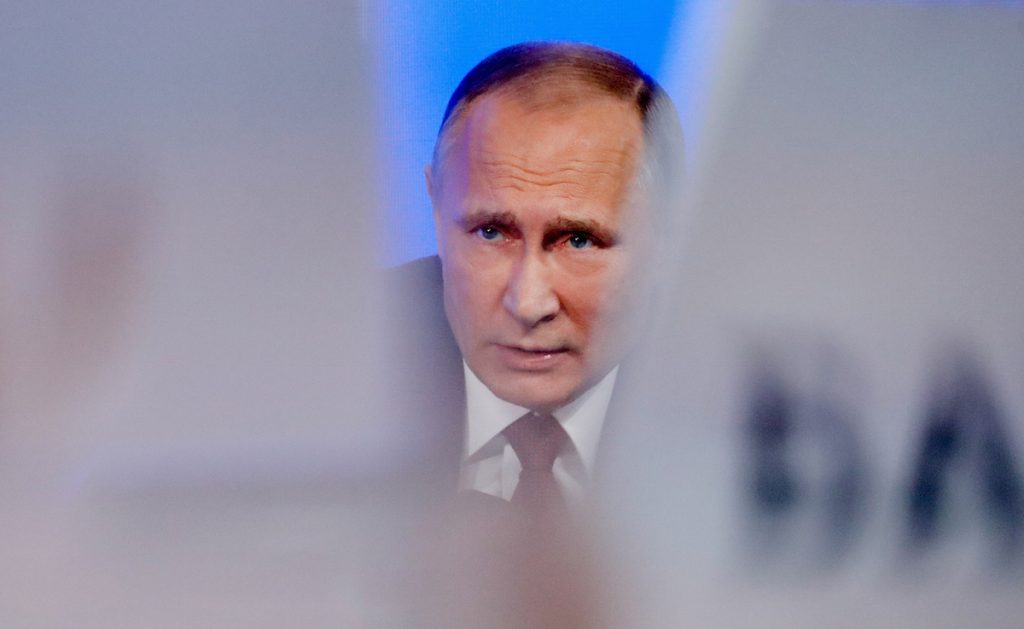 President Barack Obama ordered 35 suspected Russian spies to leave the U.S. and imposed sanctions on Russian intelligence agencies over their intrusion into the presidential election. Russian President Vladimir Putin responded by saying his country would not take further action until the inauguration of President-elect Donald Trump.

Secretary of State John Kerry used an address at the State Department to defend the decision by the U.S. not to veto the UN resolution against Israeli settlements. He also laid out his view of a two-state solution for the Middle East that he said would bring peace to the region. The speech was met with quick criticism from Israeli leader Benjamin Netanyahu, who said Kerry’s speech was “obsessively focused” on settlements.

The year also ended with high profile deaths, including singer George Michael, actress Carrie Fisher and her mother, Debbie Reynolds, one day later.
Read more about these stories and the other biggest news of the week, as it appeared in this week’s Daily Edition.

Top line: “President Barack Obama ordered the expulsion of 35 Russian suspected spies and imposed sanctions on two Russian intelligence agencies over their involvement in hacking U.S. political groups in the 2016 presidential election…Allegations by U.S. intelligence agencies that Russian President Vladimir Putin personally directed efforts to intervene in the U.S. election process by hacking mostly Democrats have made relations even worse.”

Top line: “Russian President Vladimir Putin said Friday that Moscow will not expel American diplomats in response to US sanctions against Russia.

Putin said he would not pursue “irresponsible ‘kitchen’ diplomacy” and would instead attempt to rebuild relations with Washington after the inauguration of US President-elect Donald Trump.”

Top line: “The US secretary of state, John Kerry, has offered a blistering defence of the US decision to allow a UN resolution condemning Israeli settlements, saying if Washington had vetoed it, Israel would have been given a licence for ‘unfettered settlement construction’ and the end of the peace process.

Framing a two-state solution as ‘the only way to achieve a just and lasting peace between Israelis and Palestinians’, Kerry took aim at the Israeli prime minister, Benjamin Netanyahu, for building a coalition that was ‘the most rightwing in Israeli history, with an agenda driven by the most extreme elements’.

Kerry’s speech was the latest chapter in a high-octane diplomatic drama marked by a war of words between the Obama administration and Israel, since the vote on Friday that called Israeli settlements in the West Bank and east Jerusalem a ‘flagrant violation’ of international law.” 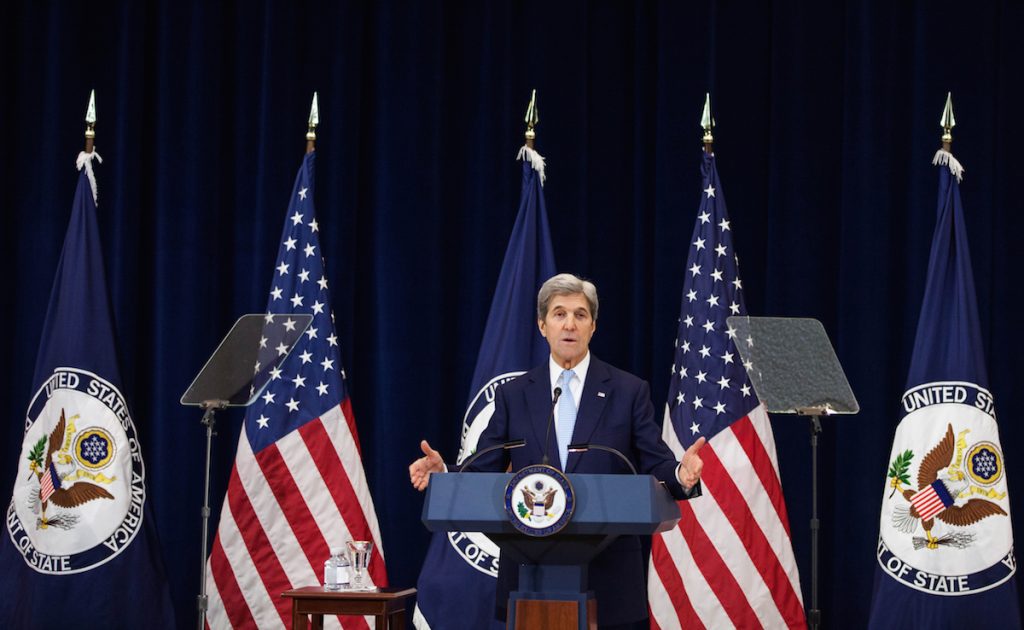 U.S. Secretary of State John Kerry delivers a speech on Middle East peace at The U.S. Department of State on December 28, 2016 in Washington, DC. Photo by Zach Gibson/Getty Images

Top line: “Israeli leader Benjamin Netanyahu has condemned as biased a speech by outgoing US Secretary of State John Kerry on Israeli-Palestinian issues…Mr Netanyahu said he was disappointed with the speech, which he said was ‘unbalanced’ and ‘obsessively focused’ on settlements.” 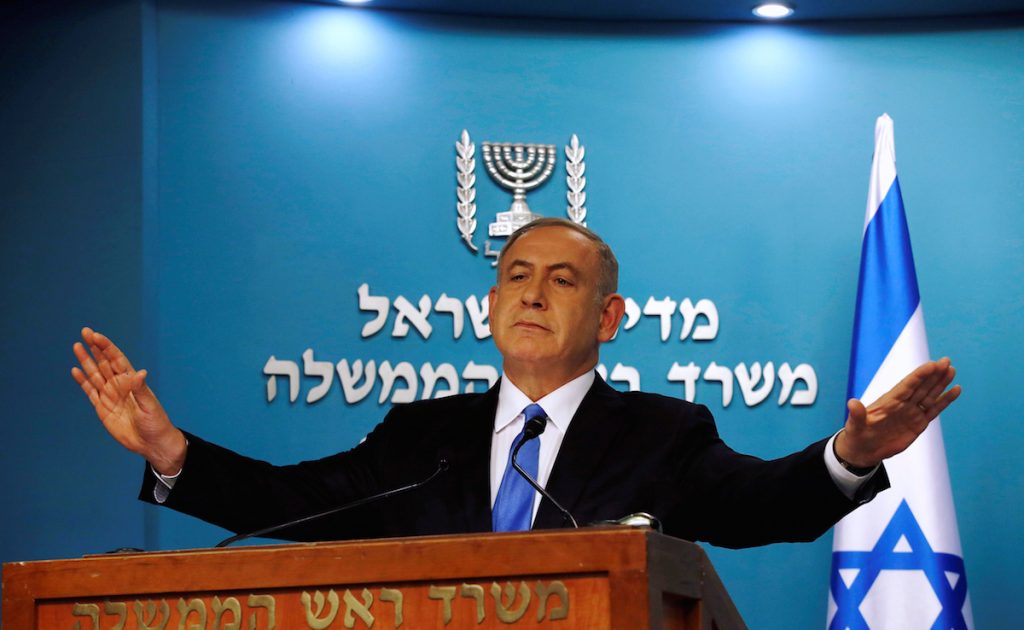 Top line: “Arguing that Americans still subscribe to his vision of progressive change, President Barack Obama asserted in an interview recently he could have succeeded in this year’s election if he was eligible to run.

‘I am confident in this vision because I’m confident that if I had run again and articulated it, I think I could’ve mobilized a majority of the American people to rally behind it,’ Obama told his former senior adviser David Axelrod in an interview for the ‘The Axe Files’ podcast, produced by the University of Chicago Institute of Politics and CNN.”

Top line: “A cease-fire announced by the Syrian government went into ­effect across the country early Friday as part of a broader deal that includes a return to peace talks to end more than five years of war…

The Assad government, backed by Russia and Iran, is now in its strongest position since the start of the war, while rebel groups are mostly boxed into the northwestern province of Idlib and hold no strategically significant urban areas.”

Top line: “Carrie Fisher, the actress, author and screenwriter who brought a rare combination of nerve, grit and hopefulness to her most indelible role, as Princess Leia in the ‘Star Wars’ movie franchise, died on Tuesday morning. She was 60…

After her ‘Star Wars’ success, Ms. Fisher, the daughter of the pop singer Eddie Fisher and the actress Debbie Reynolds, went on to use her perch among Hollywood royalty to offer wry commentary in her books on the paradoxes and absurdities of the entertainment industry.”

Top line: “Hollywood legend Debbie Reynolds died Wednesday, a day after her daughter, actress and author Carrie Fisher, succumbed after a heart episode on a flight from London to Los Angeles…

Reynolds was one of Hollywood’s top actresses and singers in the 1950s and 1960s, and a celebrity whose sometimes rocky personal life was chronicled by the media. She continued to act regularly into the 1990s.”

Top line: “Pop superstar George Michael, who achieved global fame with hits such as ‘Faith’ and ‘Freedom ’90,’ has died at age 53, reportedly of heart failure.

The music legend, who in his heyday was a world-famous sex symbol, was found dead in his home in Oxfordshire, in southeast England, according to his publicist and police.”

Top line: “The leaders of Japan and the United States sought to remind the world that even the most bitter enemies can become allies, during a historic pilgrimage to the hallowed waters of Pearl Harbor…Seventy-five years after Japan’s surprise attack, Abe and President Barack Obama peered down Tuesday at the rusting wreckage of the USS Arizona, clearly visible in the tranquil, teal water. In a show of respect for the war dead, Obama and Abe dropped purple petals into the water and stood in silence.

~GabyS is getting ready for the New Year with the 2017: The Year Ahead Flipboard Magazine