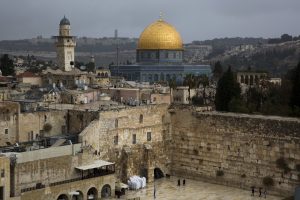 A view of the Western Wall and the Dome of the Rock, some of the holiest sites for for Jews and Muslims, is seen in Jerusalem’s Old City, Wednesday, Dec. 6, 2017. U.S. officials say President Donald Trump will recognize Jerusalem as Israel’s capital Wednesday, Dec. 6, and instruct the State Department to begin the multi-year process of moving the American embassy from Tel Aviv to the holy city. His decision could have deep repercussions across the region. (AP Photo/Oded Balilty)

In a move that shook the international community and reversed decades of American foreign policy, President Trump formally recognized Jerusalem as Israel’s capital this week and ordered the relocation of the U.S. embassy to Jerusalem.

On the domestic front, Southern California was ravaged by deadly wildfires that destroyed hundreds of structures and forced thousands to evacuate and three congressmen resigned following sexual misconduct allegations against them. The Supreme Court allowed enforcement of Trump’s travel ban, Congress passed a two-week spending bill that averted government shutdown and a merger was announced between CVS and Aetna.

Elsewhere in the world, Brexit moved forward, Russia was banned from the 2018 Winter Olympics and same-sex marriage was legalized in Australia. 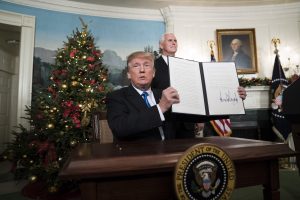 WASHINGTON, DC – DECEMBER 6: President Donald Trump, with Vice President Mike Pence by his side, signs an executive order to declare formal recognition of Jerusalem as the capital of Israel during a statement in the Diplomatic Reception Room of the White House in Washington, DC on Wednesday, Dec. 06, 2017. Trump recognized Jerusalem as Israel’s capital despite intense Arab, Muslim and European opposition to a move that would upend decades of U.S. policy and risk potentially violent protests. (Photo by Jabin Botsford/The Washington Post)

Top line: “President Trump on Wednesday formally recognized Jerusalem as the capital of Israel, reversing nearly seven decades of American foreign policy and setting in motion a plan to move the United States Embassy from Tel Aviv to the fiercely contested Holy City. “Today we finally acknowledge the obvious: that Jerusalem is Israel’s capital,” Mr. Trump said from the Diplomatic Reception Room of the White House. “This is nothing more or less than a recognition of reality. It is also the right thing to do. It’s something that has to be done.”’ 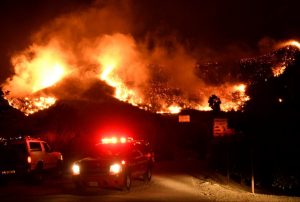 Top line: “As devastating Santa Ana winds picked up Thursday, thousands of firefighters dug in for an extended battle to halt the spread of the biggest wildfire in Southern California as it rampaged over dry hills toward Santa Barbara. Howling gusts continued to usher on the 96,000-acre Thomas Fire, which had destroyed 150 structures in Ventura County and was threatening 15,000 more amid an unusual late-season storm of blazes that closed freeways and spurred mass evacuations all over the region. By late Thursday, the Thomas Fire, which started Monday evening, burned into Santa Barbara County and was within 15 miles of the coastal city of nearly 100,000 people that draws tourists from around the world.” 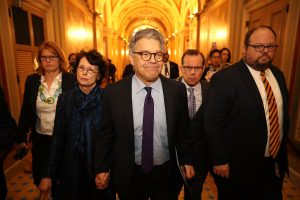 WASHINGTON, DC – DECEMBER 07: Sen. Al Franken (D-MN) (C) and his wife Franni Bryson (L) arrive at the U.S. Capitol Building December 7, 2017 in Washington, DC. Franken announced that he will be resigning in the coming weeks after being accused by several women of sexual harrassment. (Photo by Chip Somodevilla/Getty Images)

Top line: “The national reckoning over sexual harassment swept through Congress on Thursday as Sen. Al Franken, D-Minn., and Rep. Trent Franks, R-Ariz., announced plans to resign over sexual misconduct allegations. Thursday’s resignations — affecting a liberal Democrat and a Tea Party-aligned Republican — reflect the rapid pace of powerful men being held to account for alleged past sexual misconduct in the months after dozens of women claimed sexual abuse by Hollywood producer Harvey Weinstein.” 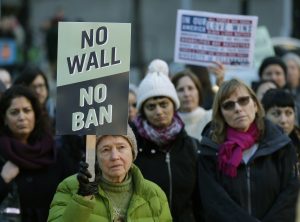 Annie Phillips, of Burien, Wash., holds a sign that reads “No Wall No Ban,” during a protest, Wednesday, Dec. 6, 2017, outside a federal courthouse in Seattle. The U.S. Supreme Court decision allowing President Donald Trump’s third travel ban to take effect has intensified the attention on a legal showdown Wednesday before three judges in Seattle who have been cool to the policy as they hear arguments in Hawaii’s challenge to the ban, which restricts travel to the United States by residents of six mostly Muslim countries and has been reviled by critics as discriminatory. (AP Photo/Ted S. Warren)

Top line: “The Supreme Court on Monday granted President Trump’s request to fully enforce his revised order banning travel to the United States by residents of six mostly Muslim countries while legal challenges to it proceed in lower courts. It was a victory for the White House, which has seen the courts trim back various iterations of the travel ban, and it bodes well for the administration if the Supreme Court is called upon to finally decide the merits of the president’s actions. The court’s move is “a substantial victory for the safety and security of the American people,” Attorney General Jeff Sessions said in a written statement.”

Top line: “Rep. John Conyers Jr. of Michigan, the longest-serving member of the House of Representatives, resigned Tuesday after his support among fellow Democrats collapsed amid accusations of sexual harassment by several female employees. Conyers endorsed his son, John Conyers III, in a rambling radio interview with Detroit host Mildred Gaddis. “I am retiring today, and I want everyone to know how much I appreciate the support, incredible undiminished support I’ve received,” Conyers said. Conyers’ use of the word “retiring” rather than “resigning” left some uncertainty over when he was vacating the congressional seat he has held since 1965. Later in the day, however, he sent a letter to congressional leaders saying he was stepping down “effective today.” Conyers’ replacement will be chosen in a special election.”

Top line: “Congress passed a two-week funding bill Thursday, staving off a government shutdown a day ahead of the deadline. But lawmakers face a turbulent next few weeks as they try to clinch a broader budget deal by the end of the year. Senators approved the measure on a 81-14 vote, soon after the House passed it 235-193. Despite initial reluctance from conservative House Republicans, GOP leadership was ultimately able to pass it with votes to spare.”

Top line: “CVS is buying health insurance giant Aetna, the companies announced Sunday. If approved, the $69 billion acquisition — $77 billion including debt — would drastically remap the health care industry. CVS Health (CVS)is a massive drugstore chain and prescription drug insurer, while Aetna (AET) is one of the nation’s largest health insurers. It would also go down as the largest health insurance deal in history, far exceeding Express Scripts (ESRX)’ $29 billion acquisition of Medco in 2012, the last record-holder. The acquisition is not a done deal. It will have to be approved by antitrust regulators, who have been skeptical of similar health care mergers.”

Top line: “Same-sex marriage has been officially signed into law in Australia, a day after MPs overwhelmingly approved a historic bill. Australia’s Governor-General Peter Cosgrove signed off on the law on Friday – a formality required to enact the legislation. The vote on Thursday set off rarely matched celebrations in parliament, including cheers, hugs and a song. Supporters celebrated across Australia, many donning rainbow colours. “So it is all done. It is part of the law of the land,” Prime Minister Malcolm Turnbull said after a brief ceremony on Friday. He said the law would take effect immediately after midnight. The first marriage ceremonies will happen from 9 January, given couples must give a month’s notice of their intention to wed.”

9. Russia has been banned from the 2018 Winter Olympics. Here’s what to know – Time, Joseph Hincks

Top line: “The International Olympic Committee (IOC) on Tuesday scrubbed Russia’s presence from the 2018 Winter Games in Pyeongchang, South Korea. The nation’s flag will not fly at the opening ceremony, its anthem will not sound at any podium, its medal tally will remain at zero. Even if its athletes compete, they will not do so under the Russian banner. The ban follows a three-year IOC investigation that reaffirmed what has long been suspected: the Russian state has engaged in widespread doping of its athletes at major international sports competitions.”

10. Brexit Deal in Brussels: What Small Print Says and What It Means – Bloomberg, Ian Wishart

Top line: “Theresa May got her Brexit breakthrough, ending six months of negotiations with the European Union. But celebration could be short-lived as the agreement she signed up to contains political booby traps down the line. The technical and legal language of the 15-page document published Friday gives clues as to where conflict may arise between the two sides as they prepare for the next step in talks. Here is our analysis of the three priority issues where the U.K. needed to make “sufficient progress” — how to keep the Irish border open, the U.K.’s financial obligations and the rights of EU citizens living in the U.K. and vice versa.”

~SonaliK is reading 2017: Year in Review