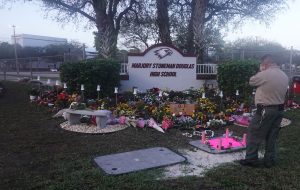 Peter Palmer of the Margate Fire and Rescue CERT chapter wipes away tears at the memorial garden outside of Marjory Stoneman Douglas High School Thursday, Feb. 14, 2019 in Parkland, Fla., on the one year anniversary of the shooting at the school. (Joe Cavaretta/South Florida Sun Sentinel/TNS via Getty Images)

President Donald Trump declared a national emergency in order to secure more federal dollars for his wall at the U.S.-Mexico border. Proposed sources of that money include military construction and anti-drug projects. The move came after Congress approved a funding bill that would avert a second government shutdown, but only offered $1.375 billion for border barriers.

Amazon backed out of plans to build a second headquarters in New York City after mounting opposition by residents, local politicians and union leaders. The company stated it will not seek a replacement city, instead continuing with planned expansions in Arlington, Virginia and Nashville, Tennessee.

Notorious Mexican drug lord Joaquín “El Chapo” Guzmán was convicted on all 10 federal counts against him and will face sentencing on June 25. He faces life in prison.

An ex-Air Force counterintelligence official named Monica Witt was charged by the United States with espionage for allegedly providing classified information to Iran.

Feb. 14 marked one year since the mass shooting at Marjory Stoneman Douglas High School in Parkland, Florida, that killed 17 people. Family, friends and survivors remembered the anniversary with a moment of silence, vigils, community service, art projects and other demonstrations.

Freshman Rep. Ilhan Omar of Minnesota sparked the ire of fellow Democrats and Republicans with tweets accusing U.S. politicians of allowing money and gifts from pro-Israel lobbyists to influence their policy stances regarding the Israeli-Palestinian conflict. Accused of using anti-Semitic stereotypes associating Jewish people with money, Omar apologized to Jewish Americans, but stood by her criticism of political lobbyists.

The U.S. House of Representatives voted to force the withdrawal of U.S. troops from Yemen, where they are supporting Saudi Arabia in their war on the country.

Top line: “Battling with one branch of government and opening a new confrontation with another, President Donald Trump announced Friday he was declaring a national emergency to fulfill his pledge to construct a wall along the U.S.-Mexico border. Bypassing Congress, which approved far less money for his proposed wall than he had sought, Trump said he would use executive action to siphon billions of dollars from federal military construction and counterdrug efforts for the wall, aides said. The move is already drawing bipartisan criticism on Capitol Hill and expected to face rounds of legal challenges. Trump made the announcement from the Rose Garden, as he claimed illegal immigration was “an invasion of our country.” Trump’s move followed a rare show of bipartisanship when lawmakers voted Thursday to fund large swaths of the government and avoid a repeat of this winter’s debilitating five-week government shutdown.” 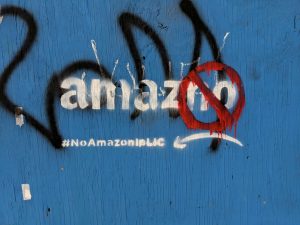 Top line: “Amazon on Thursday canceled its plans to build an expansive corporate campus in New York City after facing an unexpectedly fierce backlash from lawmakers, progressive activists and union leaders, who contended that a tech giant did not deserve nearly $3 billion in government incentives. The decision was an abrupt turnabout by Amazon after a much-publicized search for a second headquarters, which had ended with its announcement in November that it would open two new sites — one in Queens, with more than 25,000 jobs, and another in Virginia. The agreement to lure Amazon to Long Island City, Queens, had stirred intense debate in New York about the use of public subsidies to entice wealthy companies, the rising cost of living in gentrifying neighborhoods, and the city’s very identity.”

Top line: “The Senate voted Thursday to approve William Barr as the next attorney general and successor to Jeff Sessions, who stepped down in November. Now, the pressing question is what the country can expect from its new top law enforcement official: a continuation of Sessions’ hard-line stance on immigration and crime, or a new course? The answer is most likely some of both. Barr, who previously served as attorney general under the first President Bush, has embraced positions on immigration and crime that were also backed by Sessions, a former federal prosecutor and U.S. senator from Alabama. Here’s what we know so far about his views on three key issues.” 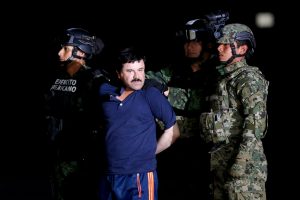 Top line: “Drug lord Joaquin “El Chapo” Guzmán Loera, who once headed a criminal enterprise that spanned continents and triggered waves of bloodshed throughout his native Mexico, was found guilty Tuesday of all 10 federal criminal counts against him. The vast Brooklyn, New York, courtroom fell silent as the verdict was read. Jurors did not look at the defendant, who pocketed nearly $14 billion as the decadeslong head of the murderous Sinaloa cartel. There was no visible reaction from Guzmán, whose conviction on the top charge of engaging in a continuing criminal enterprise carries a mandatory term of life in prison. He will be sentenced on June 25.”

Top line: “A former U.S. Air Force counterintelligence specialist who defected to Iran has been charged with providing classified information to the Islamic Republic, according to an indictment unsealed Wednesday by the Justice Department. Monica Witt, who was born and raised in Texas, allegedly provided Iranian security officials with the code name and classified mission of a U.S. Defense Department special access program. Prosecutors say she also did research to help Iranian authorities target her former co-workers within the American intelligence community. Four Iranian nationals were named in the same indictment with Witt. They face charges including conspiracy, computer intrusions and identity theft targeting Witt’s former colleagues.”

Top line: “A US community devastated by a school shooting one year ago has marked the tragic anniversary with quiet mourning. Seventeen people were shot and killed by an ex-student at Marjory Stoneman Douglas High School (MSD) in Parkland, Florida on 14 February 2018. Students and educators across the country also marked the day with vigils, moments of silence, art projects and other demonstrations. The school mass shooting spurred a renewed effort towards gun control.”

Top line: “House Speaker Nancy Pelosi and the entire Democratic leadership on Monday condemned Rep. Ilhan Omar for suggesting that Israel’s allies in American politics were motivated by money rather than principle, an extraordinary rebuke of a House freshman in the vanguard of the party’s left flank. In response, Omar said her intention was never to offend “my constituents or Jewish Americans as a whole. . . . This is why I unequivocally apologize.” The firestorm exposed deep divisions within the Democratic Party over the unquestioned U.S. support of Israel, pitting long-standing Democratic backers of the Jewish state against the party’s newest lawmakers and several 2020 presidential candidates who have spoken out in favor of Palestinian rights. In a sign of potential clashes, Omar said she would not change her views of the “problematic role of lobbyists in our politics” after the backlash to her tweets. “It’s gone on too long and we must be willing to address it,” she said.””

Top line: “The House easily approved a measure Wednesday that would force the Trump administration to end its military support for the Saudi-led war in Yemen. The vote was a sharp rebuke to Saudi Arabia for its conduct in that conflict and a push-back against the Trump administration’s close ties to the kingdom. The 248-to-177 vote also served as a stinging condemnation for the Saudi government’s role in the murder of Jamal Khashoggi and highlighted the growing appetite in Congress for reasserting itself on foreign policy. Republican opponents of the Yemen resolution said it would give Iran a green light to spread its influence in Yemen and set a dangerous precedent by stretching the War Powers’ definition of military engagement.” 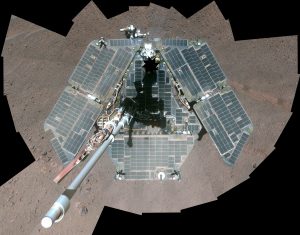 A self-portrait of NASA’s Mars Exploration Rover Opportunity, a combination of multiple frames taken by Opportunity’s panoramic camera (Pancam) during March 22 through March 24, 2014 on planet Mars is seen in this NASA/JPL-Caltech image released on April 17, 2014. (Courtesy NASA/JPL-Caltech/Cornell University/Arizona State University/Handout via REUTERS)

9. The Mars rover Opportunity is dead. Here’s what it gave humankind. – National Geographic,

Top line: “After more than 14 years driving across the surface of Mars, the NASA rover Opportunity has fallen silent—marking the end of a defining mission to another world. At a press conference at the Jet Propulsion Laboratory in Pasadena, California, NASA bid farewell to the rover it placed on Mars on January 25, 2004: before Facebook, before the iPhone, and even before some of the scientists now in charge of it graduated high school. In its record-breaking time on Mars, the rover drove more than 28 miles, finding some of the first definitive signs of past liquid water on the red planet’s surface.”

Top line: “A wire fox terrier named King is America’s top canine after earning the title of best in show on Tuesday night in a Westminster Kennel Club dog show touched by eleventh-hour controversy. The crowd at Madison Square Garden seemed almost taken aback when judge Peter Green revealed his verdict over a pair of overwhelmingly popular favorites: a longhaired dachshund looking to break a centuries-spanning hoodoo and a charismatic Sussex spaniel back in the final ring for the second year in a row.”

~ HeatherC is reading The Art of Optimism by TIME