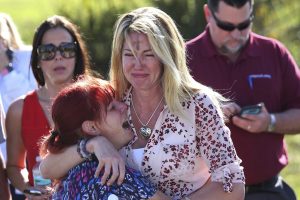 Parents wait for news after a reports of a shooting at Marjory Stoneman Douglas High School in Parkland, Fla., on Wednesday, Feb. 14, 2018. (AP Photo/Joel Auerbach)

Seventeen people lost their lives and at least 14 were injured in a deadly school shooting in Parkland, Florida, this week. Nikolas Cruz, a former student, opened fire at Marjory Stoneman Douglas High School. Cruz was charged with 17 counts of premeditated murder. He confessed to the crime shortly after and is expected to plead guilty.

News broke later in the week that the FBI had received a tip about Cruz but failed to act on the information. Thus, pressure is mounting for the FBI Director Christopher Wray to resign, and Attorney General Jeff Sessions ordered review of DOJ and FBI procedures. President Donald Trump and first lady Melania Trump visited the injured and the first responders Friday.

The White House proposed a $4.4 trillion budget this week, a bipartisan immigration deal failed in Congress and Mitt Romney, the former Republican presidential nominee, announced his bid for the Senate from Utah.

Elsewhere in the world, South Africa’s Jacob Zuma resigned and Cyril Ramaphosa succeeded him as president, a Russian plane crash killed all 71 on board, Israel’s Benjamin Netanyahu was accused of corruption and North Korea invited South Korea to a summit.

Top line: “The Justice Department’s special counsel announced a sweeping indictment Friday of a notorious Russian group of Internet trolls — charging 13 individuals and three companies with a long-running scheme to criminally interfere with the 2016 U.S. presidential election. The indictment charges that the Russian efforts began in 2014, when three of the Russian conspirators visited 10 states, gathering intelligence about U.S. politics. Officials say that as the operation progressed, the suspects also engaged in extensive online conversations with Americans who became unwitting tools of the Russian efforts. The indictment does not accuse the Russian government of involvement in the scheme, nor does it claim that it succeeded in swaying any votes.” 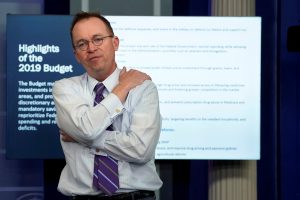 Top line: “President Donald Trump proposed a $4.4 trillion federal budget on Monday for fiscal 2019, a plan Congress is expected to all but ignore that would slash entitlements and other domestic programs in favor of higher spending on the military and immigration enforcement. Trump again asked lawmakers for drastic reductions in environmental, research and diplomatic programs he’s long derided as wasteful: a 27 percent cut to the State Department; 25 percent to the Environmental Protection Agency; cost-cutting overhauls to Medicare and other social safety-net programs. That money would be partially diverted toward building a wall on the Mexican border and boosting defense spending.The Pentagon would see an $80 billion increase in its budget, up 13 percent. Entitlement programs would see a $1.7 trillion cut over a decade, including $237 billion from Medicare.”

Top line: “The Senate left hundreds of thousands of “Dreamer” immigrants in limbo Thursday, rejecting rival plans that would have spared them from deportation and strengthened the nation’s border security. Senators dealt President Donald Trump an especially galling defeat as more than a quarter of fellow Republicans abandoned him on an issue that helped propel him to the White House. Also defeated was a plan by a bipartisan group of senators who offered a compromise that would have shielded the young immigrants and financed Trump’s demands for money to build his coveted border wall with Mexico, though more gradually than he wants. Eight Republicans joined most Democrats in backing that plan, but it fell short after the White House threatened a veto and GOP leaders opposed it.”

Top line: “Mitt Romney will run for U.S. Senate in Utah, hoping to capture the seat of outgoing Republican Sen. Orrin Hatch, who announced his retirement in January. Romney, 70, the Republican presidential candidate in 2012 and the former governor of Massachusetts, made the announcement Friday morning on Twitter. In a two-minute video, he lauds the state for exporting more than it imports and balancing its budget, values and lessons he said belong in Washington. Romney had been rumored to run and Hatch’s departure seemed to have opened the door. Shortly after Hatch announced he wouldn’t seek re-election this fall, Romney’s backers pushed for him to enter the race.”

Top line: “A second federal appeals court ruled on Thursday against President Trump’s latest effort to limit travel from countries said to pose a threat to the nation’s security. The decision, from the United States Court of Appeals for the Fourth Circuit, in Richmond, Va., will have no immediate practical impact. The Supreme Court agreed last month to hear an appeal from a broadly similar decision from the Ninth Circuit, in San Francisco.” 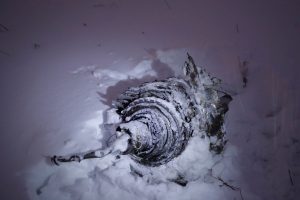 A part of a Saratov Airlines Antonov AN-148 plane that crashed after taking off from Moscow’s Domodedovo airport, is seen at the scene of the incident outside Moscow, Russia February 11, 2018. REUTERS/Maxim Shemetov

Top line: “A Russian passenger plane crashed near Moscow soon after take-off on Sunday, killing all 71 people on board, and investigators said they were looking at all possible causes. Temperatures were around minus 5 degrees Celsius with periodic snowfall when the short-haul AN-148 operated by Saratov Airlines took off for the city of Orsk in Orenburg region, about 900 miles (1,500 km) southeast of the capital. President Vladimir Putin offered condolences to those who had lost relatives and ordered a special investigative commission to be set up. “According to preliminary information, nobody survived,” the Kremlin said in a statement. The office of Russia’s transport prosecutor said all 71 people on board had been killed. Transport Minister Maxim Sokolov confirmed there were no survivors and said DNA tests would be needed to identify the dead.”

Top line: “South Korean President Moon Jae-in has been invited to Pyongyang “at an early date,” officials said on Saturday, potentially setting up the first meeting of Korean leaders in more than 10 years. Any meeting with Kim Jong Un would represent a diplomatic coup for Moon, who swept to power last year on a promise of greater engagement with the reclusive North. The recent detente between the two neighbors, anchored by South Korea’s hosting of the Winter Olympics in PyeongChang, came despite escalating tensions over the North’s weapons program last year and pressure from Seoul’s allies in Washington. The invitation came during talks and a lunch Moon hosted with Kim Yo Jong, the younger sister of the North Korean leader, at the presidential Blue House in Seoul.” 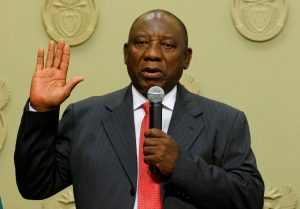 Top line: “Cyril Ramaphosa has become South Africa’s president a day after embattled leader Jacob Zuma resigned. He was the only candidate nominated by parliament, which is dominated by his African National Congress. MPs broke into song at the announcement. In his first presidential speech, Mr Ramaphosa, 65, said he would tackle the corruption which allegedly became widespread under Mr Zuma. The ANC had told Mr Zuma to step down or face a vote of no-confidence. Mr Zuma faces numerous corruption allegations but denies any wrongdoing. One allegation is that he allowed the wealthy Gupta family, to whom he has personal ties, to wield influence over policy, in an example of “state capture.”’

Top line: “Israeli police believe billionaire Hollywood producer Arnon Milchan bribed Israeli Prime Minister Benjamin Netanyahu with expensive cigars and pink champagne in exchange for a series of favors, among other corruption allegations police unveiled this week. Netanyahu denied he did Milchan a single favor — except for one. “The visa,” Netanyahu said. Milchan, whose scores of film credits include Pretty Woman, L.A. Confidential and Fight Club, is an Israeli citizen residing in the United States on a visa. Several years ago, U.S. officials rejected his request for a renewed visa, and Netanyahu lobbied U.S. officials including then-Secretary of State John Kerry to issue it. “Why was it revoked from him? Because very important things were published in the press about what he did in the past on behalf of Israel,” Netanyahu said in a televised address to the Israeli nation.”