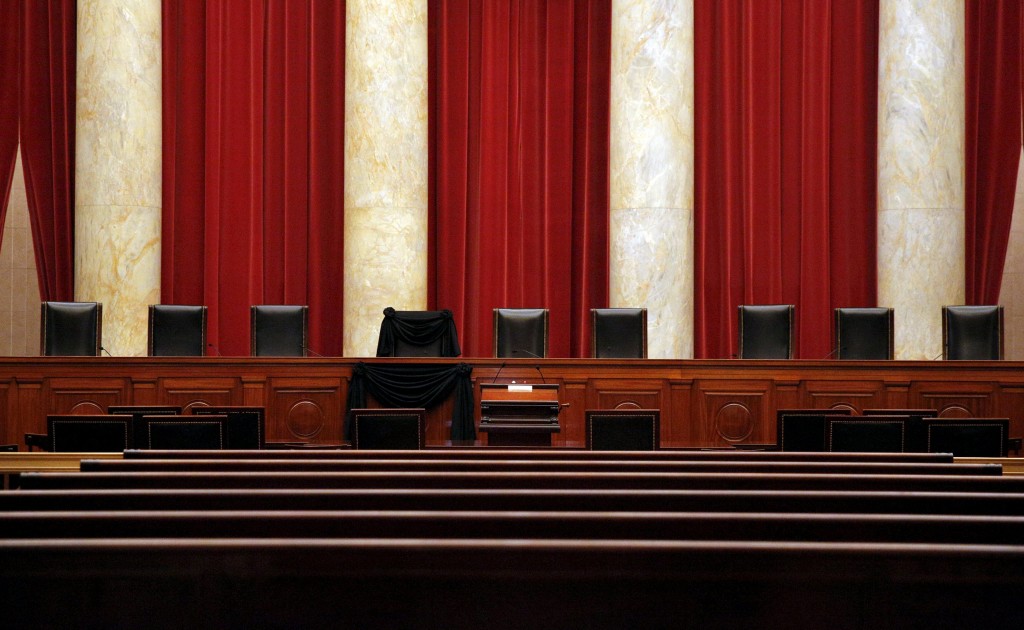 This week began with the passing of Supreme Court Justice Antonin Scalia and ended with the passing of beloved author Harper Lee. In between, Apple went toe-to-toe with the feds over the iPhone of one of the San Bernardino attackers, a deadly bombing took place in Ankara, music’s biggest awards were handed out, George W. Bush returned to the campaign trail and the Pope criticized Donald Trump. Read the biggest news of the week, as it appeared in The Daily Edition.

Top line: “Appointed to the court in 1986 by President Ronald Reagan, Scalia was a conservative icon who transformed the court by instilling in it his belief that judges should follow the precise words of the Constitution and not apply a modern interpretation.

He was the first justice of Italian-American heritage and passed through confirmation with a unanimous vote.

Scalia changed oral arguments as he became an active participant with tough questions for advocates.

He will be best known, perhaps, for his landmark decision District of Columbia v. Heller, holding that the Second Amendment protects the right to posses a firearm at home. He was a critic of Roe v. Wade and dissented in last term’s same-sex marriage cases.”

Top line: “Given that backdrop, here are some possible paths for Mr. Obama to follow, and the likely political consequences of each…Republicans Pay a Price…A Safer Choice…A Dream Candidate for Liberals…Make It Awkward for Republicans…The Srinivasan Scenario.”

Top line: “Turkey has vowed to retaliate against the perpetrators of a powerful blast in the capital Ankara that left at least 28 people dead and 61 injured.”

Top line: “The Justice Department, frustrated by its inability to unlock the iPhone of one of the attackers in the San Bernardino killings, demanded on Friday that a judge immediately order Apple to give it the technical tools to get inside the phone…A blistering open letter this week from Timothy D. Cook, Apple’s chief executive, had rallied many privacy advocates behind the company, and law enforcement officials said that the latest volley from the Justice Department on Friday was meant largely to rebut Mr. Cook’s arguments and buttress the government’s own case.”

Top line: “Donald Trump issued a blistering response to Pope Francis on Thursday, saying it is ‘disgraceful’ for the Catholic leader to question his faith and calling the pontiff ‘a pawn’ for the Mexican government…Moments before Trump’s rally was set to begin, Francis told reporters, ‘A person who only thinks about building walls, wherever they may be, and not building bridges, is not Christian.'”

6. George W. Bush: President shouldn’t be someone ‘who mirrors and inflames our frustration’—CNN, MJ Lee

Top line: “George W. Bush told voters here Monday that ‘we do not need someone in the Oval Office who mirrors and inflames our frustration’ — a clear swipe at Donald Trump during a campaign rally for his brother, Jeb Bush. In his most political speech since he left office in 2009, George W. Bush said voters should choose a candidate who is ‘measured and thoughtful’ over the loudest and angriest man in the room.”

Top line: “U.S. warplanes on Friday bombed an Islamic State training camp in Libya, targeting a top militant linked to two high-profile terror attacks in Tunisia last year, the Pentagon said…The target of the strike was Noureddine Chouchane, who has been identified by the Tunisian government as a suspect in the attack at the Bardo Museum in the Tunisian capital of Tunis, which killed 22 people in March, and an attack in June that killed 38 people in the seaside resort of Sousse.”

8. Cliven Bundy and sons indicted on federal conspiracy charges: ‘A man who will do whatever it takes’—The Washington Post, Justin Wm. Moyer

Top line: “Now, Bundy, two of his 14 children, the radio host, and another self-styled ‘freedom fighter’ have been indicted on a host of federal conspiracy charges related to the standoff at the Bundy ranch two years ago — a standoff that presaged the takeover of a federal wildlife refuge in Oregon last month. The defendants, if convicted, face maximum sentences of 20 years in prison on some of the counts and $2.5 million in fines on charges ranging from extortion to assault on federal officers.”

Top line: “Rapper Kendrick Lamar led the Grammy winners on Monday with five wins but was shut out of the night’s top categories as Taylor Swift nabbed album of the year in an upset victory.”

Top line: “‘To Kill a Mockingbird,’ the classic 1960 novel about racism in a small Southern town, won the Pulitzer Prize for fiction, became a staple of high school reading lists and turned its author into one of American literature’s most revered figures. But fame and its burdens overwhelmed Harper Lee, who wrote one masterpiece, then shut the door on an adoring public. She had hoped for modest approval of her debut work ‘but I got rather a whole lot,’ she once said, ‘and in some ways this was just about as frightening.'”

~GabyS is reading Everything Apple