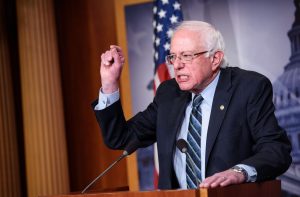 Senator Bernie Sanders, I-VT, speaks after the Senate voted to withdraw support for Saudi Arabia’s war in Yemen, in the Senate TV studio at the US Capitol in Washington, DC on December 13, 2018. (Photo by MANDEL NGAN/AFP/Getty Images)

A coalition of 16 states filed a lawsuit to block President Donald Trump’s move to fund construction of a wall at the southern border via declaring a national emergency.

A Coast Guard lieutenant and former Marine named Christopher Paul Hasson was arrested in Maryland and charged with plotting to commit acts of domestic terrorism against prominent Democrats and journalists.

An investigation into electoral fraud has led to the North Carolina elections board ordering a new election be held for the U.S. House seat in the 9th Congressional District. The move came after a campaign employee for Republican candidate Mark Harris was revealed to have illegally collected and altered absentee ballots in his favor.

In celebrity news, fashion icon Karl Lagerfeld died at the age of 85 after a legendary career as designer and, most recently, creative director for Chanel. Meanwhile, “Empire” star Jussie Smollett was arrested on charges of filing false allegations of a hate crime and is being written out of the show’s current season.

Top line: “After months of deliberation, Vermont Sen. Bernie Sanders announced Tuesday that he is running for president again in 2020. It will be Sanders’ second consecutive bid for the Democratic nomination after losing to Hillary Clinton in 2016. Sanders enters the 2020 race as one of the frontrunners — a remarkable turn for the democratic socialist who, three years ago, was viewed as a protest candidate from the political fringe. Today, Sanders is one of the most popular politicians among Democratic voters and his policy agenda — a suite of progressive proposals to expand health care, broaden the social safety net and make higher education free — has been embraced by many of the Democratic party’s leading figures.”

Top line: “A coalition of 16 states filed suit on Monday to block President Donald Trump’s effort to fund his border wall by declaring a national emergency, calling it a “flagrant disregard of fundamental separation of powers principles.” The complaint, filed in the U.S. District Court for Northern California, is the third in a string of legal challenges already launched against Trump’s use of emergency powers since he announced the move during a meandering White House news conference on Friday. Public Citizen, a liberal advocacy group, filed a suit late Friday in the District of Columbia on behalf of three Texas landowners who would be impacted by the construction of a wall along the border. And Citizens for Responsibility and Ethics has filed a motion against the Department of Justice demanding that the agency provide documents pertaining to the legal justification of the president’s emergency declaration.”

Top line: “A 49-year-old Coast Guard lieutenant charged with stockpiling weapons and drugs is being described as a “domestic terrorist” who was planning “to murder innocent civilians on a scale rarely seen in this country,” according to court documents filed in U.S. District Court in Maryland on Tuesday. Federal prosecutors say Christopher Paul Hasson, a self-described white nationalist living in Silver Spring, Md., was amassing firearms since at least 2017, while cultivating plans to launch a widespread attack on prominent Democratic lawmakers, including House Speaker Nancy Pelosi, and several high-profile television anchors from MSNBC and CNN.”

Top line: “North Carolina’s elections board on Thursday ordered a new election for a U.S. House seat after officials said corruption surrounding absentee ballots tainted the results of a 2018 vote that has embarrassed the Republican Party. The bipartisan board’s 5-0 decision came after Republican candidate Mark Harris, confronted by days of evidence that an operative for his campaign orchestrated a ballot fraud scheme, called for a new vote in the state’s 9th Congressional District. The race is the country’s last unsettled 2018 congressional contest, and the outcome will not change the balance of power in the Democratic-controlled House of Representatives. Harris’ request for a new vote came as a surprise after he spent months trying to fend off a rerun. He led Democrat Dan McCready by 905 votes out of 282,717 ballots cast on Nov. 6, but elections officials refused to certify him the winner because of allegations of irregularities in the vote.” 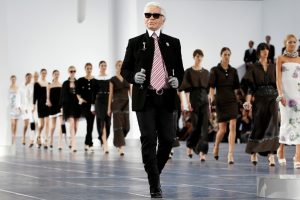 Top line: “Karl Lagerfeld, one of the most prolific and widely popular designers of the 20th and 21st centuries, has died in Paris. He was 85. Lagerfeld was creative director of Chanel, the French house founded by Gabrielle Chanel, for an era-defining, age-defying 36 years. Upon assuming the reins in 1983, Lagerfeld swiftly revived Chanel, reinterpreting the house founder’s iconic tweed skirtsuits, little black dresses, and quilted handbags. He did it via the lens of hip-hop one season and California surfer chicks the next—he was a pop culture savant—without ever forgetting what the revolutionary Coco stood for: independence, freedom, and modernity. In more recent years, as the company’s fortunes grew and grew, Lagerfeld became known for the lavish Grand Palais sets he conceived for the six Chanel collections he designed a year.”

Top line: “The strange case of the “Empire” star Jussie Smollett took another turn Wednesday when prosecutors in Chicago charged him with a felony count of disorderly conduct and said he had filed a false police report after staging his own assault. He was arrested on Thursday morning, the police said. The announcement came after two men — brothers who know Smollett — testified before a grand jury and said they had been paid to help participate in what they described as a phony assault. Smollet’s lawyers have issued a strong statement in which the actor continued to deny any wrongdoing and said he would mount an aggressive defense. Here’s a timeline of how we got here.” 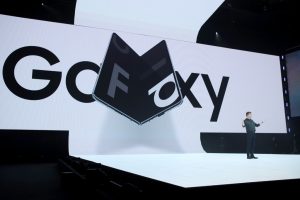 Top line: “Missed today’s Samsung Unpacked event in San Francisco? In all, we have five new phones — one of them a foldable — some new earbuds, a virtual assistant and a watch. Here’s everything you need to know.” 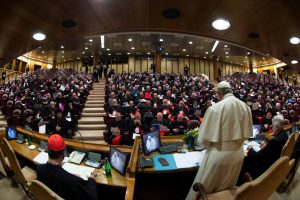 Pope Francis attends the four-day meeting on the global sexual abuse crisis, at the Vatican February 21, 2019. Picture taken with a fish-eye lens. Vatican Media/­Handout via REUTERS ATTENTION EDITORS – THIS IMAGE WAS PROVIDED BY A THIRD PARTY.

Top line: “Pope Francis began charting a new course for the Catholic Church to confront clergy sexual abuse and cover-up, a scandal that has consumed his papacy and threatens the credibility of the Catholic hierarchy at large. Opening a first-ever Vatican summit on preventing abuse, Francis warned 190 bishops and religious superiors on Thursday that their flocks were demanding concrete action, not just words, to punish predator priests and keep children safe. He offered them 21 proposals to consider going forward, some of them obvious and easy to adopt, others requiring new laws. But his main point in summoning the Catholic hierarchy to the Vatican for a four-day tutorial was to impress upon them that clergy sex abuse is not confined to the United States or Ireland, but is a global scourge that requires a concerted, global response.”

Top line: “The Supreme Court ruled unanimously Wednesday that the Constitution’s prohibition on excessive fines applies to state and local governments, limiting their abilities to impose financial penalties and seize property. The decision delighted critics of civil asset forfeiture, who welcomed the ruling as a new weapon in their war against what has been labeled “policing for profit” — the practice of seizing cash, cars and other property from those convicted, or even suspected, of committing a crime.”

Top line: “President Donald Trump selected a top transportation official late Tuesday to replace Deputy Attorney General Rod Rosenstein as the second-in-command of the Justice Department at a time when it is in the midst of multiple criminal investigations that continue to shadow his administration. The nomination of Jeffrey Rosen, the Transportation Department’s deputy secretary, had been rumored since Attorney General William Barr took office earlier this month. If he is confirmed, Rosen will assume a job that has taken on outsize importance over the past two years as Rosenstein both oversaw and protected an investigation into Russian interference in the 2016 election that was under relentless attack from the White House.