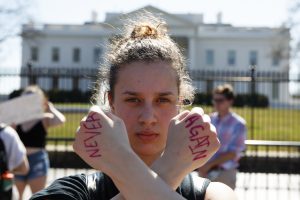 In the wake of last week’s shooting in a Florida high school, scores of students marched against guns and called for an end to gun violence. President Trump floated the idea of arming teachers to increase school safety while meeting survivors and parents at the White House. Speaking at the annual Conservative Political Action Conference (CPAC), NRA chief Wayne LaPierre echoed Trump’s sentiments and called for firearms in schools.

Other notable news included the U.S. announcing the “largest ever” sanctions against North Korea and a plan to move its embassy to Jerusalem in May. The U.N. Security Council struggled to agree on a ceasefire resolution even as at least 500 civilians were killed by Syrian government forces during the week.

Top line: “Scores of students from Florida’s Marjory Stoneman Douglas High School rallied alongside hundreds from other schools Wednesday as their fervent demands for safe schools and an end to gun violence gained momentum across the nation. Students from California to Washington, D.C., held walkouts in solidarity with the teens from Parkland, survivors of last week’s horrific rampage that left 17 people dead and prompted outrage at the National Rifle Association and lawmakers. The energized crowd at the state Capitol waved signs and chanted, “Never again!” and “Shame on you!”’ 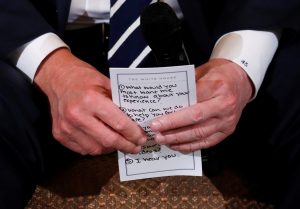 President Donald Trump holds his prepared questions as he hosts a listening session with high school students and teachers to discuss school safety at the White House. REUTERS/Jonathan Ernst

Top line: “President Donald Trump, after listening to a series of emotional stories and pleas to enhance school safety at the White House Wednesday, floated the idea of arming teachers and school staff, an idea that was met with support from many of the attendees. “If you had a teacher who was adept with the firearm, they could end the attack very quickly,” he said, stating that schools could arm up to 20% of their teachers to stop “maniacs” who may try and attack them. “This would be obviously only for people who were very adept at handling a gun, and it would be, it’s called concealed carry, where a teacher would have a concealed gun on them. They’d go for special training and they would be there and you would no longer have a gun-free zone,” Trump said.” 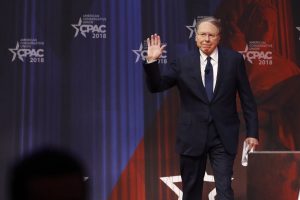 Top line: The head of the National Rifle Association, Wayne LaPierre, leveled a searing indictment on Thursday against liberal Democrats, the news media and political opportunists he said were joined together in a socialist plot to “eradicate all individual freedoms.” “The shameful politicization of tragedy — it’s a classic strategy, right out of the playbook of a poisonous movement,” he said to a friendly but largely restrained crowd at the annual Conservative Political Action Conference. “They hate the N.R.A. They hate the Second Amendment. They hate individual freedom.”’ 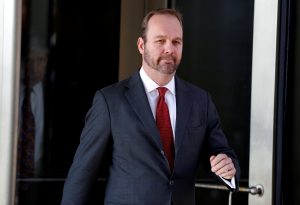 Top line: “Rick Gates, a former Trump campaign aide, pleaded guilty on Friday to felony charges of conspiracy and making false statements as part of a plea bargain hammered out with prosecutors from special counsel Robert Mueller’s office. Gates admitted to taking part in a conspiracy to hide tens of millions of dollars that he and Paul Manafort, the former Trump campaign chairman, obtained for their lobbying and consulting work related to Ukraine. Gates also acknowledged that, during a debriefing with the special counsel’s office and the FBI earlier this month, he lied about the pair’s Ukraine-related work. The plea deal leaves Manafort alone fighting charges in the ongoing Mueller investigation.”

Top line: “President Trump announced new financial measures against North Korea on Friday aimed at ensuring Pyongyang cannot continue to fuel its nuclear ambitions by sidestepping existing sanctions. “Today we put the strongest sanctions on Korea that we have ever put on a country,” Trump said at a news conference with the Australian prime minister. “We must continue to stand together to prevent the brutal dictatorship from threatening the world with nuclear devastation.” The measures target 56 vessels, shipping companies and other entities that U.S. officials say are used by North Korea to conduct trade prohibited under previous sanctions.”

6. U.S. Moving Embassy to Jerusalem by May in a Faster Timetable – Bloomberg, Nick Wadhams

Top line: “The Trump administration will officially move the U.S. embassy in Israel to Jerusalem by May, the State Department said, as the U.S. speeds up the timetable for a decision that has infuriated Palestinian leaders and jeopardized the American role as mediator in the Middle East peace process. Under the new arrangement, signed by Secretary of State Rex Tillerson on Feb. 22 and announced Friday, Ambassador David Friedman and a small group of staff will take up work in an existing U.S. consulate in Jerusalem’s Arnona neighborhood in May, to coincide with the 70th anniversary of Israel’s founding. Expansion of the facility will take place by the end of 2019, the State Department said.”

Top line: “The UN Security Council is struggling to agree a resolution seeking a ceasefire in Syria and has put back a vote until Saturday. The vote has already been delayed several times since Thursday. Russia wanted changes to a draft that calls for a 30-day calm to allow for aid deliveries and medical evacuations. Western diplomats have accused Russia, Syria’s key ally, of stalling for time. France said failure to act may spell the end of the UN itself. Minds have been focused amid outrage at the plight of civilians in the Eastern Ghouta rebel enclave. Activists say 462 people have now been killed there this week. Warplanes maintained the bombardment on Friday, witnesses said. Douma and Hamouriyeh were among areas hit. Western powers suspect that Moscow wants to give Syria time to deal a final blow to forces defending the rebel-held enclave on the edge of Damascus.” 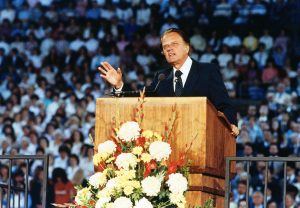 Top line: “U.S. evangelist Billy Graham, who counseled presidents and preached to millions across the world from his native North Carolina to communist North Korea during his 70 years in the pulpit, died on Wednesday at the age of 99, a spokesman said. Graham died at 8 a.m. EST at his home in Montreat, North Carolina, according to Jeremy Blume, a spokesman for the Billy Graham Evangelistic Association. According to his ministry, he preached Christianity to more people than anyone else in history, reaching hundreds of millions of people either in person or via TV and satellite links. Graham became the de facto White House chaplain to several U.S. presidents, most famously Richard Nixon. He also met with scores of world leaders and was the first noted evangelist to take his message behind the Iron Curtain.”

10. Supreme Court gets moving, issuing as many decisions in one day as it has in 5 months – NPR, Nina Totenberg

Top line: “The U.S. Supreme Court began churning out opinions Wednesday, producing four decisions — as many as the justices have produced over the past 4 1/2 months combined. The topics were varied, touching on subjects ranging from gun control to whistleblower protection and terrorism.”