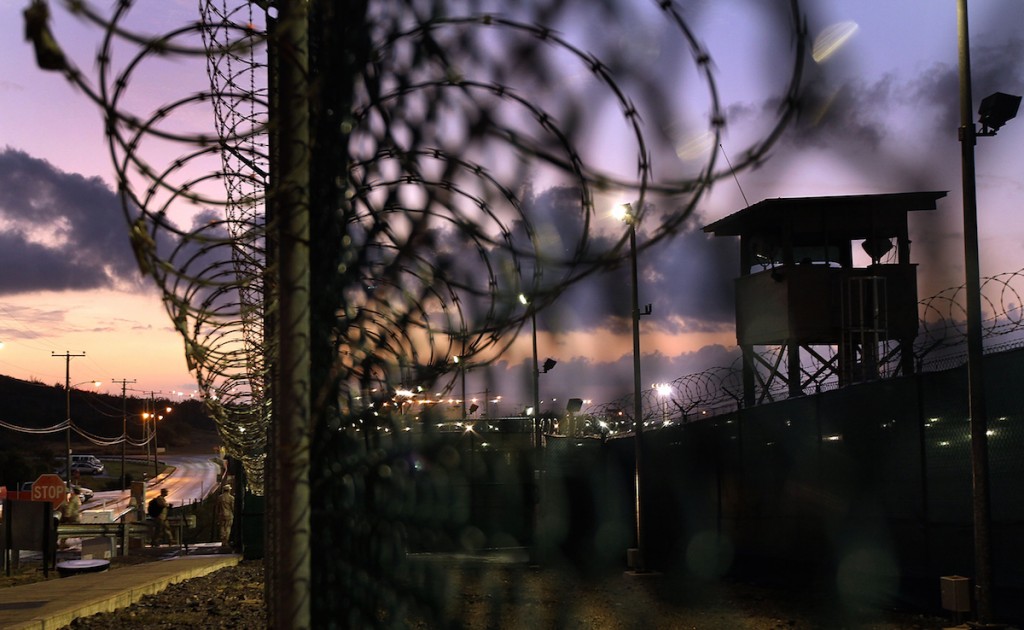 A U.S. military guard arrives for work at Camp Delta in the Guantanamo Bay detention center on March 30, 2010 in Guantanamo Bay, Cuba.

The 2016 presidential election dominated much of the week, between the Republican Nevada caucuses, a Democratic town hall, a Republican presidential debate and Chris Christie’s endorsement of Donald Trump. It was also a week of tragedy, including the Kalamazoo shootings, deadly shooting in Kansas and powerful tornadoes that hit the East Coast and South. Read some of the biggest stories of the week, including the large international stories, as they appeared in this week’s Daily Edition.

Top line: “Donald Trump swept to a convincing victory in the Nevada presidential caucuses here Tuesday evening, building a broad coalition that left his top two rivals trailing far behind and accelerating his march to the Republican nomination.”

Top line: “Dalton admitted ‘that he took people’s lives,’ Kalamazoo police Det. Cory Ghiringhelli told the court…The attacks began outside the Meadows apartment complex on the eastern edge of Kalamazoo County, where a woman was shot multiple times. She survived. A little more than four hours later and 15 miles away, a father and his 17-year-old son were fatally shot while looking at cars at a car dealership. Fifteen minutes after that, five people were gunned down in the parking lot of a Cracker Barrel restaurant. Four of them died. A 14-year-old girl, Abigail Kopf, survived with a head wound and was hospitalized in critical condition.”

Top line: “Senator Marco Rubio, alarmed by Donald J. Trump’s ascendancy and worried that his presidential chances were slipping away, unleashed a barrage of attacks on the real estate mogul’s business ethics, hiring practices and financial achievements in Thursday’s debate, forcefully delivering the onslaught that Republican leaders had desperately awaited.”

Top line: “New Jersey Gov. Chris Christie on Friday announced he was endorsing one-time rival Donald Trump’s presidential campaign…Christie, returning to the campaign trail after ending his own campaign, also took the opportunity to tear into Rubio, who used Thursday night’s debate to unload on Trump over taxes, immigration and his wealth. ‘Desperate people do desperate things,’ Christie said of Rubio, demonstrating his value as a political attacker. Christie said Rubio was suffering through ‘the last days of a losing campaign.'”

5. Kansas gunman kills three at his workplace; 14 others are hurt—Los Angeles Times

Top line: “Gunman armed with an ‘assault-style’ weapon drove through a south-central Kansas town Thursday, taking shots at people, before storming the factory where he worked. Authorities said he killed three people and wounded 14 others before being shot dead by an officer. Harvey County Sheriff T. Walton said at a news conference that all the dead were shot inside Excel Industries, a plant in Hesston that makes lawn mower products. He said 14 people were injured in the shootings, 10 critically.”

Top line: “Another Syria task force meeting will take place Saturday afternoon in Geneva to assess whether the temporary truce is being respected, he said. The cessation of hostilities is the most hopeful sign in years in the nation that’s been torn by civil war. At least 250,000 people have died and at least 1 million people have fled the nation.”

Top line: “A final plan by Barack Obama to fulfill his pledge to close Guantánamo Bay – functionally identical to what he has already proposed – has already run into heavy political opposition, underscoring the likelihood Guantánamo will remain a detention facility after Obama leaves office.

The plan, released on Tuesday in accordance with a congressional request, reiterates previous administration insistences on closing Guantánamo rather than proposing a long-elusive new option with the chance of breaking through more than seven years of GOP refusal on Capitol Hill.”

Top line: “Four people were killed in Virginia on Wednesday…Three were killed in the South on Tuesday…Sixteen tornadoes — eight in Virginia, five in North Carolina and three in Florida — have been reported on the East Coast, according to a preliminary report from the National Weather Service…Fifty-two tornadoes have been reported across the country since Tuesday, according to CNN meteorologist Pedram Javaheri.”

Top line: “The United States and China reached an agreement to impose tougher sanctions against North Korea, in what appeared to be a diplomatic shift by Beijing regarding its intransigent ally…Whether the proposed new sanctions will succeed in curtailing Pyongyang’s nuclear ambitions remains to be seen. Past efforts to halt its nuclear program have not been fully carried out, nor have they prevented North Korea from pursuing a nuclear arsenal. Whether China would follow through on tougher sanctions was also a key question.”