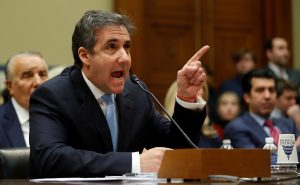 Michael Cohen testifies before a House Committee on Oversight and Reform. (REUTERS/Carlos Barria)

President Donald Trump and North Korean leader Kim Jong Un met for the second time in less than a year, this time in Hanoi, Vietnam. The stated goal was to take steps towards denuclearization and a possible permanent peace on the divided Korean peninsula. However, summit talks abruptly ended midway over terms of U.S. sanctions on North Korea, and both countries blamed the other for the lack of progress. Diplomatic relations continue between the nations and South Korea has stated they will mediate.

Back in the U.S., much of the country was gripped by the multi-day testimony by former Trump lawyer Michael Cohen to Congress about alleged criminality and other wrongdoing by the president both before and after his election.

The Democrat-led House of Representatives voted on major legislation: passing a resolution to nullify Trump’s national emergency declaration and then voting in favor of two gun control bills. The first bill would require universal federal background checks for private firearms sales as well as ones in stores, and the other would extend a 10-day waiting period before purchase. However, all three pieces of legislation face opposition in the Republican-led Senate.

Andrew Wheeler was confirmed by the Senate as permanent chief of the Environmental Protection Agency, where the former coal lobbyist has been serving as acting chief for several months after Scott Pruitt resigned following ethics scandals.

Elsewhere in the world, Israeli Prime Minister Benjamin Netanyahu faces possible criminal indictment on corruption charges, and long-standing tensions between India and Pakistan escalated after both shot the other’s military jets and Pakistan captured an Indian pilot. Pakistan released the pilot on Friday.

In business and entertainment news, HBO CEO Richard Plepler abruptly announced plans to resign after over 28 years at the company amid restructuring under new owner AT&T, the annual MWC debuted the latest in mobile technology, and the 91st annual Academy Awards—aka the Oscars—came and went with many notable wins, speeches and takeaways. 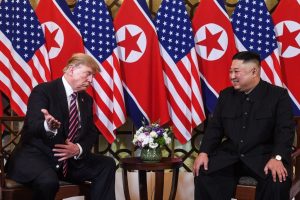 Top line: “The United States and North Korea offered conflicting accounts and traded blame on Thursday after a second summit meeting between President Trump and the North’s leader, Kim Jong-un, ended abruptly without any agreement on nuclear disarmament or easing tensions on the Korean Peninsula. The premature end to the negotiations leaves the unusual rapprochement between the United States and North Korea that has unfolded for most of a year at a deadlock, with the North retaining both its nuclear arsenal and facilities believed to be producing additional fissile material for warheads.”

Magazine to follow: The Taming of North Korea by Bloomberg

Top line: “Michael Cohen’s testimony Wednesday represented the biggest moment to date for House Democrats and their sweeping investigation into every aspect of President Donald Trump’s life. Cohen implicated Trump on numerous fronts, from hush-money payments during the campaign to financial shenanigans at the Trump Organization to orchestrating lies while he was in the Oval Office. And he maligned the President’s character, calling him a “racist” and a “conman.” Republicans and the White House dismissed Cohen, calling him a convicted liar motivated by greed. But the hearing made clear that Cohen’s allegations will be a jumping off point for Democrats to probe deeper into Trump’s world. Here are six takeaways from Cohen’s hearing.”

Top line: “The House on Tuesday passed a resolution to overturn President Trump’s declaration of a national emergency on the southern border, as majority Democrats painted an apocalyptic portrait of a lawless chief executive out to gut the Constitution. The 245-to-182 tally was mostly along party lines, with 13 Republicans defecting to side with Democrats on a vote that effectively became a test of GOP loyalty to Trump. Despite their frequent complaints of executive overreach during the Obama administration, most Republicans fell in line with Trump’s decision to try to circumvent Congress to get billions of dollars for his border wall. As a result, the vote fell well short of the two-thirds majority that would be required to overcome Trump’s threatened veto.”

Top line: “The Democratic-led House Thursday approved another piece of legislation to broaden federal gun-control legislation. The bill gives the FBI more time to do background checks on gun purchasers. It comes a day after the chamber passed a bill extending the checks to private firearms sales. Both measures face long odds at becoming law. The latest bill would extend the time sellers have to wait before completing a gun sale. Like Wednesday’s measure, it passed largely along party lines — 228 to 198. Thursday’s bill seeks to close the so-called “Charleston loophole” that allowed an avowed white supremacist to buy a gun used to kill 9 people at Mother Emanuel AME in Charleston. S.C., in 2015. The Enhanced Background Checks Act of 2019 expands the background check period to ten days, with the potential to be extended another ten.”

Top line: “The Senate on Thursday confirmed former coal industry lobbyist Andrew Wheeler to lead the Environmental Protection Agency, despite concerns by Democrats and one Republican about regulatory rollbacks he’s made in eight months as the agency’s acting chief. Senators voted 52-47 to confirm Wheeler, who was nominated by President Donald Trump after former administrator Scott Pruitt resigned last year amid a series of ethics allegations.”

Top line: “After more than two years of intense investigations, Israel’s attorney general announced Thursday he intends to indict Prime Minister Benjamin Netanyahu on bribery, fraud and breach of trust charges pending a final hearing. The final decision on indictment will only take place after a hearing, where the prime minister can defend himself. That process could take many months and be completed long after the elections. If the decision is formalized it would be the first time a sitting Israeli prime minister has been charged with a crime. Former Prime Minister Ehud Olmert served time in prison for corruption, but had already resigned by the time he was charged.” 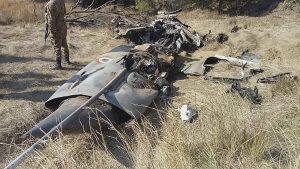 A Pakistani soldier stands guard near the wreckage of an Indian plane shot down by the Pakistan military on Wednesday, in Hurran, near the Line of Control in Pakistani Kashmir, Thursday, Feb. 28, 2019. Prime Minister Imran Khan said Pakistan will release the captured Indian fighter pilot as a “peace gesture” toward India. Khan made this announcement on Thursday while addressing lawmakers in both chambers of Parliament, convened to discuss the latest situation amid rising tensions with the nuclear-armed neighbor over the disputed territory of Kashmir. (AP Photo/Abdul Razzaq)

Top line: “Pakistan has handed back an Indian pilot who has become the face of the worst military crisis between the two countries in decades in a gesture aimed at demonstrating its willingness to de-escalate the conflict. Wing commander Abhinandan Varthaman, who was shot down during the first publicly acknowledged dogfight between the two countries in 48 years on Wednesday, was returned to India on Friday evening at the Wagah border crossing in Punjab. Imran Khan, Pakistan’s prime minister, had announced his impending release in parliament on Thursday, calling it a “peace gesture”.”

Top line: “HBO CEO Richard Plepler is out amid a broad restructuring of the company under new parent AT&T, according to an internal memo obtained by CNBC. Plepler had been at HBO for nearly three decades and led the company as it became one of the market leaders in streaming video on demand. AT&T’s purchase of Time Warner earlier this year spurred reports of a culture clash between the telecom giant and its newly acquired media assets. Shortly after the merger closed, media reports pitted the head of the newly named Warner Media, John Stankey, against HBO incumbents, saying Stankey was angling for larger content volume out of the company.” 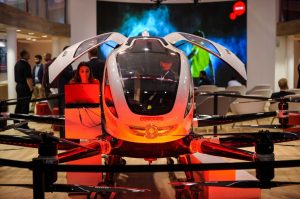 Top line: “It’s not the best of times to buy a phone, and that’s because we’re absolutely swamped with new ones. Lots of phones. Flagship phones. 5G phones. A few more foldable phones if we’re lucky. That’s because it’s MWC 2019, this year’s edition of the annual phone show formerly known as Mobile World Congress. Now we’ve had most of the official press conferences, we’ve seen new folding phones from Samsung and Huawei, a phone with five cameras from Nokia and the HoloLens 2 from Microsoft. Read on for a breakdown of what we’ve so far.” 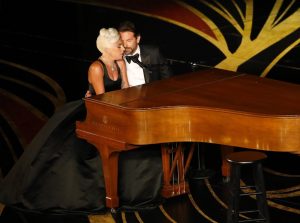 Lady Gaga and Bradley Cooper perform ‘Shallow’ from ‘A Star Is Born.’ She won for best original song. (REUTERS/Mike Blake)

Top line: “Well, we’ll say one thing for this year’s Oscars: They were pretty quick — like ripping-off-a-Band-Aid kind of quick. But is anything truly painless in the year of our Lord 2019? For the first time in 30 years, the Academy Awards ceremony found itself sans emcee after intended host Kevin Hart stepped down in a storm of controversy earlier this winter. The lack of host made for a swifter night by far — the credits ran well before midnight — but it also made for a ceremony that felt a little disjointed and incoherent. Still, Oscars night was far from all bad. Read on for our rundown of the best, worst and WTFs of the 91st Annual Academy Awards.”

~ HeatherC is reading Life Advice by The Jackal