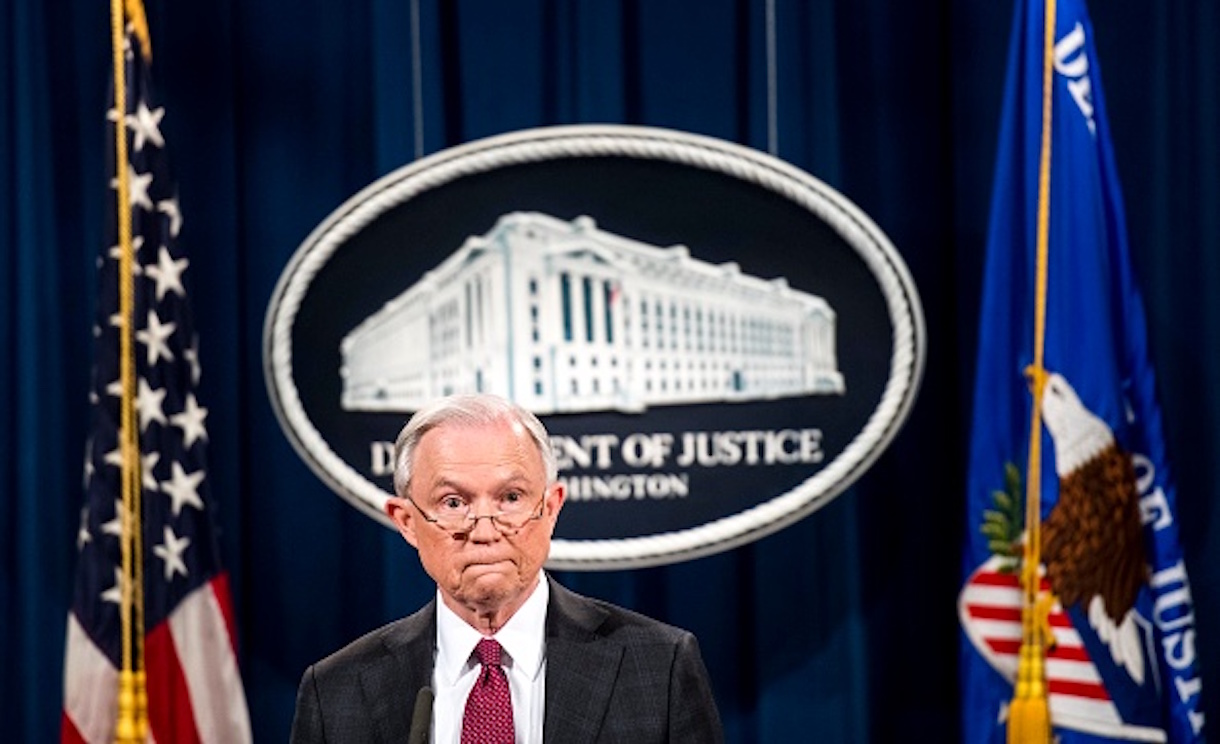 WASHINGTON, DC – Attorney General Jeff Sessions recused himself from the investigation into Russian influence in the 2016 campaign during a Department of Justice press conference in Washington, DC Thursday March 2, 2017. (Photo by Melina Mara/The Washington Post via Getty Images)

Attorney General Jeff Sessions recused himself from investigations into Russian interference in the 2016 election Thursday, after news that the former Alabama senator failed to disclose an alleged meeting with a Russian envoy last year.

Two women accused of killing the half brother of North Korean leader Kim Jong-un were charged with murder. The pair face the death penalty if found guilty of putting the deadly nerve agent VX onto Kim Jong-nam’s face.

President Donald Trump addressed Congress for the first time and hosted his first Governor’s Ball. Wilbur Ross was sworn in as secretary of commerce and Navy secretary nominee Philip Bilden withdrew from consideration.

In Hollywood, the world watched on in shock as the incorrect winner of the Oscar’s Best Picture award was announced. Warren Beatty and Faye Dunaway named La La Land instead of Moonlight after a mix-up with the envelopes.

Top line: “Insisting again that he had no improper contacts with the Russians, Sessions said he nevertheless will withdraw because of his involvement in the Trump campaign.”

Top line: “President Trump, in his first address to a joint session of Congress, defended his tumultuous presidency on Tuesday and said he was eager to reach across party lines and put aside ‘trivial fights’ to help ordinary Americans.”

Top line: “Pointing to the meetings with governors slated for the next day, Trump said Obamacare has ‘tremendous problems’ and needed to be repealed and replaced, which he said would be one topic among others at the ‘pretty big sessions’ they would have. ‘I think you’re going to see something very special,’ Trump said.”

6. Wilbur Ross sworn in as secretary of commerce—Reuters

Top line: “Philadelphia police say approximately 100 headstones have been damaged at a Jewish cemetery in the northeastern part of the city. The vandalism occurred less than a week after a similar episode in a Jewish cemetery near St. Louis, where more than 150 graves were targeted.”

9. Snap starts trading at $24, up 41% from IPO price—VentureBeat, Harrison Weber

Top line: “Snap, the company that runs Snapchat, opened on the New York Stock Exchange this morning (Thursday) at $24 per share. At that price, the company had a valuation of $33.6 billion, Investors Business Daily reported. There was a large volume of shares being traded — more than 105 million, in fact.”

Top line: “It will be a private mission with two paying customers, not NASA astronauts, who approached the company. The passengers are ‘very serious’ about the trip and have already paid a ‘significant deposit,’ according to Musk. The trip around the Moon would take approximately one week: it would skim the surface of the Moon, go further out into deep space, and loop back to Earth — reaching a distance of approximately 300,000 to 400,000 miles.”