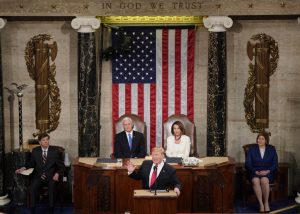 President Trump delivers his second State of the Union address to a joint session of Congress. (REUTERS/Joshua Roberts)

President Donald Trump delivered the third-longest State of the Union address to Congress and a live national audience, using the platform to talk about a wide range of issues, including bipartisanship, immigration, abortion and a second summit with North Korean leader Kim Jong Un for late February in Vietnam.

Former Georgia gubernatorial candidate Stacey Abrams gave the Democratic Party’s rebuttal to the president’s speech, becoming the first black woman in U.S. history to do so.

Virginia politics captivated the nation as the state’s top three leaders became embroiled in a ballooning scandal over blackface and allegations of sexual assault. Next door in Washington, D.C., Trump nominated former lobbyist and acting secretary of the Interior Department David Bernhardt to lead the agency permanently.

Pope Francis also spoke on sexual abuse, acknowledging for the first time that such abuse occurred against nuns by members of the clergy.

Major League Baseball said goodbye to one of its greatest players, Frank Robinson, who was also the league’s first African-American manager. Robinson died at the age of 83.

Top line: “President Trump delivered a wide-ranging State of the Union address Tuesday night that went an hour and 21 minutes. That’s the third-longest ever. So what should we make of Trump’s third address to Congress, and in a year when Democrats are gearing up for a crowded primary to decide who will face Trump in 2020?” 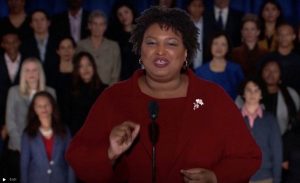 Top line: “Democratic Party rising star Stacey Abrams sharply criticized the Trump administration and Republican leadership on Tuesday night in her response to the President’s State of the Union address. Abrams blamed the President for the recent partial government shutdown, which became the longest in US history, calling it “a stunt engineered by the President,” and argued that the aspirations of American families “are being crushed by Republican leadership that ignores real life or just doesn’t understand it.” The 45-year-old narrowly lost a gubernatorial bid in the reliably red state of Georgia last fall, but rose to national prominence in the process. She made history as the first black woman to give the Democratic response to the State of the Union.”

3. Second Trump and Kim summit to be held in Vietnam within weeks – The Guardian, Julian Borger, Justin McCurry

Top line: “Donald Trump and Kim Jong-un are to hold their second summit in Vietnam at the end of February, the US president has confirmed. In his State of the Union address to Congress, Trump said: “As part of a bold new diplomacy, we continue our historic push for peace on the Korean peninsula.” And he repeated an earlier claim to have averted a major conflict through his Korean diplomacy – a mixture of engagement, economic sanctions and threats of military action. The president did not name a precise venue. According to CNN, the two cities under consideration are Hanoi and Da Nang. South Korea, which has seen an improvement in relations with North Korea under its liberal president, Moon Jae-in, welcomed Trump’s announcement.” 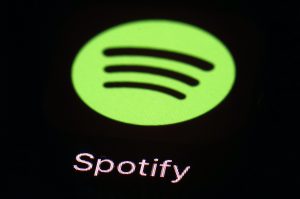 Top line: “When Spotify began more than 10 years ago, it had a simple goal: to establish itself as a force in the music business by making millions of songs instantly available to listeners worldwide. But with its announcement on Wednesday that it had acquired two podcast companies, the streaming service sent a strong signal that it has broader ambitions. No longer does it aim to be a go-to destination for just music fans. It now sees itself as a provider of online audio, period. In announcing its fourth-quarter earnings, the Stockholm company said it had acquired Gimlet Media, the studio behind the popular podcasts “Crimetown,” “Reply All” and “StartUp,” and Anchor, which makes tools for recording and distributing podcasts. Financial terms of the transactions were not disclosed.”

Top line: “Slack, the provider of workplace communication and collaboration tools, has submitted paperwork with the Securities and Exchange Commission to go public later this year, the company announced on Monday. This is its first concrete step toward becoming a publicly listed company, five years after it launched. Headquartered in San Francisco, Slack has raised more than $1 billion in venture capital investment, including a $427 million funding round in August. The round valued the business at $7.1 billion, cementing its position as one of the most valuable privately held businesses in the U.S. The company counted 10 million daily active users around the world and 85,000 paying users as of January 2019.” 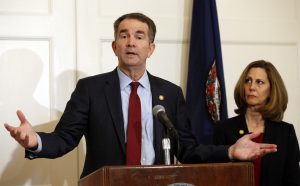 In this Feb. 2, 2019, photo, Virginia Gov. Ralph Northam, left, accompanied by his wife, Pam, speaks during a news conference in the governor’s mansion in Richmond, Va. Democrats are hoping there’s a silver lining to the Northam mess – that it shows they won’t tolerate racism. Every level of the party has condemned the Democratic Virginia governor and demanded he step down. That follows disclosure that his medical school yearbook page features photos of a man in blackface standing with someone dressed in Klu Klux Klan attire.(AP Photo/Steve Helber)

Top line: “With Virginia’s top three elected officials engulfed in scandal, fellow Democrats were rendered practically speechless, uncertain of how to thread their way through the racial and sexual allegations and their tangled political implications. Gov. Ralph Northam’s career was already hanging by a thread over a racist photo in his 1984 medical school yearbook when a woman publicly accused the lieutenant governor of sexually assaulting her 15 years ago, and then the attorney general admitted that he too wore blackface once, as a teenager. The string of scandals that began when the yearbook picture came to light last Friday could have a domino effect on Virginia state government: If all three top Democrats fall, House Speaker Kirk Cox, a conservative Republican, would command the state.

Top line: “President Trump tweeted Monday that he will nominate David Bernhardt, a veteran lobbyist who has helped orchestrate the push to expand oil and gas drilling at the Interior Department, to serve as its next secretary. If confirmed, Bernhardt, a 49-year-old Colorado native known for his unrelenting work habits, would be well positioned to roll back even more of the Obama-era conservation policies he has worked to unravel since rejoining Interior a year and a half ago. He has helmed the department as acting secretary since Jan. 2, when Ryan Zinke resigned amid multiple ethics probes. While Zinke reveled in public displays of his affinity for the outdoors — riding horseback while on the job and touting his enthusiasm for hunting — Bernhardt is the ultimate insider. A former Capitol Hill staffer who served as Interior’s top lawyer under George W. Bush, Bernhardt has made it his mission to master legal and policy arcana to advance conservative policy goals.”

Top line: “Amazon founder Jeff Bezos is firing back at National Enquirer owner American Media Inc. (AMI) over what he is calling an “extortion and blackmail” attempt by the tabloid. In a lengthy post on Medium Thursday, Bezos, who also owns The Washington Post and is also the world’s richest person, details alleged correspondence between the lawyer for his lead investigator, Martin Singer, and Dylan Howard, the chief content officer for AMI.  In emails posted by Bezos, Howard says the Enquirer would post a series of images it has of Bezos and former Los Angeles news anchor Lauren Sanchez, the Amazon founder’s love interest. In a separate email, AMI attorney Jon Fine said that the company would not publish the unreleased emails and text if Bezos released a statement “affirming that they have no knowledge or basis for suggesting that AM’s coverage was politically motivated or influenced by political forces.” The emails also demanded Bezos and his investigator agree that they would stop “referring to such a possibility.””

Top line: “Pope Francis for the first time publicly acknowledged that nuns have also been the victims of sexual abuse at the hands of predator priests and bishops. Vowing to do more to protect vulnerable nuns, the pontiff also credited his predecessor, Pope Benedict, with taking action against a French-based order after some of its nuns were subjected to “sexual slavery.” Francis said some clerics have been suspended for abusing nuns. But he said the mistreatment of women is not limited to the church because in many parts of the world, they are still considered “second-class citizens.” “It’s a cultural problem,” he said. “I dare say that humanity hasn’t matured.”” 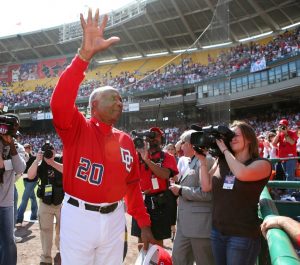 Washington Nationals Manager Frank Robinson waves to the fans on his last day as the Nationals manager, Oct. 1, 2006. (REUTERS/Joshua Roberts)

Top line: “Frank Robinson, who in 1975 became Major League Baseball’s first African-American manager and is considered one of the game’s greatest players, died on Thursday at the age of 83. Robinson, known also for his leadership and competitive fire during a Hall of Fame playing career that spanned 21 seasons, will be remembered as a pioneer by the baseball world after paving the way for every minority manager who has followed. The MLB website said Robinson, who died at his California home, had been suffering from a long-term illness.”