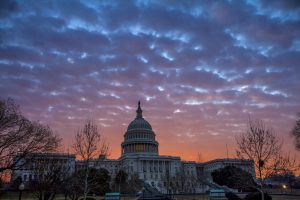 Dawn breaks over the Capitol in Washington, Tuesday, Feb. 6, 2018, as House GOP leaders are proposing to keep the government open for another six weeks by adding a year’s worth of Pentagon funding to a stopgap spending bill. But Senate Democratic leader Chuck Schumer says that approach, fully funding the Defense Department but only providing temporary money for the rest of the government, won’t go anywhere. (AP Photo/J. Scott Applewhite)

The U.S. government briefly shut down for the second time in three weeks when lawmakers missed the deadline to reach a budget deal Thursday. However, the shut down was short-lived. President Trump signed the two-year spending bill in the early hours of the morning.

In the world of business, it was a volatile week for stocks as the Dow plunged more than 1,000 points. It rebounded more than 300 points Friday but still posted worst week in two years.

Also in the news, Elon Musk made history Tuesday when SpaceX launched the Falcon Heavy rocket with a Tesla inside. And in a surprise move, Uber and Waymo settled their trade secrets lawsuit over driverless cars for $245 million.

Top line: “After a temporary lapse in government funding that lasted through the night, Congress passed a pricey two-year spending deal early Friday that will also fund the government for an additional six weeks. The government temporarily closed after Congress failed to pass a government funding bill before a midnight deadline due to the objections of one senator, shutting down non-essential government services. In the end, a bipartisan cohort of lawmakers supported the $400 billion agreement. Shortly after 1:30 a.m. ET, the Senate voted, 71-28, to approve a two-year spending bill that would reopen the government, and the House passed it at 5:30 a.m. with the support of 240 members.”

Top line: “Citing national security concerns, the White House on Friday formally notified the House intelligence committee that President Donald Trump is “unable” to declassify a memo drafted by Democrats that counters GOP allegations about abuse of government surveillance powers in the FBI’s Russia probe. White House counsel Don McGahn said in a letter to the committee that the memo contains “numerous properly classified and especially sensitive passages” and asked the intelligence panel to revise the memo with the help of the Justice Department. He said Trump is still “inclined” to release the memo in the interest of transparency if revisions are made.”

Top line: “An Amtrak passenger train was mistakenly diverted to a side track and crashed into an unmanned freight train in South Carolina, killing two Amtrak employees and injuring 116 people, federal officials said. Amtrak Train 91 was traveling south early Sunday and should have continued straight down the tracks, but the rail switch had been manually set to divert the train onto the rack where the CSX train was parked, National Transportation Safety Board Chairman Robert Sumwalt said at a news conference. A padlock held the switch in its alignment, which is standard procedure when switches are manually operated, Sumwalt said. “Key to that investigation is learning why that switch was lined (aligned) that way,” he said.”

Top line: “Porter’s first wife, Colbie Holderness, alleged in an interview published Wednesday by the Daily Mail that he kicked her on their honeymoon, progressing to choking and punching her in the face. She provided pictures that were published with the story. Porter’s second wife, Jennifer Willoughby, told the Daily Mail earlier this week that he pulled her naked from the shower shortly after their first anniversary, and that he was verbally abusive. The Daily Mail also obtained a police complaint from 2010 of Porter allegedly punching the glass on a door at their home, which led to her filing a temporary protective order.” 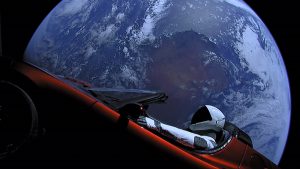 IN SPACE – FEBRUARY 8: In this handout photo provided by SpaceX, a Tesla roadster launched from the Falcon Heavy rocket with a dummy driver named “Starman” heads towards Mars. (Photo by SpaceX via Getty Images)

Top line: “The launch of this turbocharged version of the workhorse Falcon 9 rocket, which has been carrying cargo to space for years, marks an important milestone in spaceflight, the first time a rocket this powerful has been sent into space by a private company rather than a government space agency. The rocket carried a playful payload: Mr. Musk’s red Roadster, an electric sports car built by his other company, Tesla. Strapped inside the car is a mannequin wearing one of SpaceX’s spacesuits. They are expected to orbit the sun for hundreds of millions of years. “It’s kind of silly and fun, but silly and fun things are important,” Mr. Musk said.” 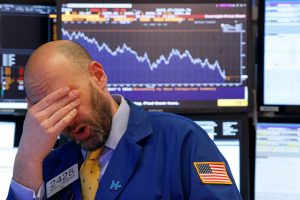 A trader reacts near the end of the day on the floor of the New York Stock Exchange in New York, U.S., February 8, 2018. REUTERS/Brendan Mcdermid

6. Another Rout In The Stock Market, As Dow Drops More Than 1,000 Points – NPR, John Ydstie

Top line: “U.S. stock markets fell sharply Thursday, with the Dow Jones industrial average tumbling 1,033 points, or 4 percent, to 23,860. Other major stock indexes also dropped Thursday. The S&P 500 fell 101 points, or 3.8 percent, and the Nasdaq index fell 275 points, or 3.9 percent. With the latest drops, both the Dow and the broader S&P 500 are down more than 10 percent from their peaks on Jan. 26, which constitutes a market correction. The market is still trying to find its footing after Monday’s huge meltdown, when the Dow fell 1,175 points — a one-day record. Wall Street has been on a roller coaster ride. On Tuesday, the market regained close to half of its deep Monday loss, but on Wednesday the market ended down again. At Thursday’s opening bell, it bounced from positive to negative, then headed down sharply.”

Top line: “A billion-dollar decision against Uber—once a possible outcome for this lawsuit—could have crippled the company’s ambitions; multiple employees testified during the trial’s first few days that the ride-hail company believes it needs to develop autonomous vehicle tech to survive. The suit ends instead with what looks like an amicable détente, with heavy dose of Uber contrition thrown in for good measure. The ridehail company has committed to a legally binding agreement that they will not use Waymo hardware or software intellectual property in their own self-driving car technology. (This lawsuit only concerned the hardware, lidar-focused portion of Waymo’s trade secret theft allegations; another trial, on software, was meant to come later.) Uber will also pay to Waymo a settlement of 0.34 percent of Uber equity, valued at approximately $245 million. That gives Waymo a fair bit of stake in its putative autonomous vehicle tech competitor.”

Top line: “Syria has accused the US of carrying out a “brutal massacre” with a bombing attack in Deir al-Zour province. The overnight air and artillery strikes killed an estimated 100 pro-government fighters near the Euphrates river, according to the US. It claimed a right to self-defence, saying it was responding to an attack on its coalition forces. The Pentagon said Russian mercenaries were also killed, but Russia denies having personnel in the area. The strikes happened in the Middle Euphrates Valley, which serves as an informal demarcation line in eastern Syria. The government controls the western side and the US-backed Syrian Democratic Forces (SDF) the east.”

Top line: “Scores of aftershocks hampered rescue efforts on Thursday as emergency personnel combed through collapsed buildings in search of survivors after a powerful earthquake killed at least 10 people near Taiwan’s tourist city of Hualien. The coastal city was hit on Tuesday by a magnitude 6.4 quake just before midnight (11.00 a.m ET) that injured 270 people. Four buildings collapsed, officials said, and seven people were still missing. Rescuers stepped up efforts at one of the worst-hit structures, a 12-storey building that housed apartments and a small hotel, where authorities believe most of those still missing to have been, including several foreigners.”