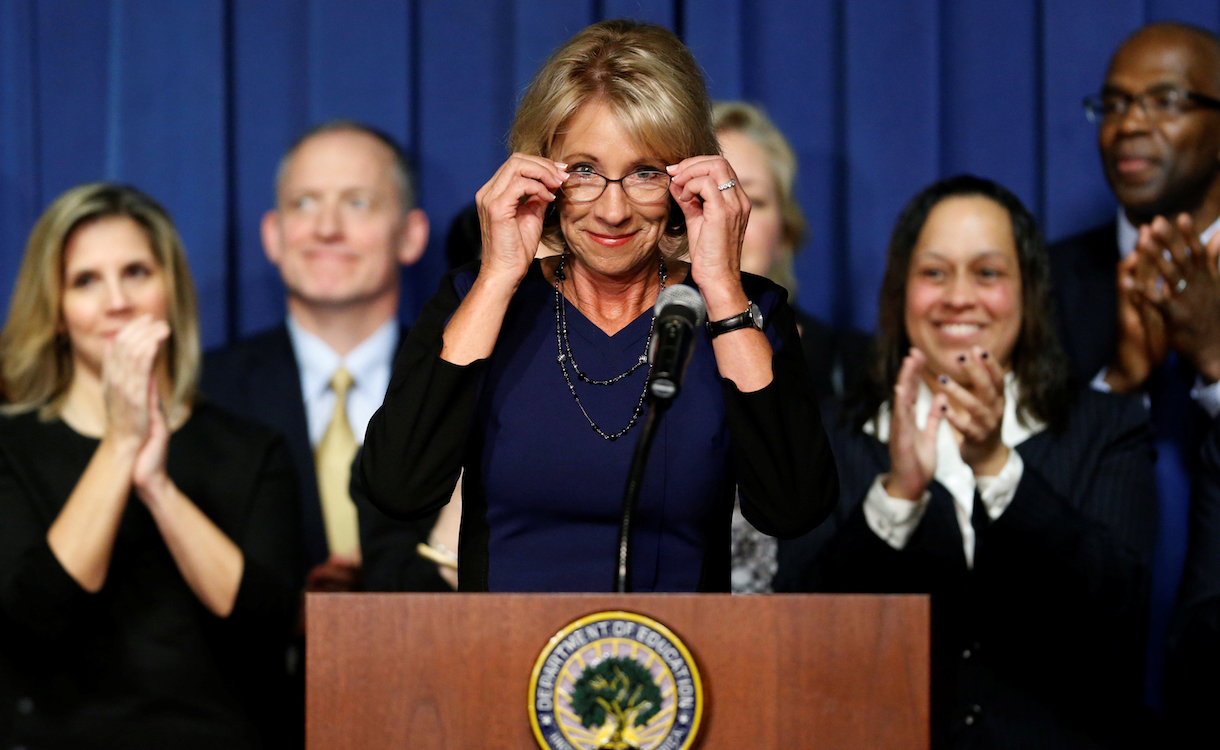 U.S. Education Secretary Betsy DeVos concludes her remarks to Education Department staff on her first day on the job in Washington, U.S., February 8, 2017. REUTERS/Jonathan Ernst TPX IMAGES OF THE DAY

The president responded to the ruling on Twitter, saying: “See you in court, the security of our nation is at stake!”

Earlier in the week Trump told a Fox News interviewer that he respected Russian President Vladimir Putin despite him being an alleged “killer.” He seemed to compare the U.S. with Russia when defending his viewpoint, telling Fox News’ Bill O’Reilly, “What, you think our country’s so innocent?”

Senator Elizabeth Warren was silenced by Republicans Tuesday for reading from a 30-year-old letter written by Martin Luther King’s widow Coretta Scott King. They argued Warren broke Senate rules as she read the letter that criticized attorney general nominee Jeff Sessions‘ civil rights record. Democrats offered their support to Warren, with many taking to social media to express their dismay at Republicans.

Also in Congress on Tuesday, Betsy DeVos was confirmed as Education Secretary after Vice President Mike Pence cast a historic tie-breaking vote, leading to a 51-50 majority.

Top line: “In a unanimous 29-page opinion, three judges from the U.S. Court of Appeals for the 9th Circuit flatly rejected the government’s argument that suspension of the order should be lifted immediately for national security reasons, and they forcefully asserted their ability to serve as a check on the president’s power.”

Top line: “Mr. Trump has long expressed his admiration for the Russian leader’s strength. But his willingness to seemingly draw a moral equivalence to actions by Mr. Putin, who has brutally suppressed dissent by eliminating political enemies, led to an eruption on social media.”

Top line: “Senate Republicans voted to rebuke Warren after she read from a letter that Coretta Scott King wrote criticizing Sessions, a Republican senator from Alabama, who was confirmed Wednesday night as attorney general. The 1986 letter, written when Sessions — then the U.S. attorney for the Southern District of Alabama — was being considered for a federal judgeship.”

Top line: “The 59-year-old philanthropist and activist from Michigan takes over the leadership and management of a federal bureaucracy with 4,400 employees and a $68 billion annual budget.”

Top line: “The series of avalanches over the weekend destroyed dozens of homes and killed livestock, mostly in central and northern provinces. Unusually, snow also fell in the southern province of Kandahar. The updated tolls from Nuristan and Badakhshan brought the number of deaths across the country to at least 137 by Monday, though authorities were due to update the figures later.”

Top line: “For the first time, a Super Bowl needed overtime, and for the fifth time, the New England Patriots are Super Bowl champions. This time, it took the biggest comeback in Super Bowl history to do it, rallying from a 25-point deficit and defeating the Atlanta Falcons 34-28 at NRG Stadium in Houston in Super Bowl LI.”

Top line: “The Syrian government executed up to 13,000 prisoners in mass hangings and carried out systematic torture at a military jail near Damascus, rights watchdog Amnesty International said on Tuesday.”

Top line: “New Orleans Mayor Mitch Landrieu said in a news release Wednesday that two people remain hospitalized, and that 78 people spent Tuesday night in a shelter, which remains open. His statement also said that two-thirds of the 10,400 Entergy customers who lost power have had their electricity restored — and the rest may have to wait up to 5 days before getting their lights back on.”

~JessE is reading Everything Design