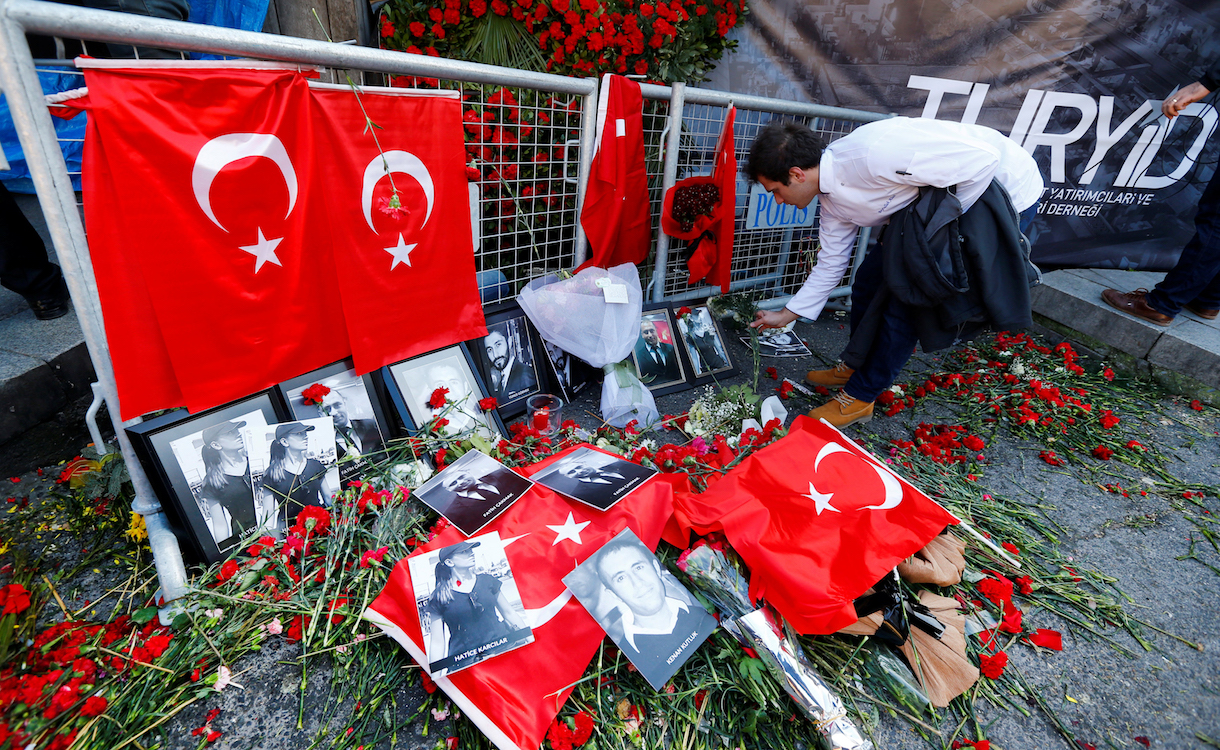 A man places flowers at the entrance of Reina nightclub, which was attacked by a gunman, in Istanbul, Turkey January 3, 2017. REUTERS/Murad Sezer TPX IMAGES OF THE DAY

A gunman opened fire in a busy Turkish nightclub on New Year’s Eve, killing 39 and injuring 69. ISIS claimed responsibility for the attack, in the Turkish city of Istanbul. Authorities are still searching for the suspected assailant after announcing Wednesday they had identified him but were not releasing more details.

The 115th Congress was sworn in Tuesday. Republicans took control of the House and Senate and Republican congressman Paul Ryan was re-elected House speaker.

Later in the week the Senate Armed Services Committee held a hearing on Russian cyber attacks during the presidential election. U.S. intelligence officials told senators Thursday that they are confident Russia attempted to use cyberattacks to influence the election, despite President-elect Donald Trump’s skepticism.

Top Line: “Turkish authorities have identified the gunman who fatally shot dozens of revelers at a nightclub in Istanbul on New Year’s, Turkey’s top diplomat said Wednesday, as police stepped up raids on suspected militant hideouts in a hunt for the attacker.”

2. A New Congress Is Sworn In, but With Many Old Faces—The New York Times, Emmarie Huetteman

Top line: “For many members, opening day was something more akin to Take Your Children to Work Day. Wide-eyed children sat in the chamber, sometimes two to a seat, their patent-leather-clad feet dangling as their parents cast votes for House speaker. Representative Markwayne Mullin, Republican of Oklahoma, gingerly led his young twin daughters — dressed identically, down to the braids in their hair — by the hand as they left the House chamber.”

Top line: “The suspected gunman who shot and killed five people at a Florida airport with a weapon collected from his checked baggage was reportedly an Iraq war veteran known to the US authorities.”

Top line: “Paul Ryan was easily re-elected Speaker of the House of the 115th Congress, following a vote in the chamber Tuesday. Only one Republican member defected — Kentucky Republican Rep. Tom Massie, who is a frequent critic of the speaker, voted for Rep. Daniel Webster.”

Top line: “Ford Motor Co on Tuesday scrapped a planned Mexican car factory and added 700 jobs in Michigan following criticism by Donald Trump, as the U.S. president-elect turned his attention toward rival General Motors Co with the threat of a “big border tax” over compact cars made in Mexico.”

Top line: “Donald Trump and Republican congressional leaders continued to insist Wednesday that their plan to dismantle Obamacare remains on a fast track with Trump poised to act on his first day in office in a little more than two weeks.”

8. Dylann Roof Tells Jury: ‘There Is Nothing Wrong With Me Psychologically’—NBC News, Gabe Gutierrez, Bianca Seward and Jon Schuppe

Top line: “Speaking in public for the first time about the massacre of nine people at a South Carolina church, avowed white supremacist Dylann Roof tried to assure jurors on Wednesday that “there is nothing wrong with me psychologically.” He said that was his motivation for mounting his own defense in the penalty phase of his trial.”

Top line: “US intelligence has identified the go-betweens the Russians used to provide stolen emails to WikiLeaks, according to US officials familiar with the classified intelligence report that was presented to President Barack Obama on Thursday.”