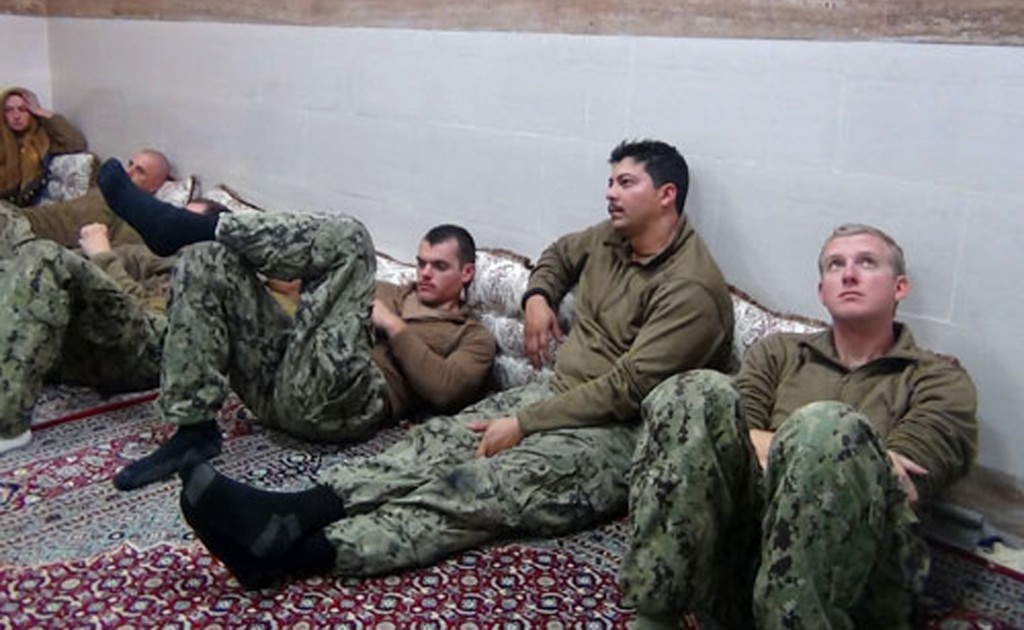 This picture released by the Iranian Revolutionary Guards on Wednesday, Jan. 13, 2016, shows detained American Navy sailors in an undisclosed location in Iran. (Sepahnews via AP)

This week ten U.S. soldiers were held and then released from Iranian custody. Jakarta, Baghdad and Burkina Faso were among the areas hit by attacks. President Barack Obama delivered his seventh and final State of the Union address. The 2016 presidential election continued to intensify. We witnessed a historic lottery event. And the world bid farewell to too many, including actor Alan Rickman and musician and cultural great David Bowie. Read more about these events as they appeared in The Daily Edition this week.

Top line: “The story of 10 U.S. sailors’ release from Iranian custody took a new turn late Wednesday, when Iranian state television aired video of what appeared to be the early moments of the crew’s capture. The sailors were seen kneeling in surrender position on a boat deck with their hands on their heads, as an American flag fluttered from the rear of the vessel. A separate video, also aired by Iranian state television, appeared to show one of the sailors thanking the Iranians for their ‘hospitality’ and apologizing for Tuesday’s incident, in which two U.S. boats entered Iranian waters near Farsi Island, site of an Iranian Revolutionary Guard Corps base.”

Top line: “He posed four big questions for the country to answer, regardless of who the next president is, or who controls the next Congress. ‘First, how do we give everyone a fair shot at opportunity and security in this new economy? Second, how do we make technology work for us, and not against us – especially when it comes to solving urgent challenges like climate change? Third, how do we keep America safe and lead the world without becoming its policeman? ‘And finally, how can we make our politics reflect what’s best in us, and not what’s worst?’ The final point, he said, was perhaps the most important. ‘The future we want – opportunity and security for our families; a rising standard of living and a sustainable, peaceful planet for our kids – all that is within our reach,’ he said. ‘But it will only happen if we work together. It will only happen if we can have rational, constructive debates. It will only happen if we fix our politics.'”

Top line: “The Islamic State claimed responsibility for a terrorist attack in the Indonesian capital on Thursday, raising the specter of an expanded presence by the group in Southeast Asia…In Thursday’s attack in the center of Jakarta, militants targeted a police traffic post near an affluent shopping area, then set off explosions, apparently in a suicide attack, outside a nearby Starbucks coffee shop. At least seven people were killed, including five of the assailants, and 23 people were wounded, the police said.”

Top line: “Mr. Bowie’s death ends a far-reaching career that began in the late ‘60s and later took off when he embraced dramatic makeup and an outlandish stage wardrobe to put a theatrical spin on the genre that came to be known as glam rock. Albums such as 1972’s ‘The Rise and Fall of Ziggy Stardust and the Spiders from Mars,’ along with visually arresting live performances, made him an icon of not just music, but also art, fashion and other forms of live performance.
The musician’s androgynous personae, embodied by the flash of ‘Ziggy Stardust’ and the minimalist lines of the ‘Thin White Duke,’ made waves in society that are still being felt today.”

Top line: “Six numbers — 08, 27, 34, 04, 19 — and Powerball 10 were drawn Wednesday night in the historic lottery event. The three winners will split the colossal jackpot resulting in $528.8 million prize for each, according to officials.”

Top line: “Iraq’s prime minister vowed on Tuesday to continue the fight against Islamic State militants, a day after the group launched a suicide attack on a shopping mall in the capital, Baghdad, killing 18 people. Touring the bombed and destroyed mall in the eastern Shiite-dominated area of New Baghdad, Haider al-Abadi described the attack as a “desperate attempt” by militants after they lost control of the key western city of Ramadi, the capital of Anbar province.”

Top line: “Sylvester Stallone proved to be the season’s big comeback story, earning a Best Supporting Actor nod for his beloved turn in Creed – and receiving an excited round of applause from the crowd – alongside heavy favorites Leonardo DiCaprio, Brie Larson, Cate Blanchett, Michael Fassbender, Kate Winslet and Alicia Vikander. The Revenant leads the Oscar race with 12 nominations, while Mad Max: Fury Road follows hot on its heels with 10 nods – both including best picture.

Top line: “In the desert, Alabama and Clemson played a doozy. When it was over, the Crimson Tide had a 45-40 victory, their fourth national title since 2009 and the glory of prevailing in one of the best national championship games ever.”

Top line: “‘Actors are agents of change,’ he said. ‘A film, a piece of theatre, a piece of music, or a book can make a difference. It can change the world.'”