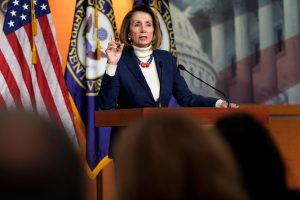 Speaker of the House Nancy Pelosi (D-CA) speaks during a press briefing on the 27th day of a partial government shutdown on Capitol Hill in Washington, U.S., January 17, 2019. REUTERS/Joshua Roberts

As the fourth week of the country’s longest-ever government shutdown drew to a close, sparring between the nation’s political leaders in the White House and Congress also showed no signs of abating. Speaker of the House Nancy Pelosi sent a letter to President Donald Trump suggesting a postponement of his planned State of the Union address, to which Trump responded with a letter canceling Pelosi’s trip to visit U.S. troops and military leaders in Afghanistan.

U.S. Attorney General nominee William P. Barr answered questions from the bipartisan Senate Judiciary Committee. A central focus was Barr’s stance on the Russia investigation as led by special counsel Robert Mueller, which he would oversee if confirmed.

The United Kingdom also remained in a shutdown of sorts, over their upcoming exit from the European Union, aka Brexit. British Prime Minister Theresa May’s proposed “soft Brexit” plan was overwhelmingly rejected by Parliament, but she survived a vote of no confidence that could have forced a vote on new leadership.

Four Americans were killed in Syria in a terrorist attack allegedly caused by the Islamic State. It was the first attack waged after President Trump’s declaration of victory against the terrorist group and announcement of plans to withdraw U.S. troops from the area.

Another deadly attack occurred at a popular hotel and business center in Nairobi, Kenya, killing at least 21 people, including a U.S. businessman.

In other news, the Trump administration is appealing a ruling by a New York federal judge that would stop them from adding a citizenship question to the upcoming U.S. Census in 2020, three Chicago police officers were found not guilty of covering up the fatal shooting of teenager Laquan McDonald by a fellow police officer, and Iowa Rep. Steve King joined fellow members of the House of Representatives in condemning him for public statements questioning why white supremacy is a bad thing.

Over 30,000 Los Angeles teachers in both public and charter schools also went on strike to demand smaller class sizes, higher staffing levels, and higher salaries. And Jack Bogle, the father of simple investing, died at the age of 89.

Top line: “She imperiled his State of the Union address. He denied her a plane to visit troops abroad. The shutdown battle between President Donald Trump and House Speaker Nancy Pelosi is playing out as a surreal game of constitutional brinkmanship, with both flexing political powers from opposite ends of Pennsylvania Avenue as the negotiations to end the monthlong partial government shutdown remain stalled. In dramatic fashion, Trump issued a letter to Pelosi on Thursday, just before she and other lawmakers were set to depart on the previously undisclosed trip to Afghanistan and Brussels. Trump belittled the trip as a “public relations event” — even though he had just made a similar warzone stop — and said it would be best if Pelosi remained in Washington to negotiate to reopen the government.” 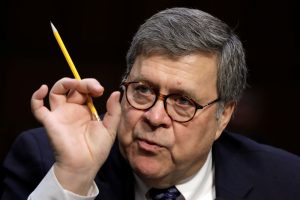 William Barr testifies at a Senate Judiciary Committee hearing on his nomination to be attorney general of the United States on Capitol Hill in Washington, U.S., January 15, 2019. (REUTERS/Yuri Gripas)

Top line: “William P. Barr’s nomination as President Trump’s attorney general is in front of the Senate Judiciary Committee, which is conducting a confirmation hearing Tuesday, and where Barr’s past commentary on special counsel Robert S. Mueller III’s investigation is front and center. Below are key moments from the hearing so far.” 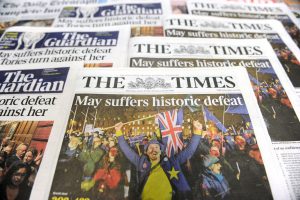 An arrangement of daily newspapers photographed in London on January 16, 2019 shows front pages reporting on the UK parliament’s rejection of the government’s Brexit deal. – Prime Minister Theresa May was left “crushed” and “humiliated”, Britain’s newspapers said on January 16 as they raked over the fallout from parliament’s huge rejection of her EU divorce deal. (Photo by DANIEL SORABJI/AFP/Getty Images)

Top line: “British Prime Minister Theresa May survived a “no-confidence” vote in her government Wednesday after a stinging defeat in Parliament over her Brexit deal to leave the European Union. The result means she stays in power for now. May won the attempt to oust her from power by 325 to 306 votes. The motion was called by opposition parties attempting to break a deadlock in Parliament over the deal May negotiated with the EU to leave the bloc. Defeat would have probably led to her resignation and the triggering of a general election within weeks. She has until Monday to devise a new Brexit plan acceptable to lawmakers. Her opponents have not ruled out calling further no-confidence votes.”

Top line: “Four Americans were among 19 people killed in Syria on Wednesday in a suicide bombing that was claimed by the Islamic State, just weeks after President Trump ordered the withdrawal of United States forces and declared that the extremist group had been defeated. The attack targeted an American military convoy in the northern city of Manbij while troops were inside the Palace of the Princes, a restaurant where they often stopped to eat during patrols, residents said. While the Americans were inside, a nearby suicide attacker wearing an explosive vest blew himself up. The bombing raised new questions about Mr. Trump’s surprise decision last month to end the American ground war in Syria. Critics of the president’s plans, including members of his own party, said Mr. Trump’s claim of victory over the Islamic State may have emboldened its fighters and encouraged Wednesday’s strike.”

Top line: “Jack Bogle, the founder of Vanguard who made investing and retirement affordable for millions, died Wednesday at the age of 89, the company said. Bogle transformed the way people invest their money when he created the first index mutual fund for individual investors in 1975. He believed that investors should own a mix of bonds and stocks but shouldn’t pay investment managers to pick them, so he created funds that represented a basket of stocks, such as those in the S&P 500 index. That approach to investing became what economists regard as the bedrock, most powerful tool for how everyday Americans should save and invest for the future. And over the past four decades, Bogle has drastically changed the way millions of people all over the world save and invest their money.” 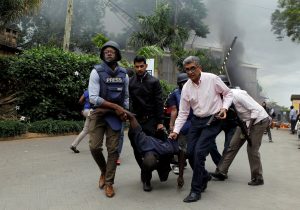 Rescuers and journalists evacuate an injured man from the scene where explosions and gunshots were heard at the Dusit hotel compound, in Nairobi, Kenya January 15, 2019. (REUTERS/Njeri Mwangi)

Top line: “Nine people have been arrested in Kenya following an attack on a luxury hotel compound in the capital Nairobi that killed at least 21 people. All five militants who stormed the DusitD2 hotel and business complex on Tuesday have been killed, officials say, and a major hunt is under way to find those who helped organise it. Somalia-based Islamist group al-Shabab says it was behind the attack. Kenya’s Red Cross says everyone who was missing has now been accounted for.”

Top line: “A federal judge in Manhattan shot down the Trump administration’s attempt to ask about citizenship on the 2020 census Tuesday, potentially paving the way for the case to land before the Supreme Court. U.S. District Judge Jesse Furman found that Commerce Secretary Wilbur Ross violated the Administrative Procedures Act by adding the question but also that challengers were unable to prove that the question was intended to discriminate against noncitizens. Furman ripped Ross’ decision-making process in adding the question, saying in his 277-page opinion that Ross’ move to ask for citizenship status for the first time in nearly 60 years committed “egregious” violations of a law structured to allow for judicial and congressional review of the actions taken by federal agencies.”

Top line: “Three Chicago police officers have been found not guilty of falsifying details to cover up the shooting death of Laquan Mcdonald in 2014. McDonald was shot 16 times by Chicago police officer Jason Van Dyke, who was found guilty of murder in October. Det. David March, 60, and patrol officers Joseph Walsh 50, and Thomas Gaffney, 45, were each charged with conspiracy, official misconduct and obstruction of justice. A Cook County judge acquitted the officers of all charges.”

Top line: “The U.S. House of Representatives voted overwhelmingly on Tuesday to pass a resolution disapproving statements made by Representative Steve King that were roundly criticized as racist, and King himself voted in favor of it. King, a Republican who represents a conservative district in Iowa, gave a media interview earlier this month in which he questioned why “white supremacy” is considered offensive. The measure, which passed 424 to 1, stopped short of a formal censure. The resolution instead quoted King’s remarks and then condemned racism in general. King himself voted in favor of the resolution, which referred to his remarks, because he said his comments were taken out of context and he too condemns white supremacy and racism.”

Top line: “After an apparent dayslong game of “chicken,” the Los Angeles teachers union and the school district went back to the negotiating table Thursday. Talks resumed for the first time since more than 30,000 educators walked off the job this week to demand smaller class sizes, more school staffing and higher teacher salaries. But while teachers demand millions more dollars in school funding, the Los Angeles Unified School District said it has already lost $97 million during the strike. That’s because the state funds schools based on daily attendance, and the number of kids going to school has plunged during the strike. On Thursday, for example, about 84,000 of the district’s 600,000 students went to school, LAUSD said. That’s a 37% drop in attendance from Wednesday.”