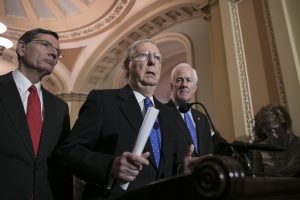 The U.S. government shut down this week after a last-ditch effort to advance the stopgap spending bill failed in the Senate Friday. Negotiations are expected to stretch into the weekend as lawmakers try to reach a deal.

A false missile alert rattled Hawaii residents over the weekend and California parents who allegedly abused their 13 children were charged with torture.

President Donald Trump claimed that his stance on the border wall with Mexico hasn’t changed and signed a bill renewing the NSA’s internet surveillance program.

Amazon made headlines Thursday when it announced 20 finalists for its second headquarters and the Dow reached a new record when it closed above 26,000 for the first time in its 121-year history.

Top line: “The federal government shut down at the stroke of midnight Friday, halting all but the most essential operations and marring the one-year anniversary of President Donald Trump’s inauguration in a striking display of Washington dysfunction. Last-minute negotiations crumbled as Senate Democrats blocked a four-week stopgap extension in a late-night vote, causing the fourth government shutdown in a quarter century.” 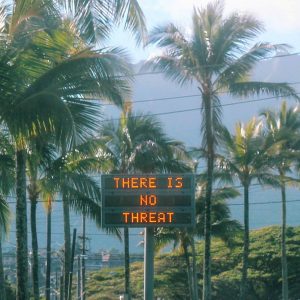 An electronic sign reads “There is no threat” in Oahu, Hawaii, U.S., after a false emergency alert that said a ballistic missile was headed for Hawaii, in this January 13, 2018 photo obtained from social media. Instagram/@sighpoutshrug/via REUTERS

Top line: “Just days after Louise and David Turpin’s 13 children were discovered deeply malnourished and — in some cases — shackled to furniture in their home, the Southern California couple have been charged with torture, child abuse and false imprisonment. The two parents face the possibility of life in prison.”

Top line: “President Donald Trump insisted Thursday that his position on his long-promised border wall “has never changed or evolved” and that Mexico will end up paying for it, apparently responding to and contradicting his chief of staff’s comments a day earlier. “The Wall is the Wall, it has never changed or evolved from the first day I conceived of it,” the president wrote online in the first of two posts. “Parts will be, of necessity, see through and it was never intended to be built in areas where there is natural protection such as mountains, wastelands or tough rivers or water.” “The Wall will be paid for, directly or indirectly, or through longer term reimbursement, by Mexico, which has a ridiculous $71 billion dollar trade surplus with the U.S.,” he continued in the second post. “The $20 billion dollar Wall is ‘peanuts’ compared to what Mexico makes from the U.S. NAFTA is a bad joke!”’

5. North and South Korea to march under one flag at Winter Olympics ‘peace games’ – The Guardian, Justin McCurry

Top line: “North and South Korea have confirmed they are to field a joint women’s ice hockey team and will march under a pro-unification flag at next month’s Winter Olympics, in the clearest sign yet of a thaw in tensions between the two countries. The two sides are to present their plan for a “peace games” to the International Olympic Committee (IOC) at the weekend, following three days of talks in the border village of Panmunjom. The South Korean unification ministry said the two countries had also exchanged opinions on the size of the North Korean team, joint cultural events and the possible use of the Masikryong ski resort in North Korea. North Korea also offered to send 230 members of its all-female cheerleading squad to the Games in Pyeongchang, which open on 9 February. Reports said the delegation would probably walk across the demilitarised zone, the heavily armed border separating the two Koreas, in a highly symbolic move.”

Top line: “The US will maintain an open-ended military presence in Syria to ensure the enduring defeat of the jihadist group Islamic State, counter Iranian influence, and help end the civil war. Secretary of State Rex Tillerson said President Donald Trump did not want to “make the same mistakes” that were made in 2011, when US forces left Iraq. The US has about 2,000 troops in Syria.”

Top line: “Former White House chief strategist Steve Bannon has reached an agreement with Special Counsel Robert Mueller to come in for an interview with the special counsel’s team office after he was subpoenaed by Mueller to appear before a grand jury, according to sources familiar with the matter. Bannon spent roughly ten hours behind closed doors with the House Intelligence Committee Tuesday. The panel also subpoenaed Bannon for testimony as part of its Russia investigation after he refused Tuesday to answer questions about his time working for Trump during the transition and in the White House.” 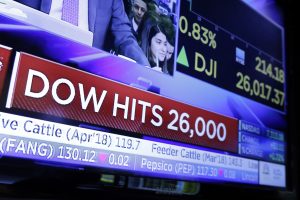 FILE – In this Tuesday, Jan. 16, 2018, file photo, a television screen on the floor of the New York Stock Exchange headlines the Dow Jones industrial average above 26,000 for the first time. President Donald Trump relentlessly congratulates himself for the healthy state of the U.S. economy, with its steady growth, low unemployment, busier factories and confident consumers. But in the year since Trump’s inauguration, most economists tend to agree on this: The economy has essentially been the same sturdy one that he inherited from Barack Obama. (AP Photo/Richard Drew, File)

Top line: “The stock market is on fire. The Dow just zoomed another 300 points and closed above 26,000 for the first time. The latest rush to buy stocks left the average up almost 8,000 points since President Trump’s 2016 election. The rally on Wednesday gave the Dow its best percentage gain since since November. And it showed that the upward trend remains intact despite a big reversal the day before. The Dow hit 26,000 on Tuesday morning before closing much lower. Wall Street is fired up because U.S. unemployment is the lowest in 17 years, global economic growth is gaining steam, corporate profits have never been stronger, and companies are sitting on record amounts of cash. Investors also love the GOP corporate tax cut, which will save companies billions of dollars and give them even more money to return to shareholders and to buy and merge with other companies.”

Top line: “Amazon is one step closer to planting a flag for its second headquarters. On Thursday, the world’s largest online retailer announced the final 20 selections for its HQ2. Amazon whittled down the list from proposals submitted by 238 communities in the US, Canada and Mexico. The company, which is based in Seattle, plans to pick a new host city later this year.”