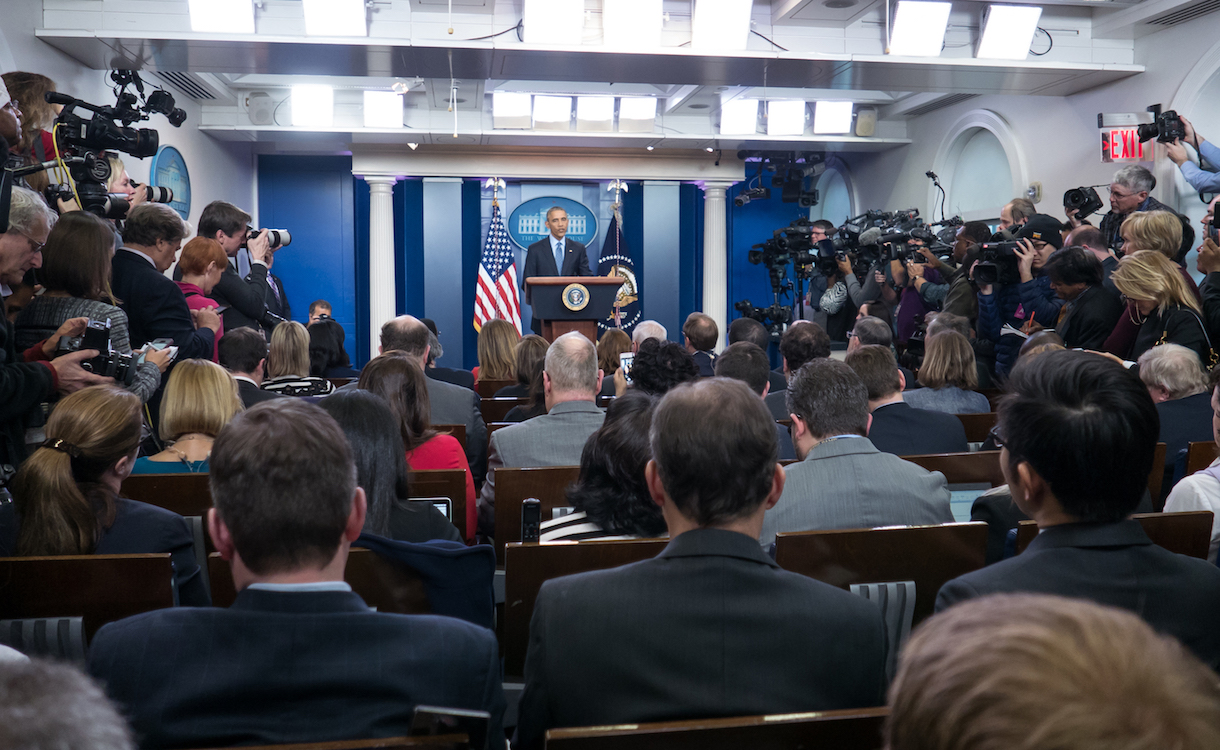 U.S. President Barack Obama holds the last news conference of his presidency in the Brady Press Briefing Room at the White House January 18, 2017 in Washington, DC. Photo by Cheriss May/NurPhoto via Getty Images

It was the end of an era in the White House this week as the Obama family moved out to make way for incoming president Donald Trump. Trump became commander in chief on Friday when he was sworn in by Chief Justice John Roberts on Capitol Hill.

On Thursday Steven Mnuchin and Rick Perry, Trump’s picks for treasury secretary and energy secretary respectively, answered questions on their plans should they achieve their nominated roles.

At his final news conference Wednesday, Obama said American would be “OK” during the transition period. “I believe in this country,” he said. “I believe in the American people.” Earlier in the day, Obama made the controversial decision to pardon soldier Chelsea Manning, commuting her sentence.

Joe Biden attended the World Economic Forum in Switzerland, calling on the world to stand up against Russia’s aggressive political tactics. The Nigerian air force accidentally bombed a refugee camp, killing more than 100 and in Italy eight people were found alive inside the rubble of a hotel after two days trapped following an avalanche.

Top line: “Donald Trump became the 45th President of the United States on Friday, vowing to drain power from Washington elites and always put “America first” in its dealings with the world at a moment of transformative political change.”

Top line: “President Obama used the final press conference of his presidency to deliver a hopeful message Wednesday to a nation nervous about the looming change of power in Washington: ‘At my core, I think we’re going to be OK.’”

Top line: “One after another, Donald Trump’s cabinet secretary picks – the men and women who will be his top advisers and government managers during his presidency – are taking their turn before Senate confirmation committees. While they’ve all been greeted with smiles, handshakes and warm introductions from their biggest supporters, some have fared much better than others.”

Top line: “President Barack Obama has commuted the 35-year prison sentence given to Chelsea Manning for leaking thousands of secret documents to Wikileaks in 2010, setting her on track for release in May.”

5. Joe Biden Is Warning About the Collapse of the ‘World Order’ as He Says Goodbye—TIME, Melissa Chan

Top line: “Biden urged leaders in Europe and the U.S. to defend democracies against dangers that he said include Russian President Vladimir Putin. Biden, in remarks at the World Economic Forum in Davos, Switzerland reported by CNBC, said Putin ‘has a different vision of the future,’ and he accused the Russian leader of trying to roll back decades of progress.’”

Top line: “Four children and a woman were saved on Friday from the wreckage of a mountain hotel in central Italy that was flattened by an avalanche, surviving almost two days in sub-zero temperatures in the buried ruins of the luxury spa.”

Top line: “Accused drug lord Joaquín ‘El Chapo’ Guzmán appeared in a U.S. court here for the first time Friday, pleading not guilty to the charges against him as prosecutors revealed in stunning detail how they intend to build and prove their case.”

Top line: The F.B.I. arrested the wife of the man who carried out a deadly terrorist attack in Orlando, Fla., and charged her with obstructing the investigation of the mass shooting, law enforcement officials said on Monday.