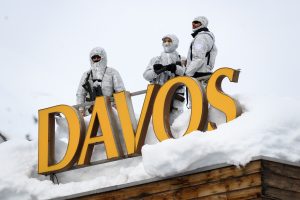 Armed security personnel stand guard on the rooftop of a hotel, next to letters reading “Davos” surrounded by snow, near the Congress Centre on January 25, 2018 in Davos, eastern Switzerland. FABRICE COFFRINI/AFP/Getty Images

President Donald Trump delivered his first speech at this year’s World Economic Forum in Davos, reassuring the global elite that “America is open for business” and “America first is not America alone.”

The speech garnered mixed reactions, even as news broke at home that Trump tried to fire Robert Mueller, Russia probe’s special counsel, in June. Trump pushed back on the reports labeling them “fake news.”

The White House also sent an immigration plan to Congress that included a path to citizenship for 1.8 million “Dreamers.”

Other significant developments over the week included the sentencing of Larry Nassar, former USA Gymnastics doctor, who sexually abused more than 150 women, a high school shooting in Kentucky, which claimed the lives of two people and multiple Women’s Marches across the U.S.

Around the world, the Taliban laid siege on the Intercontinental hotel in Kabul, Afghanistan and a U.S. led-airstrike killed 150 ISIS militants in Syria. 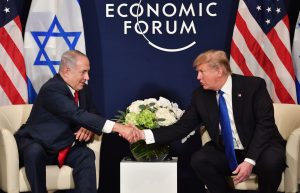 Top line: ‘“America is the place to do business. So come to America, where you can innovate, create and build,” Trump said. “I believe in America.” The president sought to strike a balance, tempering his nationalist agenda with reassurances to the globalist and cooperation-minded audience that his protectionist vision “does not mean America alone.” “When the United States grows, so does the world,” Trump said. “American prosperity has created countless jobs around the globe and the drive for excellence, creativity and innovation in the United States has led to important discoveries that help people everywhere live more prosperous and healthier lives.”’ 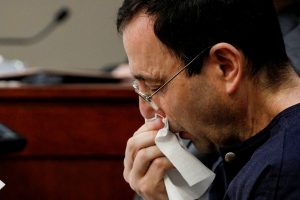 2. Larry Nassar sentenced to up to 175 years in prison for decades of sexual abuse – CNN, Eric Levenson

Top line: “Once a world-renowned sports physician treating America’s foremost Olympic women gymnasts, Larry Nassar now will spend the rest of his life behind bars. The disgraced former USA Gymnastics and Michigan State University doctor was sentenced to 40 to 175 years in prison, a judge announced Wednesday, after more than 150 women and girls said in court that he sexually abused them over the past two decades. “I’ve just signed your death warrant,” Judge Rosemarie Aquilina said in a Lansing, Michigan, courtroom. “I find that you don’t get it, that you’re a danger. That you remain a danger.”’ 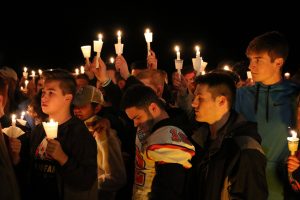 People attend a vigil for the victims of a fatal shooting at Marshall County High School on Thursday, Jan. 25, 2018, at Mike Miller County Park in Benton, Ky. The 15-year-old accused of the fatal shooting on Tuesday, which left over a dozen injured, was ordered held Thursday on preliminary charges of murder and assault. (AP Photo/Robert Ray)

Top line: “The 15-year-old student whose rampage at a rural Kentucky high school left two teens dead was charged with two counts of murder and 12 counts of first-degree assault, authorities said Wednesday. Assistant County Attorney Jason Darnall said the shooter, whose name has not been released because he is a juvenile, was charged in juvenile court. Darnall said he will request that the case be transferred to adult court.”

Top line: “President Trump ordered the firing last June of Robert S. Mueller III, the special counsel overseeing the Russia investigation, according to four people told of the matter, but ultimately backed down after the White House counsel threatened to resign rather than carry out the directive. The West Wing confrontation marks the first time Mr. Trump is known to have tried to fire the special counsel. Mr. Mueller learned about the episode in recent months as his investigators interviewed current and former senior White House officials in his inquiry into whether the president obstructed justice.”

Top line: “President Donald Trump on Monday will propose a pathway to citizenship for 1.8 million undocumented immigrants brought to the U.S. as children — a key concession to Democrats that he hopes will win their support for a massive border wall with Mexico. In a call with White House surrogates and Hill staffers Thursday afternoon, senior White House adviser Stephen Miller outlined the new framework, which also calls for dramatic restrictions on legal immigration as well as $25 billion for border security.” 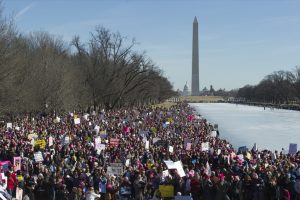 Participants in the Women’s March gather near the Lincoln Memorial in Washington. AP Photo/Cliff Owen

Top line: “Hundreds of thousands gathered around the nation Saturday, brandishing signs and sporting pink hats, at Women’s Marches in cities across the U.S. in the second such protest since Donald Trump entered the White House. The largest marches appeared to take place in Washington D.C., New York City, Chicago and Los Angeles, but groups also amassed in Milwaukee, Denver, Dallas, as well as Montgomery, Alabama, and many other towns and cities all over the country. This second march seemed to take on a new importance, as people in the streets in major cities registered attendees to vote and people spoke of their responsibility as a member of a constituency. While most marchers came to share their opposition to the Trump administration, they also spoke about the importance of voting in the upcoming 2018 midterm election.” 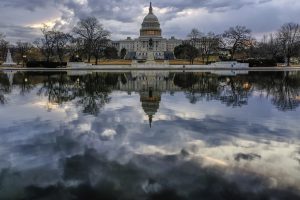 Top line: “On Monday, Congress ended a short-lived government shutdown, voting to fund both a popular children’s health-care program and government operations for another few weeks. Senate Majority Leader Mitch McConnell (R-Ky.) got 33 Democratic votes by promising that the Senate would look at how to protect the “dreamers” from deportation, discussing legal status for undocumented immigrants brought here as children. We offer four takeaways about the polarized congressional dynamics that more often lead to short-term deals rather than substantive laws.”

9. Syria war: US strikes on IS headquarters ‘kills 150 militants’ – BBC

Top line: “The US-led coalition against the jihadist group Islamic State (IS) says it has killed up to 150 militants in air strikes on a headquarters in Syria. A statement said the strikes took place on Saturday near al-Shafah, in the Middle Euphrates river valley in the south-eastern province of Deir al-Zour. A combination of intelligence and continuous target observation ensured no civilians were harmed, it added. There was no confirmation of the attack from IS or its supporters. However, the group’s Amaq news agency did say 14 people, including seven women, were killed in US air strikes that targeted al-Shafah on Tuesday. The activist-run Deirezzor24 website also said the village was hit that day.”

Top line: “ The United States added Russian officials and energy firms to a sanctions blacklist on Friday, days before details of further possible penalties against Moscow are due to be released. Washington could release reports as early as Monday laying out the possibilities for expanded sanctions against Russia over its alleged meddling in the 2016 U.S. presidential election, an accusation the Kremlin has repeatedly denied. Leading Democrats in the U.S. Congress wrote to Trump on Friday, demanding that the administration use Monday’s deadline to retaliate for what they described as cyber attacks intended to influence other countries’ elections. A Treasury Department spokesperson said the department is “actively working” on reports required under the “Countering America’s Adversaries Through Terrorism Act” and aimed to release them consistent with timelines in the legislation. On Friday, Treasury said it had added 21 people and nine companies to the sanctions list, including some that were involved in the delivery of Siemens gas turbines to Crimea. It said Friday’s announcement was not related to the reports due on Monday.”

~SonaliK is reading Healthy Made Easy by Self