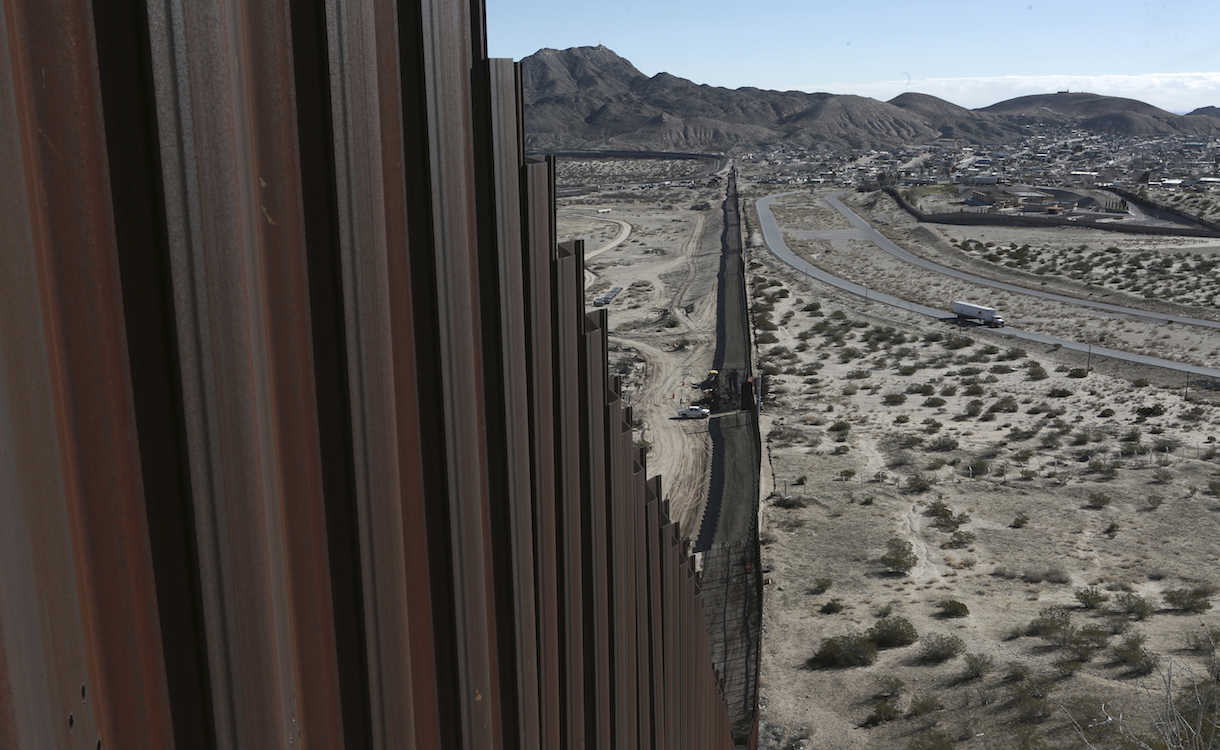 A truck drives near the Mexico-US border fence, on the Mexican side, separating the towns of Anapra, Mexico and Sunland Park, New Mexico, Wednesday, Jan. 25, 2017. U.S. President Donald Trump will direct the Homeland Security Department to start building a wall at the Mexican border. (AP Photo/Christian Torres)

In his first week in office, newly elected President Donald Trump created a host of headlines. Trump reinstated a ban on American funding for overseas organizations that provide abortions, imposed a federal hiring freeze, withdrew the U.S. from the Trans-Pacific Partnership trade deal and ordered “immediate construction” of the border wall with Mexico. A meeting between Mexican President Enrique Peña Nieto and Trump was later canceled.

Trump’s Press Secretary Sean Spicer held his first briefing Monday, on the heels of a statement he made Saturday in which he made claims about Trump’s inauguration crowd size and accused the media of publishing pictures that were “intentionally framed” to downplay numbers. On Monday Spicer responded to his claims, telling journalists that, “sometimes we can disagree with the facts.”

Later in the week British Prime Minister Theresa May headed to Washington to meet Trump for the first time since both took on their leadership roles. In a joint press conference the two discussed their commitment to maintaining a strong partnership between their countries. Trump reiterated America’s “deep bond with Britain”.

Top line: “In his first week in office, he got down to work. With a whirlwind of executive actions, public statements and tweets, the Republican ordered the most radical and controversial sweeping reforms of any president’s first days in office in living memory.”

Top line: “Mexico’s president, Enrique Peña Nieto, has cancelled a scheduled visit to Washington next week to meet with Donald Trump, after the US president signed an executive order to move forward on construction of a border wall and repeated his claim that Mexico would be forced to pay for it.”

Top line: “He declared President Donald Trump willing to work with any partner on combating ISIS, including Russia. He said the administration would work to develop bilateral trade agreements with Asian nations after Trump withdrew the US from the Trans Pacific Partnership. And he announced that Trump hasn’t ordered intelligence agencies to stop investigating potential ties between his administration and Russia.”

Top line: “The strength of the ‘special relationship’ between the two countries came into question prior to the meeting as Trump championed policies opposed by May. But any divisions between the two leaders were downplayed as the president pledged to ‘renew our deep bond with Britain’ and promised America’s ‘lasting support.’”

Top line: “A series of furious storms roared through the Southeast on Sunday, killing at least 18 people, splintering homes and toppling trees and power lines in the path. Officials said 14 people were killed in Georgia.”

Top line: Most of the construction, it said, would be in existing settlement blocs that Israel intends to keep under any future peace agreement with the Palestinians. However, a breakdown provided by the prime minister’s office showed large portions of the planned homes would be outside existing blocs.”

Top line: “Mary Tyler Moore, whose witty and graceful performances on two top-rated television shows in the 1960s and ’70s helped define a new vision of American womanhood, died on Wednesday in Greenwich, Conn. She was 80.”

Top line: “By defeating her sister Venus Williams 6-4, 6-4 in the Australian Open final Saturday, Serena Williams won her 23rd major title, breaking the record she had shared with Steffi Graf.”

Top line: “On Tuesday morning, La La Land rode a wave of critical love to tie the record for most nominations received by a single film—14, the same number as Titanic and All About Eve—and it might just be impossible for any other movie to stall its tuneful front-runner momentum. At the same time, a major overhaul of the Academy and 12 months of recovery from #OscarsSoWhite led this year’s awards rise to the occasion by celebrating a diverse pool of actors and assorted film-industry creatives, including Arrival’s Bradford Young, one of the few black cinematographers ever nominated for an Oscar.”