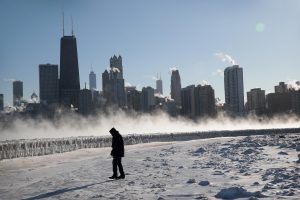 A man walks along the lakefront as temperatures hovered around -20 degrees on January 30, 2019 in Chicago, Illinois. Businesses and schools have closed, Amtrak has suspended service into the city, more than a thousand flights have been cancelled and mail delivery has been suspended as the city copes with record-setting low temperatures. (Photo by Scott Olson/Getty Images)

A Cold War-era nuclear arms control treaty between the United States and Russia is on the brink of ending now that the U.S. is pulling out of the agreement. According to Secretary of State Mike Pompeo, who made the announcement, the withdrawal is due to Russia’s alleged violation of the 1987 deal by developing and deploying missiles for several years.

Meanwhile, much of the country was gripped by record-breaking below-freezing temperatures, wind and snow—a polar vortex that left at least 21 people dead.

Tensions between the U.S. and China, as well as Chinese telecom giant Huawei, continued to escalate. The U.S. accused the company of stealing U.S. trade secrets and made a formal request to extradite the company CFO, Meng Wanzhou, from Canada for allegedly committing bank fraud via doing business in Iran.

American tech giants Apple and Facebook faced trouble of their own, this time on the consumer privacy end. Apple had to disable their FaceTime app following the revelation that it enabled users to listen to and view other callers without their knowledge, and Facebook admitted to paying teens up to $20 to install a VPN that allowed the company to mine and track all of their personal data.

In sports news, U.S. skiing icon and Olympic gold medalist Lindsey Vonn announced her impending retirement following a final competition next week in Sweden, and Super Bowl LIII is this weekend, featuring a face-off between the Los Angeles Rams and the New England Patriots.

Top line: “The United States announced Friday that it is pulling out of a landmark nuclear arms treaty with Russia, arguing that it should not be constrained by a deal Moscow is violating with “impunity” by deploying banned missiles. Democrats in Congress and some arms control advocates slammed the decision as opening the door to an arms race. President Donald Trump repeated a yearslong U.S. accusation that Russia secretly developed and deployed “a prohibited missile system that poses a direct threat to our allies and troops abroad.” He said the U.S. had adhered to the Intermediate-Range Nuclear Forces treaty since it was signed in 1987, but Russia had not.”

Top line: “At least 21 people have died in one of the worst cold snaps to hit the US Midwest in decades. Ninety million people – a third of the US – have seen temperatures of -17C (0F) or below. Some 250 million Americans overall have experienced the “polar vortex” conditions. Hospitals have been treating patients reporting frostbite as parts of the country ground to a halt. Temperatures are expected to swing to above average over the weekend.”

Top line: “Sen. Cory Booker of New Jersey said Friday that he will seek the Democratic nomination for president, adding his name to a growing and increasingly diversified field of 2020 candidates intent on taking on President Trump. Booker made his announcement via an email and video to supporters. Booker joined a race already occupied by three other senators — Kamala D. Harris of California, Elizabeth Warren of Massachusetts and Kirsten Gillibrand of New York — as well as several other candidates. In a midday interview on ABC’s “The View,” Booker said his campaign would be distinguished from the others by his entree into politics, particularly his tenure as mayor of Newark.” 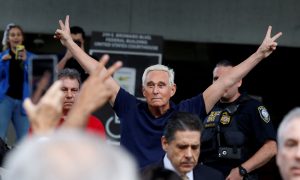 Roger Stone reacts as he walks to microphones after his appearance at Federal Court in Fort Lauderdale, Florida, U.S., January 25, 2019. REUTERS/Joe Skipper TPX IMAGES OF THE DAY

Top line: “Roger Stone, a longtime Republican campaign adviser and confidant of President Donald Trump, pleaded not guilty Tuesday morning to seven criminal charges of false statements, witness tampering and obstruction of justice. Special counsel Robert Mueller and the US attorney for the District of Columbia have accused Stone of lying to congressional investigators about his communications regarding WikiLeaks’ publication of stolen emails meant to damage Hillary Clinton’s presidential campaign in 2016. In one charge, he is accused of threatening a contact of his whose congressional testimony about WikiLeaks would contradict Stone’s. The indictment also describes how Stone allegedly coordinated with top Trump campaign officials about his outreach to WikiLeaks.” 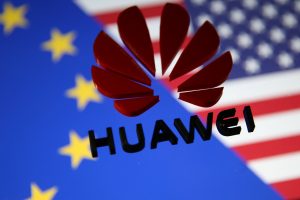 A 3D printed Huawei logo is placed on glass above displayed EU and US flags in this illustration taken January 29, 2019. REUTERS/Dado Ruvic/Illustration

Top line: “Huawei Technologies Co. founder Ren Zhengfei proved a master strategist in building his company into the global leader in telecommunications equipment. Now, in the wake of two U.S. criminal indictments, he faces the unfamiliar task of working out the best legal strategy for allegations that could threaten his company’s very existence. Huawei’s first impulse has been to fight. The company denied any wrongdoing and said it expects to be found innocent in court. Yet Ren and his legal team have to consider opening negotiations with the Justice Department to find out how to get the company out of peril. The company signaled it is open to that. However, there’s no easy solution. Huawei and its chief financial officer are charged with bank fraud over the telecom’s business in Iran, while company affiliates are accused of stealing trade secrets from a U.S. wireless operator. At a minimum, Huawei would have to pay a fine, probably in the hundreds of millions of dollars, and promise never to steal intellectual property again, upon penalty of severe sanctions. Ren’s own daughter, Meng Wanzhou, the CFO, faces a lengthy prison term if she’s convicted of misleading banks about the company’s activities in Iran.”

Top line: “Apple is now facing a formal investigation over its FaceTime eavesdropping bug. New York Attorney General Letitia James announced the probe on Wednesday, saying Apple failed to warn people about the security flaw and didn’t address the issue quickly. Apple’s FaceTime feature suffered from a security vulnerability through which callers could eavesdrop on recipients, even if the person receiving the call didn’t pick up the phone. It worked by exploiting an issue with the Group FaceTime feature and adding a third person onto the call. The tech giant said a fix would be coming soon and has disabled Group FaceTime until then. The investigation will focus on Apple’s response to the FaceTime bug. The attorney general’s office is accepting public complaints about the vulnerability on a hotline at 1-800-697-1220.”

Top line: “American and Taliban officials have agreed in principle to the framework of a deal in which the insurgents would guarantee Afghan territory is never used by terrorists, which could lead to a full pullout of American troops in return for larger concessions from the Taliban, the chief United States negotiator said on Monday. The negotiator, Zalmay Khalilzad, said those concessions must include the Taliban’s agreement to a cease-fire and to talk directly with the Afghan government, which the insurgents have persistently opposed in the past.”

Top line: “Olympic gold medalist Lindsey Vonn announced her retirement Friday, thereby wrapping up one of the most accomplished careers in the history of American skiing. In social media posts Friday morning, Vonn wrote that she has “finally accepted” that a string of injuries will prevent her from continuing to compete. The 34-year-old said she will race in two events at the World Championships in Sweden next week in what will be her final competition. Vonn was unable to finish a Super-G race in Italy last month and has, most recently, been dealing with a nerve injury. She wrote on social media that she quietly had surgery last year to remove cartilage from one of her knees before tearing the lateral collateral ligament in her left knee in a crash in November. Vonn, who first competed in a World Cup event in 2000 at age 16, had hinted at retirement in recent weeks. She will leave the sport as one of the most accomplished skiers in U.S. history — and undoubtedly, one of its biggest stars.”

9. Facebook pays teens to install VPN that spies on them – TechCrunch, Josh Constine

Top line: “Desperate for data on its competitors, Facebook has been secretly paying people to install a “Facebook Research” VPN that lets the company suck in all of a user’s phone and web activity, similar to Facebook’s Onavo Protect app that Apple banned in June and that was removed in August. Facebook sidesteps the App Store and rewards teenagers and adults to download the Research app and give it root access to network traffic in what may be a violation of Apple policy so the social network can decrypt and analyze their phone activity, a TechCrunch investigation confirms. Facebook admitted to TechCrunch it was running the Research program to gather data on usage habits.”

Top line: “It’s been a full year in the making, and Sunday it will finally arrive: Super Bowl LIII between the Los Angeles Rams and New England Patriots. Winter is here, and so is the year’s biggest sporting event.”

~ HeatherC is reading Hello! To Kindness by Hello! Magazine