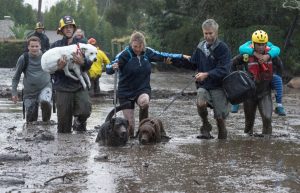 Emergency personnel evacuate local residents and their dogs through flooded waters after a mudslide in Montecito. Kenneth Song/Santa Barbara News-Press via REUTERS

President Donald Trump remained front and center of the news this week, as he made incendiary remarks about people from developing nations and issued an ultimatum to Iran over nuclear deal.

Other developments of note included former White House chief strategist Steve Bannon stepping down as the executive chairman of Breitbart News and the death toll rising from the California mudslides. In Las Vegas, CES pushed technological boundaries and the potential of Oprah running for president rippled after the Golden Globes.

Top line: “President Trump’s comments about African countries and Haiti drew condemnation from around the world Friday, putting the White House and Republicans on the defensive while casting doubt on hopes of resolving disputes in the coming weeks over immigration legislation. In a tweet Friday, Trump seemed to deny using the term “shithole” to refer to some countries during a private White House meeting Thursday, but acknowledged he used “tough” language during the negotiations. Among Republicans, there were differing responses to the comments, but few of them outright condemned his remarks.”

Emergency personnel evacuate local residents and their dogs through flooded waters after a mudslide in Montecito. Kenneth Song/Santa Barbara News-Press via REUTERS

Top line: “On the fourth day of search for victims of the southern California mudslides, the death toll has increased. The Santa Barbara sheriff’s office reports that an 87-year-old victim was located in his Montecito, Calif. home, bringing the total number of casualties from to 18. At least 7 people, including a 2-year-old, remain missing. The victims’ ages ranged from 3 to 89 and the cause of death for all was “multiple traumatic injuries due to flash flood with mudslides due to recent wildfire,” according to the sheriff’s office. The mudslides were part of an evolving natural disaster. They followed heavy rains in Santa Barbara County, where the enormous Thomas fire burned vegetation off the hillsides. The mud swept homes off their foundations and caused a 30-square-mile debris flow. U.S. Route 101, California’s primary coastal route, remains partially shut down.”

3. Steve Bannon steps down from Breitbart after break with Trump – USAToday, Jessica Estepa

Top line: “Steve Bannon — the controversial former White House adviser scolded by the president for his explosive comments in a tell-all book about the Trump administration — stepped down Tuesday from his top post at Breitbart News, the website that helped fuel Donald Trump’s presidential campaign.”I’m proud of what the Breitbart team has accomplished in so short a period of time in building out a world-class news platform,” Bannon, who was the chair of the far-right media organization, said in a statement.”

Top line: “Trump said on Friday he would waive nuclear sanctions on Iran for the last time to give the United States and European allies a final chance to amend the pact. Washington also imposed sanctions on the head of Iran’s judiciary and others. Russia – one of the parties to the Iran pact alongside the United States, China, France, Britain, Germany and the European Union – called Trump’s comments “extremely negative.” The ultimatum puts pressure on Europeans, key backers of the 2015 nuclear deal, to satisfy Trump, who wants the pact strengthened with a separate agreement within 120 days. While approving the waiver on U.S. sanctions related to the nuclear deal, Washington announced other sanctions against 14 Iranian entities and people, including judiciary head Ayatollah Sadeq Larijani, a close ally of Iran’s Supreme Leader Ayatollah Ali Khamenei.Describing sanctions against Larijani as “hostile action”, Iran’s Foreign Ministry said the move “crossed all red lines of conduct in the international community and is a violation of international law and will surely be answered by a serious reaction of the Islamic Republic,” state media reported.”

Top line: “Sen. Dianne Feinstein, D-Calif., on Tuesday released the full transcript from Fusion GPS co-founder Glenn Simpson’s testimony before the Senate Judiciary Committee regarding Russian interference in the 2016 presidential election.”The innuendo and misinformation circulating about the transcript are part of a deeply troubling effort to undermine the investigation into potential collusion and obstruction of justice,” Feinstein said in a statement. “The only way to set the record straight is to make the transcript public.”’

Top line: “Over the next few weeks, Facebook’s news feed will start showing fewer news articles, and less marketing content and ads, Zuckerberg wrote on Thursday. Instead, users should start seeing more vacation videos from their friends, photos of their nephew’s college graduation, and other more family-friendly posts about the people they know. It’s a major change for Facebook, which over the years has shifted from being a social networking service connecting friends and family to one of the world’s biggest distributors of news and online ads.”

Top line: “Just one day after inviting states to add new work requirements to Medicaid, the Trump administration approved Kentucky’s request for a waiver to do just that, the state’s governor, a Republican, announced on Friday. The move sets up Kentucky as the first test case for the drastic shift in federal policy, which health policy experts say will most likely face lawsuits before it can be fully entrenched. Previous administrations had rejected attempts by states to impose work requirements on Medicaid recipients, saying they went against the law’s intent. “It will be a model for the nation,” Gov. Matt Bevin said at a news conference announcing the changes.”

Top line: “As he meticulously planned the Las Vegas attack, the man responsible for the worst mass shooting in modern American history took elaborate steps to stymie the inevitable law enforcement investigation, according to federal court documents unsealed on Friday. The F.B.I. search warrants shed new light on the degree to which the gunman, Stephen Paddock, who killed 58 people and wounded more than 500 others when he opened fire on a crowd from a hotel room in October, planned the attack and prepared for the aftermath. One of the warrants described how Mr. Paddock “destroyed or tried to hide digital media devices.” Investigators said he used anonymous communications devices, including a prepaid cellphone, to cover his tracks and employed a “level of sophistication which is commonly found in mass casualty events.” “Paddock planned the attack meticulously and took many methodical steps to avoid detection of his plot and to thwart the eventual law enforcement investigation that would follow,” the F.B.I. said. Mr. Paddock’s motive for the attack remains unknown.” 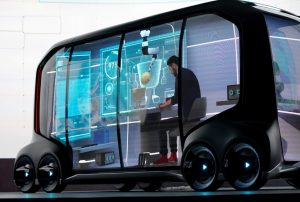 Top line: “CES, the world’s biggest technology show, is taking place in Las Vegas this week. The trade show is a yearly preview of the gadgets and landfill hitting shelves over the next 12 months; it’s also a chance for companies to demonstrate some of their wackier concepts, which may never come to fruition. Here’s a roundup of all the news and highlights from the big event so far.” 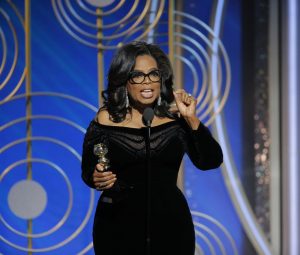 Oprah Winfrey accepts the 2018 Cecil B. DeMille Award and talks about a “new day” in Hollywood during the 75th Annual Golden Globe Awards. Paul Drinkwater/ NBCUniversal via Getty Images

Top line: “Oprah Winfrey is “actively thinking” about running for president, two of her close friends told CNN Monday. The two friends, who requested anonymity in order to speak freely, talked in the wake of Winfrey’s extraordinary speech at the Golden Globes Sunday night, which spurred chatter about a 2020 run. Some of Winfrey’s confidants have been privately urging her to run, the sources said. One of the sources said these conversations date back several months. The person emphasized that Winfrey has not made up her mind about running. A representative for Winfrey has not responded to requests for comment.”