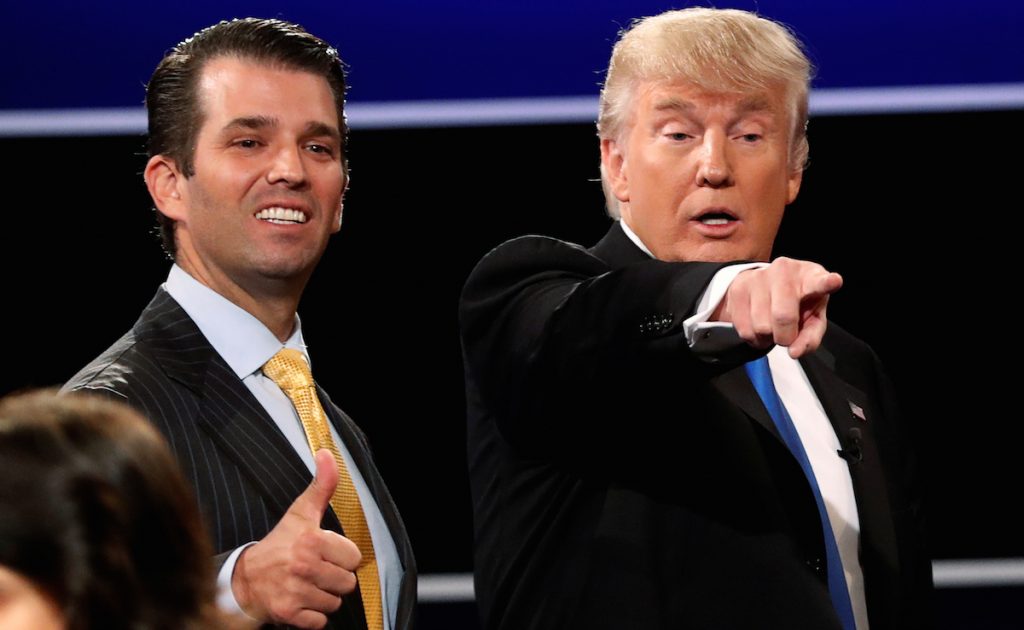 The controversy surrounding Donald Trump Jr.‘s meeting with Russians who offered to help his father’s presidential campaign led the news for much of the week as reporting came out over the course of a few days. The drip of information largely overshadowed President Trump’s trip to France over Bastille Day.

Elsewhere, two men were charged with the killing of four people who went missing in Pennsylvania, Republicans released a new version of their health care bill and a Hawaii court ruled to loosen the travel ban. Read more about these stories and the other biggest news of the week, from The Daily Edition.

Top line: “Over the past several days, The New York Times has disclosed the existence of the meeting, whom it involved and what it was about. The story has unfolded as The Times has been able to confirm details of the meetings.

But the email exchanges, which were reviewed by The Times, offer a detailed unspooling of how the meeting with the Kremlin-connected Russian lawyer, Natalia Veselnitskaya, came about — and just how eager Donald Trump Jr. was to accept what he was explicitly told was the Russian government’s help.”

Top line: “The Russian lawyer who met with Donald Trump Jr. and others on the Trump team after a promise of compromising material on Hillary Clinton was accompanied by a Russian-American lobbyist — a former Soviet counterintelligence officer who is suspected by some U.S. officials of having ongoing ties to Russian intelligence, NBC News has learned.”

Top line: “Hours after finding a fourth body buried in a farm here, authorities charged two men Friday with multiple counts of homicide in what authorities said were marijuana deals that turned murderous.

The disappearances of four men, ages 19 to 22, in recent days rattled this wealthy region north of Philadelphia that is better known for antiquing than for homicide. The disturbing case gained some clarity Friday, with officials describing a violent collision of guns, drugs, mental illness, and money — while acknowledging that the motivations for the slayings remain unclear.”

Top line: “President Donald Trump and other administration officials lobbied Republicans Friday from both sides of the Atlantic to keep the Senate GOP’s reworked health care bill from crashing, with the president saying wavering senators ‘must come through.’

But the measure, culminating the GOP’s seven years of pledging to repeal President Barack Obama’s health care law, encountered turbulence from two influential Republican governors and the nation’s largest doctors’ group. That complicated Senate Majority Leader Mitch McConnell’s task of preventing even a single additional GOP senator from rejecting the legislation, which would kill it.”

5. British baby Charlie Gard to be evaluated by US doctor—CNN, Debra Goldschmidt and Richard Greene

Top line: “Baby Charlie Gard, the 11-month-old with a rare, terminal medical condition who has been the center of an ongoing legal battle, will be evaluated by a doctor from the United States…

His parents, Chris Gard and Connie Yates, successfully raised money in hopes of bringing their son to the US for an experimental treatment, but doctors at the Great Ormond Street Hospital in London, where Charlie has been since October, argued in court that it was not in their patient’s best interest.

After a series of hearings and appeals in several courts, the European Court of Human Rights decided on June 30 not to intervene in the case, which upheld a British Supreme Court decision that the hospital could discontinue life support to Charlie and he could not be transferred.”

Top line: “The decision does not halt the travel ban, which was reinstated by the Supreme Court on June 29 with exemptions for a limited list people with “bona fide” U.S. connections, such as close family members. But going against Trump administration policy, the ruling expands the exceptions to include travelers who have grandparents, grandchildren, aunts, uncles, nieces, nephews, cousins and brothers- and sisters-in-law in the U.S.”

Top line: “On Friday two teenage boys, a 15-year-old and a 16-year-old, were arrested as police launched a major investigation into a five acid attacks that took place in less than 90 minutes across east London, with one victim said to have suffered life-changing injuries.”

Top line: “Three Arab-Israeli gunmen shot dead two Israeli policemen near one of Jerusalem’s most holy sites on Friday and were then killed by security forces, police said, in one of the most serious attacks in the area for years.”

Top line: “One of the largest icebergs ever recorded broke off from an ice shelf in Antarctica, British scientists announced Wednesday…

The iceberg — or icebergs if it breaks up ever further — may remain in the region, where the ocean is quite cold, sticking around for years or even decades. Or it could move with ocean currents and winds in a northward direction, where it will be eroded more quickly.”

The campaigner was repeatedly jailed throughout his life. When not in prison, he was subject to severe restrictions while his wife, Liu Xia, was placed under house arrest…

He was a pro-democracy figurehead for activists outside mainland China, although many of his compatriots were unaware of his struggles because the authorities rigorously censored news about him.”