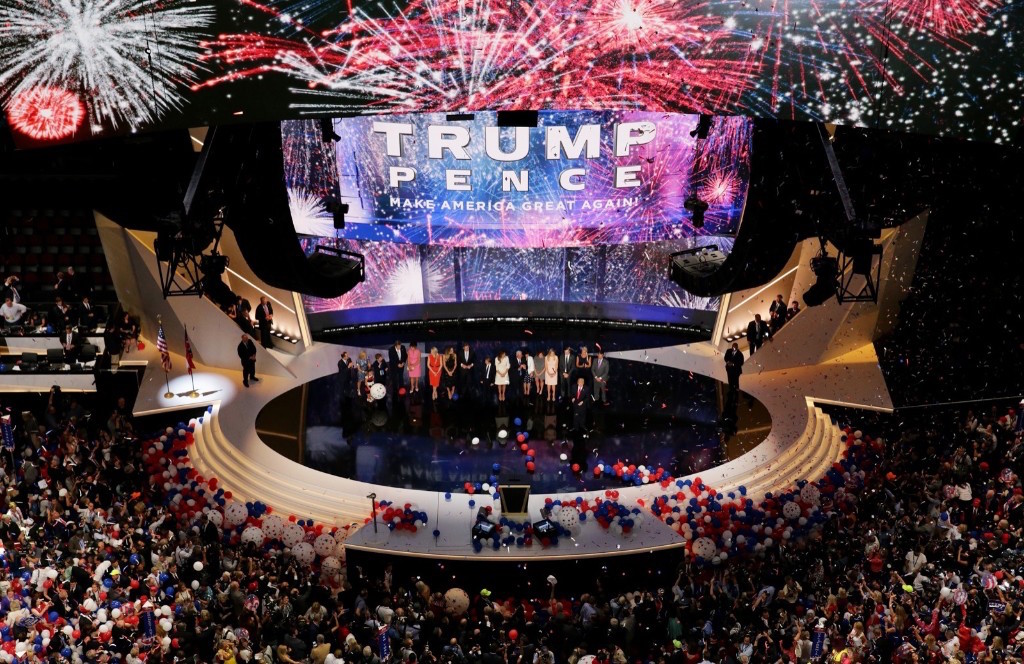 This week was dominated by the Republican National Convention, during which Donald Trump accepted the party’s nomination for president. The four-day long event was filled with ups—like the largely lauded speeches by Trump’s children—and downs, including the plagiarism controversy surrounding Melania Trump’s speech and the booing of Sen. Ted Cruz after he failed to endorse the nominee on stage. But by the end of the week focus turned to Democratic candidate Hillary Clinton, who tapped Virginia Sen. Tim Kaine as her vice presidential pick ahead of her party’s convention next week.

Around the world terror struck. A deadly shooting took place in Munich, Germany on Friday and more than 60 were killed in an ISIS attack in Kabul, Afghanistan Saturday.

Read the biggest stories of the week, as they appeared in The Daily Edition.

Top line: “Donald J. Trump was formally crowned the Republican nominee for president at the party’s convention on Tuesday, ending a tumultuous primary season but not the nagging questions about his polarizing candidacy as he once again found himself embroiled in controversy.”

Trump Organization staff writer Meredith McIver, in a statement taking responsibility for the plagiarism incident, said she had ‘offered my resignation to Mr. Trump and the Trump family, but they rejected it.’

The Trump campaign has been in damage control mode ever since observers starting pointing out the striking similarities soon after Melania Trump wrapped up her highly anticipated speech on Monday night.”

‘Please, don’t stay home in November,’ he said. ‘If you love our country and if you love your children as much as I know you do, stand, and speak, and vote your conscience, vote for candidates up and down the ticket who you trust to defend our freedom and to be faithful to the Constitution.’

Delegates chanted at him to endorse Trump, and the phrase ‘vote your conscience’ appeared to infuriate the crowd. Anti-Trump forces had unsuccessfully sought to make rules changes that would have unbound delegates and allowed them to vote their conscience.”

Top line: “The teen gunman who killed nine people in a shooting rampage in Munich on Friday was a mentally troubled individual who had extensively researched spree killings and had no apparent links to ISIS, police said.

Speaking at a press conference in the southern German city Saturday, police officials said the 18-year-old lone attacker — who died of a self-inflicted gunshot wound — had no political motivations, and no references to religion had been found in documents in his home.”

Top line: “Hillary Clinton has named Tim Kaine, a US senator from Virginia, as her vice-presidential running mate, turning to a seasoned voice on foreign affairs and a representative of a key battleground state to complete the Democratic ticket…The decision reflects Clinton’s efforts to draw a sharp contrast with Republican nominee Donald Trump, a candidate she has declared unfit and unprepared for the presidency. Clinton has sought to define her candidacy as one of experience and competence; in Kaine she has turned to a partner who, like her, has served in public office for decades.”

Top line: “At least 61 people were killed and another 207 wounded in the Afghan capital on Saturday, when a suicide bomber detonated his explosives-packed clothing among a large crowd of demonstrators, officials and witnesses said.”

Top line: “Roger Ailes resigned as chairman and CEO of Fox News Thursday, after days of speculation as to his future with the network after a sexual harassment lawsuit was filed against him by a former anchor, 21st Century Fox said…Ailes, 76, was accused of sexual harassment in a lawsuit filed earlier this month by former Fox News host Gretchen Carlson.”

Top line: “French authorities say they believe the man who killed 84 people when he plowed a truck into a crowd in Nice, France, had multiple accomplices and planned the attack for months.”

Top line: “The National Basketball Association on Thursday dealt a blow to the economy and prestige of North Carolina by pulling next February’s All-Star Game from Charlotte to protest a state law that eliminated anti-discrimination protections for lesbian, gay, bisexual and transgender people.

The move was among the most prominent consequences since the law, which also bars transgender people from using bathrooms in public buildings that do not correspond with their birth gender, was passed in March.”