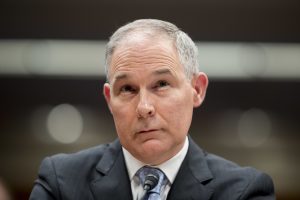 In this May 16, 2018 file photo, Environmental Protection Agency Administrator Scott Pruitt appears before a Senate Appropriations subcommittee on the Interior, Environment, and Related Agencies on budget on Capitol Hill in Washington. Pruitt had a top aide seek a used mattress from the Trump International Hotel and perform other personal chores for him, according to an email and testimony from the aide released Monday. (AP Photo/Andrew Harnik, File)

Scott Pruitt resigned as head of the Environmental Protection Agency amidst over a dozen ethics investigations. His resignation letter cited “the unrelenting attacks” on himself and his family as the reason for leaving. Pruitt’s temporary replacement is deputy administrator Andrew Wheeler.

On the world stage, the effort to rescue 12 Thai boys and their 25-year-old soccer coach trapped in rapidly flooding caves underground continued to attract support and resources from a coalition of nations, including the United States. While the team was found alive, there is no guaranteed-safe way to get them out, and the ordeal claimed its first life this week when a retired Royal Thai Navy SEAL died from lack of oxygen while making a supply delivery to the boys.

In the business world, computer company Dell made moves to go public while bypassing a traditional IPO process, Barnes & Noble fired CEO Demos Parneros for undisclosed violations of company policy, and the United States officially kicked off a trade war with China, imposing tariffs on $34 billion worth of goods, which led to China imposing the same amount of tariffs on U.S. goods, including agricultural and auto products.

In other news, basketball star LeBron James signed a $154 million deal to leave the East Coast and join the Los Angeles Lakers, ride share company Lyft purchased bike share company Motivate, launching Lyft Bikes in the process, and the World Cup geared up for the quarterfinals.

Top line: “Environmental Protection Agency Administrator Scott Pruitt has resigned after months of ethics controversies, citing “the unrelenting attacks” on himself and his family, which “have taken a sizable toll on all of us.” President Donald Trump first tweeted the news Thursday that Pruitt had resigned.”

Top line: “The Trump administration said Tuesday that it was abandoning Obama administration policies that called on universities to consider race as a factor in diversifying their campuses, signaling that the administration will champion race-blind admissions standards. In a joint letter, the Education and Justice Departments announced that they had rescinded seven Obama-era policy guidelines on affirmative action, which, the departments said, “advocate policy preferences and positions beyond the requirements of the Constitution.”” 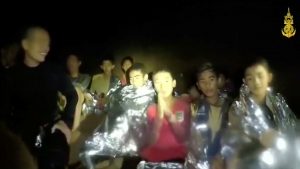 4. Why 12 Thai boys are still trapped in a cave, days after being found – Vox, Radhika Viswanathan

Top line: “Twelve Thai boys and their soccer coach who’d been missing for nine days were found trapped in a cave a half a mile below the surface by a team of British divers on Monday night. The world rejoiced. But as of Friday, the boys were still stuck in the flooded Tham Luang Nang Non cave system in northern Thailand. There are about 2.5 miles of flooded cave between them and the cave’s mouth. While they’re currently on safe ground above the floodwater, more monsoon rains are expected this weekend, and the cave system could be flooded for up to four months. The mission to rescue them is an extraordinary international operation with hundreds of cave and rescue experts and military personnel from several different countries, including the United States, pitching in.” 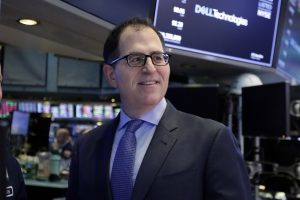 Michael Dell, right, CEO of Dell Technologies, visits the post that trades his company on the floor of the New York Stock Exchange, Monday, July 2, 2018. Dell is going public again after a five-year sojourn as a privately held company. (AP Photo/Richard Drew)

Top line: “Dell Technologies Inc said on Monday it would pay $21.7 billion in cash and stock to buy back shares tied to its interest in software company VMware Inc (VMW.N), returning the computer maker to the stock market without an initial public offering. The transaction will allow Dell to bypass the traditional IPO process, which would likely have involved grilling by stock market investors over Dell’s $52.7 billion debt pile. It also means Dell will not have to raise any new money. . .Going public gives Michael Dell and Silver Lake the option to eventually sell down their stakes, even as they affirmed on Monday that they had no plans to do so. Following the deal, Michael Dell will own 47 percent to 54 percent of the combined company, while Silver Lake will own between 16 percent and 18 percent.”

Top line: “President Donald Trump threatened to impose tariffs on every single Chinese import into America as the world’s two largest economies exchanged the first blows in a trade war that isn’t set to end anytime soon. After months of rhetoric, a 25 percent levy on $34 billion of Chinese goods entering the U.S. took effect just after midnight Washington time on Friday with farming plows and airplane parts among the products targeted. China hit back immediately via duties on U.S. shipments including soybeans and automobiles. Neither side shows any signs of backing down.”

Top line: “Barnes & Noble, the nation’s largest store-based book retailer, unexpectedly announced the termination of its CEO, Demos Parneros, Tuesday saying he had violated company policies. The company’s statement did not cite the violation that led to Parneros’ dismissal. Reached for comment, Senior Vice President Mary Ellen Keating said she couldn’t discuss the matter further. Parneros will not receive any severance payments after his departure and he is no longer a member of the company’s board of directors. He will not be replaced in the interim by an individual, but rather that his duties will be shared by several executives, including Chief Financial Officer Allen Lindstrom.”

Top line: “LeBron James‘ next NBA chapter will be set on the West Coast. James will be playing for the Los Angeles Lakers on a four-year, $153.3 million contract. He will try to bring the storied franchise another championship. The announcement was made through his agency, Klutch Sports Group, which announced the deal as $154 million.”

9. With its acquisition of Motivate, Lyft gets in on bike share – Fast Company, Eillie Anzilotti

Top line: “Lyft has inked a deal to acquire Motivate, the largest bike-share system operator in North America, and the parent company of well-loved networks like New York’s Citi Bike and Chicago’s Divvy. As part of the deal, all of Motivate’s city contracts will transfer to Lyft, which will also incorporate the bike-share company’s corporate structure and technology. Motivate’s maintenance and servicing operations will remain separate. The deal comes at a time when more and more cities are recognizing the value of trying to reduce private-car ownership and usership–something Lyft and Motivate claim as one of their core business goals.”

10. The Eight X Factors for the World Cup Quarterfinals – The Ringer, Ryan O’Hanlon

Top line: “From Paul Pogba to Raheem Sterling, which players could push their teams into the final four? Let’s take a look at one player on each team who could have an outsize effect on his country’s quarterfinal fortunes.”

~HeatherC is reading about The Best Long Reads by Bloomberg