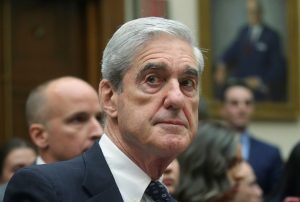 Former Special Counsel Robert Mueller testified before Congress and the nation for seven hours, discussing the investigation he oversaw into Russia’s election meddling during the 2016 presidential race and President Donald Trump’s reactions.

The U.S. and Guatemala signed an agreement that would increase cooperation between the two countries on the issue of migrants and asylum seekers from Central America.

Political leadership saw turnover across the world, with the United Kingdom getting a new prime minister in Boris Johnson, Puerto Rico Governor Ricardo Rosselló agreeing to resign after weeks of protests, acting Secretary of Defense Mark Esper confirmed to take over the role permanently, and former Delta executive and lobbyist Stephen Dickson confirmed to lead the Federal Aviation Administration.

In business news, a proposed merger between mobile phone carriers T-Mobile and Sprint got approval from the Justice Department, credit check company Equifax agreed to a $700 million settlement over its massive data breach in 2018, and Facebook was fined $5 billion by the Federal Trade Commission over privacy violations.

Top line: “Robert S. Mueller III offered no new revelations on Wednesday into Russia’s interference in the 2016 elections or President Trump’s attempts to derail his probe. But he offered a stark warning on Russian election tampering — “They’re doing it as we sit here” — and a sober assessment of where politics are after the Trump campaign welcomed foreign interference in 2016. “I hope this is not the new normal,” he told Representative Peter D. Welch, Democrat of Vermont, “but I fear it is.” In seven hours of highly anticipated back-to-back hearings before the House Judiciary and Intelligence Committees, Mr. Mueller, the special counsel who led the probe into Russia’s interference and whether Trump associates participated in it, hewed tightly to his script — the 448-page report he and his team produced in April. He declined repeatedly to offer his opinion on key questions or even to read directly from the voluminous document.”

Top line: “The federal government has ordered the death penalty to be reinstated for the first time in nearly two decades, as Attorney General William Barr directed the Bureau of Prisons to schedule the execution of five inmates after adopting an updated execution protocol. After 16 years without an execution, Barr has directed the head of the Bureau of Prisons to execute “five death-row inmates convicted of murdering, and in some cases torturing and raping, the most vulnerable in our society — children and the elderly” in December and January, according to a statement from the Department of Justice. The government’s move is likely to reignite legal challenges to the specific protocol and reinvigorate a debate concerning the constitutionality of lethal injection. The death penalty is legal in 29 states and the federal government, though there have been no federal executions in nearly two decades and the number of people facing state executions has been on the decline.” 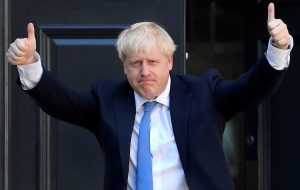 Boris Johnson after being announced as Britain’s next Prime Minister, in London, July 23, 2019. (REUTERS/Toby Melville)

Top line: “Boris Johnson has given key cabinet roles to leading Brexiteers after becoming the UK’s new prime minister. Earlier, Mr Johnson said the Brexit “doomsters and gloomsters” were wrong and the UK would leave on 31 October. Speaking outside No 10, he said the UK would meet that deadline “no ifs, no buts”, adding: “The buck stops with me.” Mr Johnson then turned his attention to a radical overhaul of the government, with 17 of Mrs May’s former senior ministers being axed or stepping down. The BBC’s chief political correspondent Vicki Young said the sackings suggested Mr Johnson wasn’t looking to build bridges across the party. Instead, she said, he was focused above all else on assembling the team he thought would bring about the results he needed, even if that was controversial. As the upheaval in government was happening, hundreds of people gathered outside the gates of Downing Street in protest against Mr Johnson’s appointment.”

Top line: “U.S. President Donald Trump on Friday said he agreed to drop the threat of economic sanctions against Guatemala after the country agreed to apply new migration measures to citizens from Honduras and El Salvador. The Trump administration has grappled with a surge of mainly Central American migrants claiming asylum at the United States’ southern border with Mexico, an influx that has made it difficult for Trump to restrict immigration as he promised when he was elected. Trump had wanted Guatemala to sign what is known as a safe third country agreement to require asylum seekers to first pursue safe haven in a third country through which they had traveled on the way to the United States. Guatemala’s Constitutional Court ruled that such a deal could not be signed without prior approval from the country’s Congress, which is on a summer recess. Trump told reporters on Friday that Guatemala had signed a safe third country agreement, but the Guatemalan government did not use that term. It said that the new measures applied only to Honduran and Salvadoran citizens.” 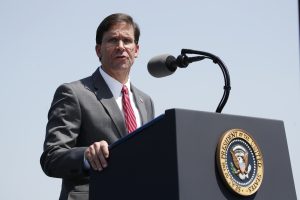 Secretary of Defense Mark Esper speaks during a full honors welcoming ceremony for him at the Pentagon, Thursday, July 25, 2019, in Washington. President Donald Trump attended the ceremony. (AP Photo/Alex Brandon)

Top line: “The Senate overwhelmingly confirmed President Donald Trump’s nominee to be Defense secretary, Mark Esper, on Tuesday, giving the Pentagon a permanent leader for the first time in nearly seven months. The vote was 90 to 8. Now Trump’s Army secretary, Esper saw strong bipartisan support despite questions about his ties to Raytheon, a top defense contractor where he had worked as a top lobbyist. Esper’s confirmation brings to a close the longest period without a Senate-confirmed Defense secretary in Pentagon history. The Defense Department has had three acting secretaries, including Esper, since Jim Mattis resigned in December.”

Top line: “President Donald Trump’s pick to lead the Federal Aviation Administration was confirmed by the Senate on Wednesday, a vote that hands the former Delta Air Lines executive the reins of an agency in turmoil after two fatal Boeing 737 Max crashes. Democratic lawmakers had opposed the nomination of Stephen Dickson, Delta’s former senior vice president of flight operations, citing a lawsuit brought by a Delta pilot who accused the airline of retaliating against her for flagging safety concerns during Dickson’s tenure. Delta said it does not tolerate retaliation against employees who raise those concerns. The FAA hasn’t had a permanent chief since January 2018.” 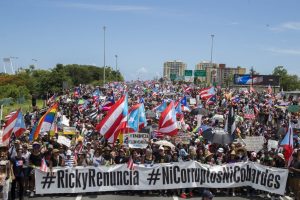 Thousands of Puerto Ricans gather for one of the biggest protests ever seen in the U.S. territory, with irate islanders pledging to drive Gov. Ricardo Rossello from office. (AP Photo/Dennis M. Rivera Pichardo)

Top line: “The governor of Puerto Rico announced late Wednesday that he will resign effective Aug. 2, amid intense pressure from inside and outside his government, after a series of leaked chat messages denigrating his opponents and Hurricane Maria victims triggered outrage from frustrated citizens who had taken to the streets for 13 consecutive days of protests. Ricardo Rosselló had defied calls for his resignation as the island descended into upheaval. He lost support from nearly everyone in his ruling statehood party, and more than a dozen members of his administration had stepped down in recent days, including his chief of staff on Tuesday.”

Top line: “The Department of Justice has approved T-Mobile’s deal to acquire Sprint, requiring the companies to divest some assets that Dish Networks can use to build a new fourth national U.S. wireless network. T-Mobile and Sprint have argued that a combination of their resources will help them compete with market leaders Verizon and AT&T. Opponents of the deal argued that it will reduce competition. The Justice Department and five states reached the settlement with Sprint and T-Mobile.”

Top line: “Equifax’s $700 million settlement with the U.S. government over a massive 2017 data breach includes up to $425 million for consumers. The breach was one of the largest ever to threaten private information, affecting 147 million people. The compromised data included Social Security numbers, birth dates, addresses, driver license numbers, credit card numbers and in some cases, data from passports. Criminals can use those bits of personal information to commit identity theft. Monday’s settlement gives affected consumers free credit-monitoring and identity-restoration services for the next several years. They may also be eligible for money for their time or reimbursement for certain services.”

Top line: “The Federal Trade Commission formally announced its $5 billion settlement with Facebook on Wednesday morning, which is the culmination of a years-long investigation into the Cambridge Analytica scandal and other privacy breaches. The FTC alleges that Facebook violated the law by failing to protect data from third parties, serving ads through the use of phone numbers provided for security, and lying to users that its facial recognition software was turned off by default. In order to settle those charges, Facebook will pay $5 billion — the second-largest fine ever levied by the FTC — and agree to a series of new restrictions on its business.”