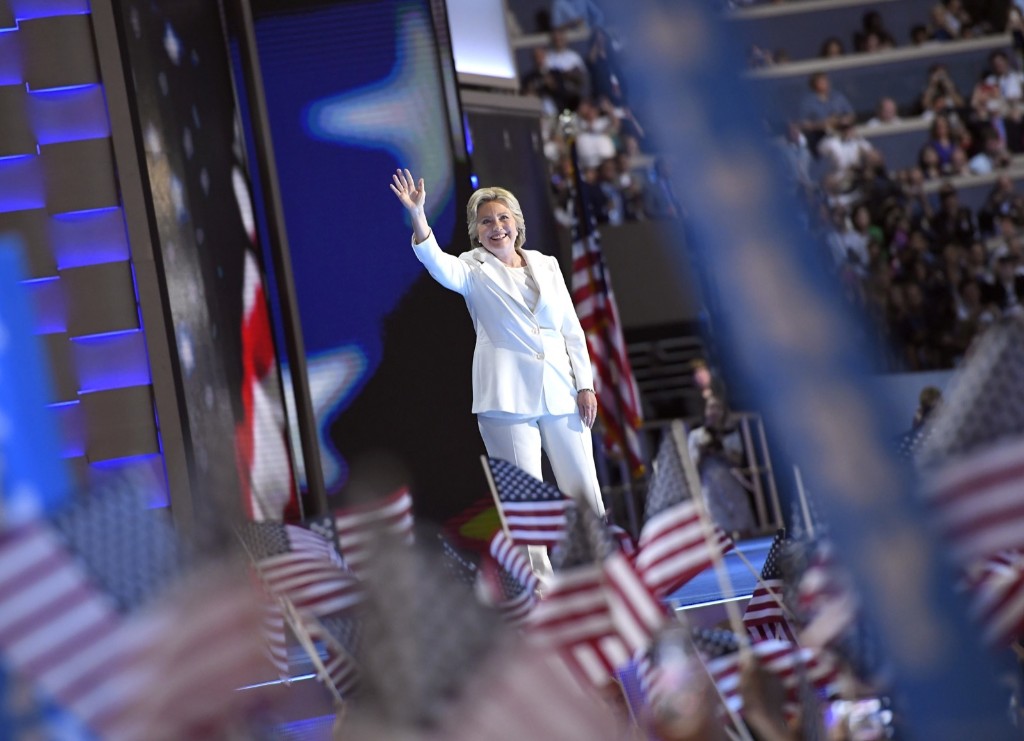 Hillary Clinton takes the stage during the final day of the Democratic National Convention in Philadelphia. AP Photo/Mark J. Terrill

Hillary Clinton made history this week at the Democratic National Convention, becoming the first female nominee of a major U.S. party. She accepted her place in history after a week of testimonials and high-profile endorsements from President Barack Obama, first lady Michelle Obama, former President Bill Clinton and Vice President Joe Biden, among others. But the four-day event was not without controversy, including the resignation of DNC Chairwoman Rep. Debbie Wasserman Schultz, whose announcement came after leaked DNC emails were released. Consistent boos and protests largely from supporters of former presidential candidate and Sen. Bernie Sanders also made headlines. Read about the DNC highlights below and the other biggest stories of the week, as they appeared in this week’s Daily Edition.

Top line: “She had accepted the Democratic nomination with ‘humility, determination and boundless confidence in America’s promise,’ taking her place as the first woman to lead a major presidential ticket on a night pulsating with emotion.

‘When there are no ceilings,’ she declared, ‘the sky’s the limit.’

Her speech lacked the poetic sweep of the President Barack Obama’s address Wednesday, but it was in keeping with someone who presents herself as a practical, dogged, policy-oriented striver who gets knocked down and then gets straight back up.

The choice she defined for the nation in 2016 is stark: a ‘moment of reckoning.'” 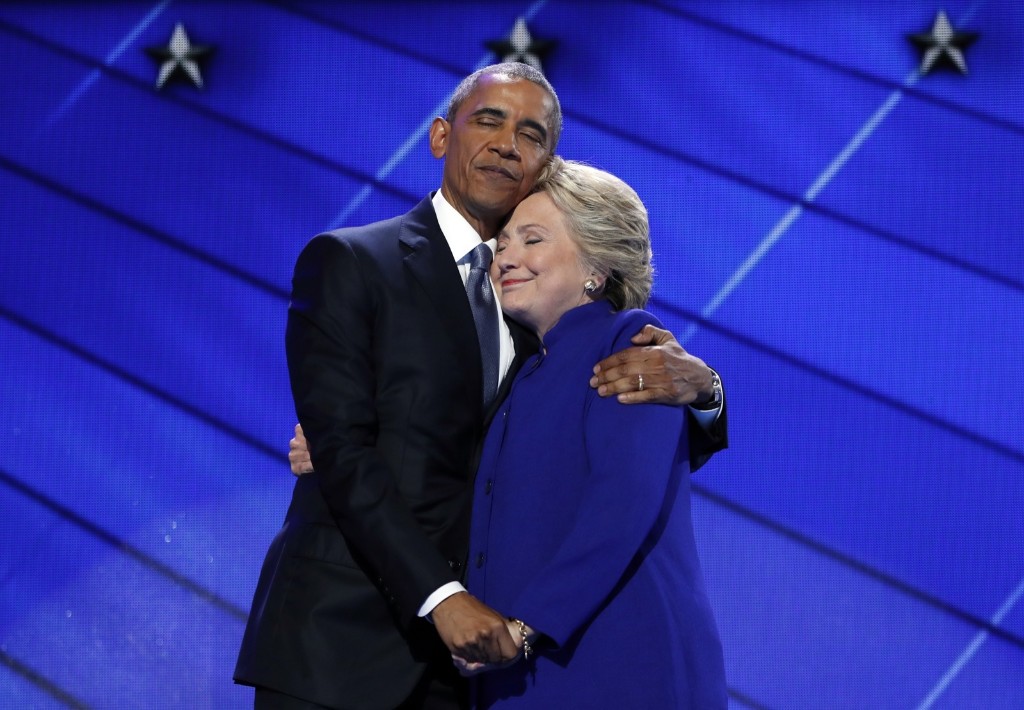 2. Obama shares his positive vision of a nation whose diversity is a strength—The Washington Post, David Nakamura

Top line: “Twelve years to the day after President Obama first offered Americans the promise of moving beyond paralyzing partisanship, he took the stage here at the Democratic National Convention at a time when the nation is more starkly polarized than before.

But instead of shying away from the themes he spoke so eloquently about in 2004, the president returned directly to them in his 44-minute address on Wednesday.

In a pointed rebuke to Republican presidential nominee Donald Trump, Obama argued that the common American values and ideals he identified in his first national address remain as true today as they did then — even if it’s hard to see them.” 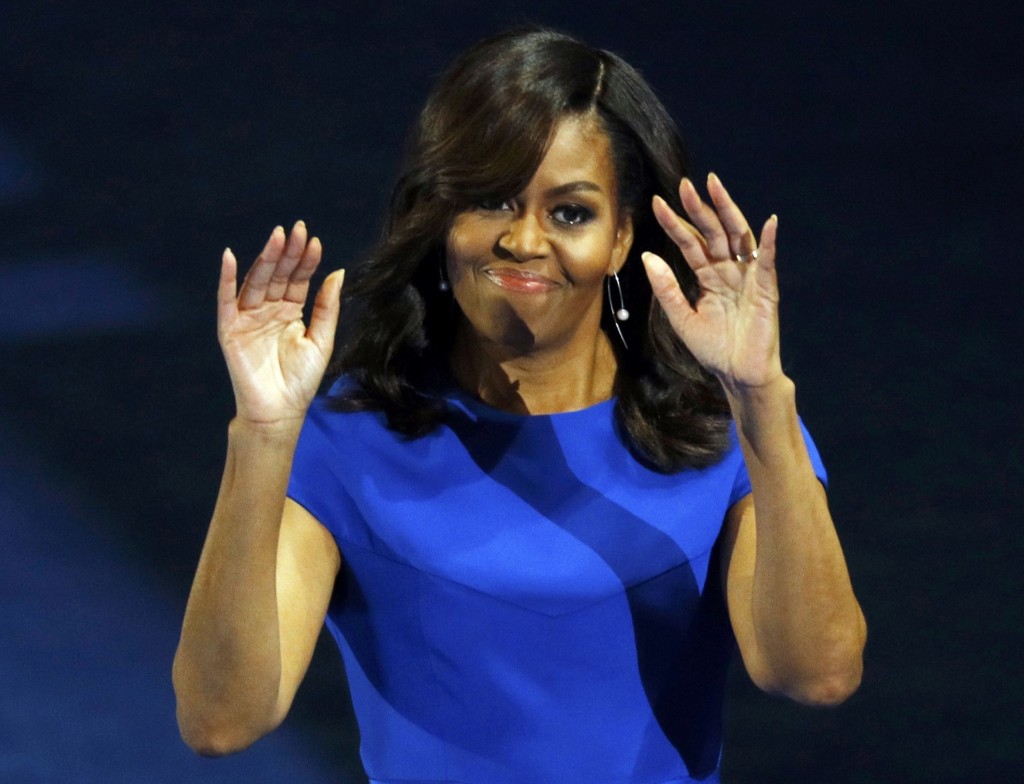 Top line: “Michelle Obama, the first black first lady in American history, gave a 15-minute address to the Democratic national convention that drew cheers, left some delegates openly weeping and did more than any governor or congressman to unite and fire up the party for November’s presidential election.”

Top line: “One government official equated the hack against one of America’s main political parties to an assault on the nation’s “critical infrastructure,” such as the electrical grid.

The FBI’s terse statement confirming the investigation came just three days after Wikileaks published a trove of nearly 20,000 internal DNC emails that showed its leaders privately favoring former Secretary of State Hillary Clinton over her rival, Sen. Bernie Sanders, in the party’s primary. The embarrassing emails forced the resignation over the weekend of the party’s chairwoman, Rep. Debbie Wasserman Schultz.”

Top line: “Debbie Wasserman Schultz will step down as chairwoman of the Democratic National Committee at the conclusion of this week’s convention, the Florida congresswoman said Sunday in a statement.

The announcement follows the growing controversy over the release of party emails that at times depicted staffers favoring Hillary Clinton over Bernie Sanders during the primary campaign.”

Top line: “After a months-long bidding process and many layoffs, Yahoo has finally found a buyer. Verizon (which owns AOL, which owns TechCrunch) is officially acquiring Yahoo’s core business for $4.83 billion in cash, which includes Yahoo’s advertising, content, search and mobile activities.”

Top line: “Four cases of Zika infection in Miami are highly likely to have been caused by infected mosquitoes, the state Department of Health said Friday — the first documented instance of local transmission in the continental United States.

Officials in Florida believe that the area of active transmission is limited to a one-square-mile area just north of downtown Miami. No mosquitoes tested have been found carrying the Zika virus, and the department is going door to door in the neighborhood collecting urine samples to test residents.”

Top line: “French prosecutors have identified the second man involved in the killing of a priest in a Normandy church on Tuesday as 19-year-old Abdel Malik Petitjean.

Like the other attacker, Adel Kermiche, he was known to the security services. The teenagers were shot dead by police outside the church in Saint-Etienne-du-Rouvray where they had killed Father Jacques Hamel, 86, and taken hostages.

So-called Islamic State (IS) released a video of what it said were the two men pledging allegiance to the group.”

Top line: “Nineteen people were killed and 25 were injured by a man with a knife early Tuesday at a facility for disabled people in Japan, officials said…The stabbings occurred early Tuesday morning at Tsukui Yayayurien — a facility with 160 residents — in Sagamihara, west of Tokyo, Shinya Sakuma, Director of Health and Welfare for Kanagawa Prefecture, told reporters during a news conference.”

Top line: “John W. Hinckley Jr., who tried to assassinate PresidentRonald Reagan in 1981, will be allowed to live permanently with his elderly mother in Williamsburg, Va., leaving the psychiatric hospital where he has been imprisoned for several decades, a federal judge ruled on Wednesday.

Judge Paul L. Friedman of the United States District Court for the District of Columbia wrote in his opinion that Mr. Hinckley, 61, no longer posed a danger to himself or others. The release should begin no sooner than Aug. 5, the judge said.”