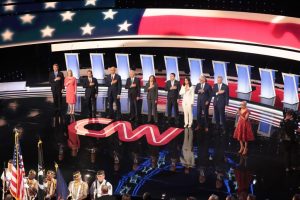 The candidates take the stage for the second night of the debate. (Scott Olson/Getty Images)

President Donald Trump marked a few domestic accomplishments this week. First, he signed off on a bipartisan budget bill that would raise the debt ceiling and fund government for another two years. He also saw his nominee for U.S. ambassador to the United Nations, Kelly Craft, confirmed by the Senate.

Foreign relations news was more mixed: Trump escalated the trade war with China by announcing a new 10 percent tariff on the remaining $300 billion in imports, sparking promises of retaliation, the U.S. and European Union agreed to a trade deal on beef exports, and the U.S. and Russia scrapped a Cold War-era nuclear treaty that restricted nuclear development.

On the issue of immigration, Attorney General William Barr announced new restrictions for asylum seekers—deciding that threats to the life of a family member is not a legitimate credible fear claim.

In other news, the second round of debates between the Democratic presidential candidates took place, Capital One announced a data breach that affected millions of U.S. and Canadian users, and Texas Congressman John Ratcliffe, who was Trump’s nominee to replace Dan Coats as spy chief, withdrew from consideration.

Top line: “President Donald Trump on Friday signed into law a two-year budget deal that raises spending limits and suspends the debt ceiling for two more years. The GOP-controlled Senate approved the bill, 67-28, on Thursday, after the Democratic-controlled House approved it, 284-149, last week. The bill allows for a $320 billion increase in government spending, a number that rankled most Republicans in Congress and prompted many to vote against the deal. It also suspends the debt ceiling through mid-2021. Senate Majority Leader Mitch McConnell, R-Ky., and Trump had urged Republicans to support the bill.”

2. Winners and losers from Night 2 of the second Democratic debate – The Washington Post, Aaron Blake

Top line: “Wednesday night concluded the second Democratic primary debate of the 2020 election, with Sens. Cory Booker (N.J.) and Kamala D. Harris (Calif.) and former vice president Joe Biden as the headlining candidates. None of them turned in a resounding performance. Below are some winners and losers.” 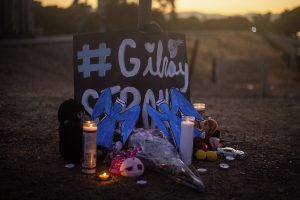 Top line: “The smell of barbecue was wafting through the air, a local rock band was playing its last song and parents were collecting their children at the end of the annual garlic festival in Gilroy, Calif., on Sunday when a gunman opened fire, killing three people. Stephen Romero, a 6-year-old boy from San Jose who loved Legos and Batman, had been playing near a bounce house with his mother and grandmother before he was killed. A 13-year-old girl and a man in his 20s were the other victims, police said Monday. The gunman also wounded 12 people before he was fatally shot in an exchange with three police officers, who had responded within one minute, the police chief said. Chief Smithee identified the gunman as Santino William Legan, 19, a resident of Gilroy, about 30 miles southeast of San Jose. The chief said the gunman’s motive was not known.”

4. China has ‘few good options’ to hit back against new US tariffs – CNN, Rishi Iyengar

Top line: “The trade war is back on. China on Friday slammed President Donald Trump’s decision to slap a 10% tariff on $300 billion worth of goods, effectively taxing all Chinese exports to the United States. Beijing said it was ready for a fight. Beijing may be able to cope with the fallout from an escalating fight between the world’s two biggest economics, but it faces more constraints than Washington and will have to calibrate retaliation carefully. Here’s what China could do next.”

5. Trump announces deal to expand US beef exports in the EU — and jokes about Mercedes, BMW tariffs – CNBC, Jacob Pramuk

Top line: “President Donald Trump announced an agreement Friday to boost beef exports to the European Union. Surrounded by trade officials and beef industry representatives at the White House, Trump signed a deal to “lower trade barriers in Europe and expand market access for American farmers and ranchers.” Over the course of the agreement, annual duty-free U.S. beef exports to the EU are expected to nearly triple to $420 million from $150 million, according to the Office of the U.S. Trade Representative. The agreement comes as the agriculture industry has taken a hit from Trump’s ongoing trade war with China. The president has tried to limit the economic and political damage from the conflict ahead of the 2020 election. His administration recently announced details of a $16 billion aid package for farmers affected by the trade conflict.” 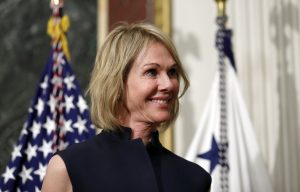 In this Sept. 26, 2017, file photo, U.S. Ambassador to Canada Kelly Knight Craft stands during her swearing in ceremony in the Indian Treaty Room in the Eisenhower Executive Office Building on the White House grounds in Washington. The Senate has confirmed Craft to become the next U.S. envoy to the United Nations. (AP Photo/Alex Brandon, File)

Top line: “The Senate has confirmed Kelly Craft to become the next U.S. envoy to the United Nations despite Democratic concerns about her inexperience and potential conflicts of interest. Craft, a longtime GOP activist from Kentucky, is currently U.S. ambassador to Canada. She was confirmed 56-34, ending a more than seven-month vacancy in the key diplomatic position. She and her husband, Joe Craft, have donated millions of dollars to Republican political candidates, and she will be first major political donor to occupy the top U.N. post for any administration. Joe Craft is the chief executive of Alliance Resource Partners, one of the largest coal producers in the country.” 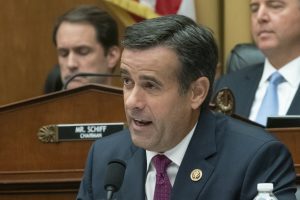 In this Wednesday, July 24, 2019 photo, Rep. John Ratcliffe, R-Texas, a member of the House Intelligence Committee, questions former special counsel Robert Mueller as he testifies to the House Intelligence Committee about his investigation into Russian interference in the 2016 election, on Capitol Hill in Washington. President Donald Trump announced Sunday, July 28 that he will nominate Rep. Ratcliffe to replace Director of National Intelligence Dan Coats, who is leaving his job next month. (AP Photo/J. Scott Applewhite)

Top line: “President Donald Trump said Friday that Rep. John Ratcliffe is withdrawing his bid to become Director of National Intelligence, days after the president floated his name. The announcement comes after Democrats and some Republicans have raised questions about whether the Texas congressman exaggerated his work as federal prosecutor of terrorism cases. Others questioned Ratcliffe’s experience and whether he could give the president unvarnished advice on Russia given his strong partisan views. Trump said he thought Ratcliffe “was being treated very unfairly.” Trump announced Sunday that Dan Coats, a former Indiana senator who has held the job since early 2017, would step down this month. Disagreements between Coats and Trump on Russia, North Korea and other matters have often spilled into public view.”

Top line: “The US has formally withdrawn from a key nuclear treaty with Russia, raising fears of a new arms race. The Intermediate-Range Nuclear Forces Treaty (INF) was signed by US President Ronald Reagan and Soviet leader Mikhail Gorbachev in 1987. It banned missiles with ranges between 500 and 5,500 km (310-3,400 miles). But earlier this year the US and Nato accused Russia of violating the pact by deploying a new type of cruise missile, which Moscow has denied. The Americans said they had evidence that Russia had deployed a number of 9M729 missiles – known to Nato as SSC-8. This accusation was then put to Washington’s Nato allies, which all backed the US claim.”

Top line: “A decision issued Monday by Attorney General William Barr will restrict the ability of migrants to claim asylum based on their family relations. In a precedent-setting immigration court opinion, Barr said that simply being part of a nuclear family targeted for persecution doesn’t qualify as a “particular social group” eligible for asylum in the United States. “The fact that a criminal group — such as a drug cartel, gang, or guerrilla force — targets a group of people does not, standing alone, transform those people into a particular social group,” the attorney general wrote. President Donald Trump has sought to restrict access to asylum, which his administration views as a magnet that draws migrants north from Guatemala, Honduras and El Salvador. Former Attorney General Jeff Sessions issued a similar immigration court decision in June 2018 that blocked asylum for victims of domestic violence and gang violence.”

10. Capital One data breach: What you can do following the banking hack – CNET, Clifford Colby

Top line: “A data breach to Capital One servers last month exposed the personal information of nearly 106 million of the bank’s customers and applicants. The hack included US and Canadian customers of the banking and credit card company. The breach on July 19 resulted in the hacker gaining access to personal information related to credit card applications from 2005 to early 2019 for consumers, applicants and small businesses. Among the personal data exposed were names, addresses, dates of birth, credit scores, transaction data, Social Security numbers and linked bank account numbers. About 140,000 Social Security numbers and 80,000 linked bank account numbers were exposed, Capital One said. And for Canadian credit card customers and applicants, approximately 1 million Social Insurance Numbers. Capital One said, however, that no credit card account numbers or login credentials were revealed in the hack.”