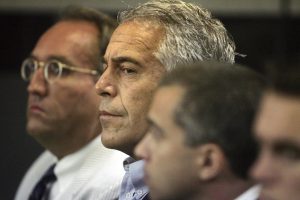 Billionaire Jeffrey Epstein was arrested and hit with federal charges of child sex trafficking. The ensuing scrutiny of his friends and associates led to U.S. Labor Secretary Alexander Acosta resigning from office amid criticism of a plea deal Acosta crafted in 2008 in Florida that allowed Epstein to plead to lesser charges and avoid a long prison sentence.

Kim Darroch, the United Kingdom’s ambassador to the U.S., resigned this week after President Donald Trump vowed to no longer work with him following the leak of memos wherein Darroch told his bosses that the Trump administration was “inept.”

Trump ended his months-long effort to add a citizenship question to the 2020 census, instead issuing an executive order requiring other federal agencies to provide citizenship information to the Commerce Department.

In other political news, the field of Democratic candidates for president grew with the late entry of California billionaire and Trump critic Tom Steyer, former presidential candidate H. Ross Perot died at the age of 89, and the House Judiciary Committee issued subpoenas for several Trump staffers in their ongoing obstruction probe.

In sports, the U.S. women’s soccer team triumphed at the Women’s World Cup and began a nationwide tour in celebration. 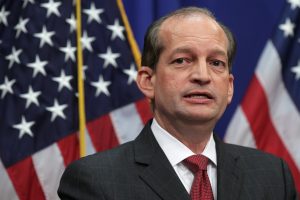 Top line: “Labor Secretary Alex Acosta resigned Friday amid intense scrutiny of his role as a U.S. attorney a decade ago in a deal with Jeffrey Epstein that allowed the financier to plead guilty to lesser offenses in a sex-crimes case involving underage girls. President Trump told reporters Friday morning that Acosta had decided to step aside. He called Acosta a “great labor secretary, not a good one” and a “tremendous talent.” Acosta, the only Hispanic in Trump’s Cabinet, said he had submitted his resignation to take effect in a week. Acosta will be the 13th Cabinet member named by Trump to depart the administration, not counting those who served in an acting capacity. Trump said that Patrick Pizzella, the deputy secretary of labor, will become acting secretary of the department.”

Top line: “Jeffrey Epstein has long been an enigma, his ascent shrouded in mystery. Just how a middle-class Brooklyn math whiz became a Wall Street master of high finance with friends in very high places has been a subject of tabloid speculation for years. Now, the details of Epstein’s life and his alleged predilections are coming into sharper focus as federal prosecutors in New York pursue sex-trafficking charges accusing the 66-year-old billionaire of recruiting and abusing dozens of underage girls at his mansions in New York and Palm Beach, Florida, in the early 2000s. Epstein, who pleaded not guilty Monday, could get up to 45 years in prison if convicted.” 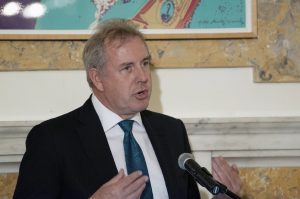 In this Friday, Oct. 20, 2017, file photo, British Ambassador Kim Darroch hosts a National Economists Club event at the British Embassy in Washington. Britain’s ambassador to the United States resigned Wednesday, July 10, 2019, just days after diplomatic cables criticizing President Donald Trump caused embarrassment to two countries that often celebrate having a “special relationship.” The resignation of Kim Darroch came a day after Trump lashed out at him on Twitter describing him as “wacky” and a “pompous fool” after leaked documents revealed the envoy’s dim view of Trump’s administration. (AP Photo/Sait Serkan Gurbuz, FIle)

Top line: “The resignation of Sir Kim Darroch as the UK’s ambassador to the US after controversy over leaked memos in which he criticized Donald Trump could have a chilling effect on international diplomacy, experts have warned. Veteran diplomats defended Darroch’s confidential memos – in which he referred to the Trump administration as “incompetent” and “inept” – as the nature of an ambassador’s job. Darroch submitted his resignation on Wednesday, three days after his private assessments of the Trump administration were leaked to the Mail on Sunday. In addition to characterizing the current administration as “dysfunctional”, Darroch said the US president “radiates insecurity”.”

Top line: “President Donald Trump retreated from his quest to add a question about US citizenship to the 2020 census on Thursday, instead asking government agencies to provide records that could determine a head-count of citizens without polling census-takers directly. The turnaround comes after Trump repeatedly said he would continue fighting to insert the question despite a Supreme Court ruling that dealt a blow to the effort last month. It reflects legal reality intersecting with Trump’s desire to bolster his image as an immigration hard-liner as he moves ahead with his 2020 reelection bid. Instead of attempting to put the question on census forms, or adding it separately, Trump issued an executive order directing the Commerce Department to obtain citizenship data through means other than the census. That includes documents from the Department of Homeland Security, which houses citizenship and asylum services, and the Social Security Administration.”

Top line: “Iran threatened on Monday to restart deactivated centrifuges and ramp up enrichment of uranium to 20% purity in a move away from the 2015 nuclear deal, but the head of Iran’s Revolutionary Guards insisted the world knows Tehran is not pursuing nuclear arms. The threats to ramp up enrichment, made by Tehran’s nuclear agency spokesman, would go far beyond the small steps Iran has taken in the past week to nudge stocks of fissile material just beyond limits in the pact that Washington abandoned last year. They would reverse the major achievements of the agreement, intended to block Iran from making a nuclear weapon, and raise serious questions about whether the accord is still viable.” 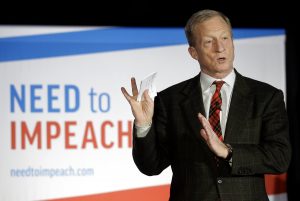 In this March 13, 2019, photo, billionaire investor and Democratic activist Tom Steyer speaks during a “Need to Impeach” town hall event in Agawam, Mass. Steyer announced Monday, June 24 that he will put $1 million toward registering millennial voters in Virginia. Steyer’s liberal advocacy group, NextGen America, will engage young voters in Republican-held districts in the hopes of flipping the Republican-led General Assembly to the Democrats in November. (AP Photo/Steven Senne, File)

Top line: “Billionaire activist Tom Steyer declared his candidacy for the presidency Tuesday in a video, reversing an earlier announcement several months ago that he intended to sit out the 2020 Democratic primary race. While he is not well known and the candidate field is already overstuffed with two dozen candidates, Steyer’s money could give him an edge, as could the extensive email list of 8.3 million names compiled by a group he founded to push for the impeachment of President Donald Trump. He has committed to spending at least $100 million of his own money on his campaign and has already bought $1 million in TV advertising in the first four primary and caucus states, according to ad tracker Advertising Analytics.”

Top line: “President Trump issued a sweeping set of proposals aimed at improving medical care for the tens of millions of Americans who have kidney disease, a long-overlooked condition that kills more people than breast cancer. Mr. Trump signed an executive order directing federal agencies to educate and treat people with early forms of kidney disease, to make kidney transplants easier to get, and to shift the financial incentives for clinics and doctors away from the existing system that relies heavily on dialysis. The president set an ambitious goal to remake how Americans with kidney disease get treated, by aggressively seeking to lower the costs by encouraging in-home dialysis and organ donation. Both options are seen as better treatment for patients than clinic-based dialysis. However, transforming the area may prove daunting, and many previous efforts have fallen short.” 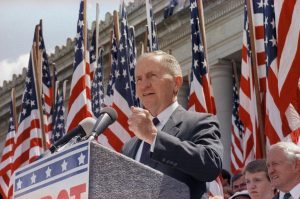 Presidential hopeful Ross Perot speaks to a crowd of about 6,000 supporters during a rally in Olympia, Wash., July 3, 1992. (AP Photo/Gary Stewart)

Top line: “Billionaire businessman, philanthropist and independent presidential candidate Ross Perot is dead at 89, CNBC has confirmed. Perot, who ran for president in 1992 and 1996, died after a five-month battle with leukemia, said James Fuller, a representative for the Perot family. Perot is survived by his wife, Margot, his five children and 16 grandchildren.”

Top line: “The House Judiciary Committee voted on Thursday to authorize subpoenas for 12 crucial witnesses as part of House Democrats’ ongoing investigations targeting President Donald Trump. On a party-line vote, the committee empowered Chairman Jerry Nadler (D-N.Y.) to issue subpoenas to current and former Trump administration officials who were central figures in former special counsel Robert Mueller’s 22-month investigation of Russian contacts with the Trump campaign. The subpoena list also includes Trump’s son-in-law and senior adviser Jared Kushner, in addition to some of Mueller’s key witnesses. The panel also authorized subpoenas for executives of American Media Inc., which was involved in hush-money payments to women who alleged that they had affairs with Trump. Nadler has not indicated when or whether he’ll issue the subpoenas.”

Top line: “The U.S. Women’s National Team is celebrating their World Cup championship with a ticker tape parade in New York City. Throngs of fans packed Manhattan’s famed “Canyon of Heroes” to greet the squad led by Megan Rapinoe. The parade started at 9:30 a.m. ET, when Rapinoe, Alex Morgan, Rose Lavelle and their teammates embarked from Battery Park on the southern tip of Manhattan. From there, the parade moved north up Broadway to City Hall, where a banner declared, “One nation. One team.” As the athletes and coach Jill Ellis made their way through the confetti, the cheers turned from a rumble into a roar. By the time they slowed to a stop at the corner of Broadway and Barclay St. near City Hall, the mood was one of joyful uproar — pandemonium under sunny skies.”

~ HeatherC is reading Focus by Medium