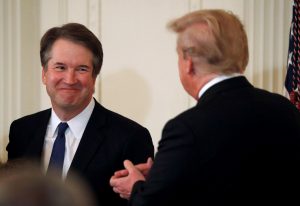 President Trump nominated Brett Kavanaugh to fill the U.S. Supreme Court seat being vacated by Kavanaugh’s former boss, Justice Anthony Kennedy. Kavanaugh has years of experience as an appeals court judge in Washington D.C., and has a strong reputation in conservative legal circles.

The president also announced the presidential pardon for Dwight Hammond Jr. and Steven Hammond, father-son cattle ranchers from Oregon who were convicted of arson on federal lands, and whose imprisonment led some fellow supporters to stage a 41-day armed occupation of a wildlife refuge.

Trump capped his week abroad, first with a confrontational appearance at the NATO summit of world leaders where he criticized Germany’s economic ties to Russia, and then with a visit to the United Kingdom, where he was met with protests and gave a newspaper interview critical of Prime Minister Theresa May’s handling of Brexit.

The world breathed a sigh of relief with the successful rescue of 12 Thai boys and their soccer coach from a flooded cave in Thailand after an international collaboration that took place over two weeks.

Business mergers continued to make headlines, as well. The Department of Justice filed an appeal against the previously approved merger of telecommunications and media giants AT&T and Time Warner, while Broadcom announced a $18.9 billion cash deal to acquire CA Technologies.

Emmy Award nominations were also announced, with “Game of Thrones” leading the nominees with 22 nods in its final season, and Netflix breaking HBO’s 17-year run of most shows in contention.

In other news, singer Justin Bieber and model Hailey Baldwin got engaged, Spanish soccer star Cristiano Ronaldo made official his defection from Real Madrid to Juventus, and France and Croatia prepare to face off for the World Cup 2018 championship, after they defeated Belgium and England, respectively in the semi-finals.

1. Trump Picked Kavanaugh. How Will He Change the Supreme Court? – POLITICO

Top line: “In the end, President Donald Trump made the expected choice: Brett Kavanaugh, a conservative jurist who has served on the U.S. Court of Appeals for the D.C. Circuit since 2006. Kavanaugh, a former clerk to the retiring Anthony Kennedy, has a sterling reputation in conservative legal circles, and a record to match. In his remarks announcing his pick, Trump suggested he had chosen Kavanaugh for his originalist conception of the law — a philosophy more in keeping with the late Antonin Scalia than with the more activist Kennedy. But how will Kavanaugh rule once he’s actually on the bench? We asked top legal thinkers to evaluate his record — and tell us how he might change America’s highest court.” 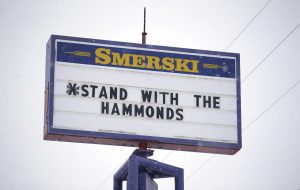 FILE – In this Jan. 5, 2016, file photo, a sign shows support for the Dwight and Steven Hammond in Burns, Ore. President Donald Trump on Tuesday, July 10, 2018, pardoned the two cattle ranchers convicted of arson in a case that case sparked the armed occupation of a national wildlife refuge in Oregon. Dwight and Steven Hammond were convicted in 2012 of intentionally and maliciously setting fires on public lands. (AP Photo/Rick Bowmer, file)

Top line: “President Trump on Tuesday pardoned father-and-son cattle ranchers in southeastern Oregon who were sentenced to serve prison time on two separate occasions for the same charges of arson on public lands, a move their supporters hailed as a shift in how the federal government approaches the West. Trump’s decision to set aside the convictions of Dwight Hammond Jr. and Steven Hammond could have major implications for how federal officials enforce rules on grazing and other activities on tens of millions of acres owned by taxpayers. The two men’s return to prison helped spark the 41-day occupation of the Malheur National Wildlife Refuge in early 2016.”

Top line: “Only a few hours into his trip to the U.K., Britons learned that the American president who had just shaken up NATO allies in Brussels was not out of the provocation business. Around the time a dinner in Mr. Trump’s honor was taking place at an Oxfordshire palace, word spread that he had given an interview highly critical of the dinner’s host. That would be Prime Minister Theresa May. And so ended Day 1.”

Top line: “The US government has decided to appeal against a landmark court ruling that cleared the way for telecoms giant AT&T to buy Time Warner. The ruling was a significant defeat for the US Justice Department, which had argued the deal would lead to less competition and higher consumer prices. A federal judge rejected those claims last month, allowing the takeover to go through without conditions. AT&T completed the $81bn (£60bn) deal shortly after. David McAtee, AT&T general counsel, said the company was surprised by the Justice Department move and would defend the court’s approval.”

Top line: “The big nomination numbers were raked in by familiar nominees: Game of Thrones was the leader with 22 nominations, Saturday Night Live and Westworld had 21, The Handmaid’s Tale 20. In comedy, Atlanta led with 16, but the next two spots went to first-year series: Amazon’s The Marvelous Mrs. Maisel with 14 and Barry right behind at 13… Approaching the Emmy nominations in particular — because of their sheer volume — as a reliable list of bests is a losing game. It will always end in disappointment over what wasn’t recognized. But a lot of these nominees are well worth watching for those who haven’t seen them, and the upside of the overstuffed TV landscape is that we’ll never lack worthy options.” 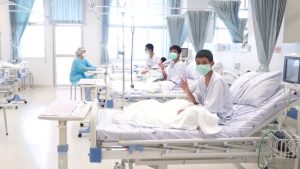 6. How the 12 Thai boys were finally rescued – Vox, Radhika Viswanathan

Top line: “The 12 Thai soccer players and their coach who have been trapped in a cave in northern Thailand for more than two weeks have all been rescued. “We are not sure if this is a miracle, a science, or what. All the thirteen Wild Boars are now out of the cave,” the Thai Navy SEALs posted on their Facebook page. The dramatic story of the boys who hiked into the Tham Luang Nang Non cave system on June 23 and then became trapped by floodwaters has riveted people around the world. It took an increasingly happy turn over the last three days, as an international team of divers brought out the boys in three stages. Tuesday’s rescue mission succeeded in retrieving the remaining four boys and the coach. The last people to emerge from the cave were a doctor and three members of the Thai Navy SEALs at 10 pm Tuesday local time. The boys are in good overall health, according to Thailand’s Ministry of Public Health.”

Top line: “Broadcom and CA Technologies on Wednesday announced that Broadcom has agreed to acquire the enterprise technology company for $18.9 billion in cash. The deal values CA stock at about $44.50 per share, or a premium of about 20 percent to the closing price of CA common stock on July 11. The acquisition represents a strategic win for Broadcom, furthering its mission to acquire “mission critical technology businesses,” following its failed takeover bid for rival Qualcomm. CA Technologies, which manufactures cloud-based and traditional enterprise software, could help diversify Broadcom, should it gain antitrust approvals in the U.S., the E.U. and Japan. The boards of both companies have already approved the deal.”

8. Justin Bieber Engaged to Hailey Baldwin: A Timeline of How She Went From His Friend to Fiancée – ET, Desiree Murphy

Top line: “Justin Bieber and Hailey Baldwin are making their love forever official. Over the weekend, fans couldn’t contain their excitement when news broke that the “Sorry” singer had proposed while the two were vacationing in the Bahamas. While many were ecstatic that Bieber put a ring on it, others were quick to comment on their seemingly whirlwind romance. Although Bieber, 24, and Baldwin, 21, have only recently rekindled their romance, the two have actually been friends for several years, and even dated in the past. Now, ET’s breaking down exactly how these lovebirds went from friends to forever lovers.”

9. The inside story on Ronaldo’s move from Madrid to Juventus – ESPN, Gabriele Marcotti

Top line: “This time, it’s real. This time, he’s gone. Gone after nine seasons, 450 goals, four Champions League titles and four Ballon d’Or awards. Cristiano Ronaldo’s move from Real Madrid to Juventus isn’t just the second-biggest transfer in history — the deal, once you factor in wages, transfer fee and commissions, will be comfortably north of $350 million, surpassed only by Neymar — it’s also an enormous gamble for everyone involved. Real Madrid lose their talisman, their alpha and omega, capable of scoring a goal per game last season. Juventus stretch their resources in an attempt to make a giant leap forward, abandoning the blueprint of organic growth that had guided them in the past seven seasons and, in a financial fair play world, rolling the dice that they won’t have to dismantle the squad. As for Ronaldo, his may be the biggest leap into the unknown.”

Top line: “When the 2018 World Cup began, France was 10-1 to win it all, while Croatia was an extreme long shot at 60-1. Entering the semis, those 2018 World Cup odds improved to 2-1 and 4-1, respectively. Now, a champion will be decided when the two squads meet Sunday at 11 a.m. ET. Before you lock in your 2018 World Cup picks for France vs. Croatia, you need to see what European football expert David Sumpter has to say. Sumpter is an applied mathematician who wrote “Soccermatics,” a book that explains how math works inside the sport. Along with other experienced analysts, Sumpter developed the powerful Soccerbot model.”

~HeatherC is reading about Summer Partying 101 by Bloomberg